To be the first person to “capture”/circle all of the aliens on their game board.

For a 2-5 player game only one of the shaker eggs, one of the shape dice, and one of the markers are used. Each player takes a game board. Younger players may use the side with geometric shapes while older players use the side with the aliens printed on it. One player is chosen to be the first alien hunter and is given the shape die and the marker. The player to the right of the first alien hunter gets the shaker egg. 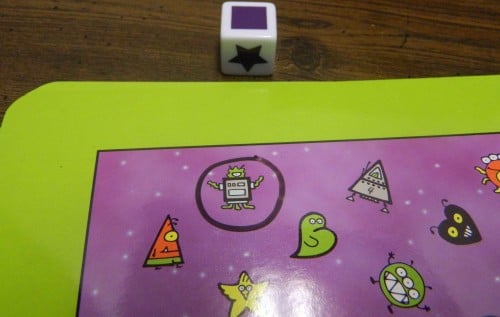 The player has rolled the square shape which allows them to start circling aliens with a square shape.

If a player rolls the “?” symbol they can choose one of the other shapes. 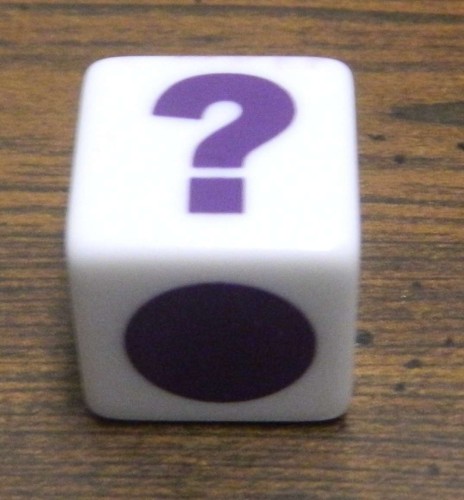 The current player has rolled the question mark symbol. The player can choose any of the other shapes to start circling. 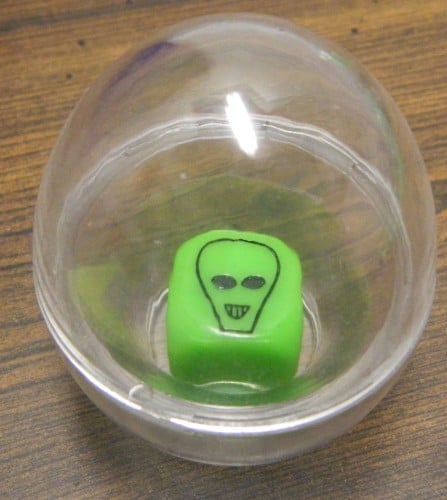 The alien symbol has been rolled. The shaker egg, shape die, and marker are passed one player to the right.

Play continues like this until one player has circled all of the aliens on their game board. This player has won the game. 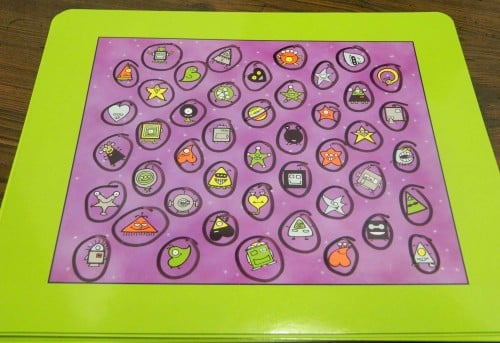 The current player has successfully circled all of the aliens on their game board. This player has won the game.

For a 6-10 player game both shaker eggs, shape dice, and markers are used. Two players on opposite sides of the table are chosen as the first two alien hunters. The player to the right of both players are given one of the shaker eggs.

The game plays like the 2-5 player game except that two sets of shape dice, shaker eggs and markers will be moving around the table. When a player rolls the alien head, only the player to their left passes the shape die and marker. If a situation occurs where a player has both a shape die and a shaker egg, they can choose which dice they want to focus on.

The first player to circle all of their aliens first win the game.

When thinking of board game publishers, Out of the Box may not immediately come to your mind. Despite not being the most well known board game publisher, Out of the Box has made quite a few games over the years with Apples to Apples likely being their biggest hit. In addition to Apples to Apples we at Geeky Hobbies have looked at 10 Days in Africa, 10 Days in the USA, Backseat Drawing, Blink, Cineplexity, Easy Come Easy Go, My Word!, and Snorta. While most of Out of the Box’s games aren’t fantastic, for the most part they are usually very solid party games.

Shake ‘N Take is an interesting idea for a board game. Basically the game is a mixture of a pattern recognition game mixed with a dice rolling game, and a speed/quick reaction game. While I am not a huge fan of pattern recognition and dice games, I was interested in the speed element of the game since I really like these type of games. For the most part the speed element of the game works pretty well. If you hate or are terrible at speed games, Shake ‘N Take is not going to be for you.

While I liked the speed element of the game, I actually think the game plays too quickly at times. Unless the player shaking the alien dice is having a lot of trouble rolling an alien face, you generally are only going to have seconds before you have to give up the shape die and the marker. Usually you can get one to three new aliens circled each round. There were plenty of times in the game where a player didn’t even have enough time to process the shape they had rolled before the player rolled the alien face which meant the player was unable to circle any aliens.

Basically the game comes down to how well a player rolls the alien die. If you are sitting next to a player that gets really lucky with the shaker egg you have no chance at winning the game. Meanwhile a player that is next to a player that can’t shake an alien head will get a bunch of time to circle aliens. At times this kind of feels unfair since your fate in the game is more dependent on the player to your right than your own actions.

Basically Shake ‘N Take is a decent party game. I had some fun playing the game and if someone asked me to play the game I wouldn’t have a problem playing it. I don’t really see it as a game that I would play often though. I would only play the game once or twice and I would then put it away for quite a while. Since I already own so many board games this means that I will likely be getting rid of Shake ‘N Take since I just don’t seeing myself playing the game often enough to keep it.

When I played the game I played it with three other adults which I don’t think is the ideal setting for the game. I see Shake ‘N Take as more of a family game since kids will likely enjoy it more than adults because I feel like I would tire of it pretty quickly. For kids I think Shake ‘N Take would work really well. The game is well designed for children since there are two sides to each game board with one side being a simpler side for younger children. I think Shake ‘N Take could work really well helping children learn their shapes.

I am actually interested in how well the game plays with larger groups. The game supports up to ten players. With the game being a party game I could see it working well with a large group. You have to applaud a party game that works with ten players without having to buy an extra version of the game or having to play in teams. While I think the game should play well with a lot of players, I would worry a little about how long players have to wait around doing nothing. While it is not bad in the four player game, I could see players waiting a while for their next turn in larger groups. The problem with Shake ‘N Take is that the game is fun while you are rolling one of the dice but it is pretty dull just sitting around waiting for your next turn to come around.

Overall Shake ‘N Take is not a bad game. I had some fun playing the game. It is easy to learn and quick to play. I just feel like the game works better as a family party game than an adult party game since I don’t see it as the type of game that you would play for long stretches of time since adults might tire of it pretty quickly. If you have children and the concept behind the game sounds interesting I think you will enjoy the game. Otherwise I think you might tire of the game quickly so I probably wouldn’t recommend Shake ‘N Take.