The object of the game is to get rid of all of your cards. In order to get rid of cards, players play cards onto the piles in the center of the table as quick as they can. Players all play at the same time and do not have to wait for the other players to play a card before playing additional cards. Cards can be played on a pile if the card matches one of the three characteristics of the card currently on the top of the pile which include: 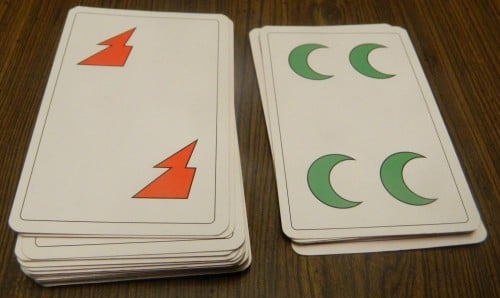 Whenever one player has played all of their cards (from their hand and draw pile), they win the game.

Blink is traditionally played with two players but there are additional rules for three or more players. With three players, three piles are created in the center of the table. Each player can play on the pile to their left and right but is unable to play on the other pile. With four or more players the game is played as a single-elimination tournament where two people compete at a time and the loser is eliminated from the game.

Looking at Blink’s box I barely gave the game a second thought. It didn’t look particularly original and looked too simple to be very good. The only reason I even picked up the game was that I found it really cheap at a thrift store. I am glad that I picked up Blink though since it was a pleasant surprise.

My first impressions about the game were correct. Blink is an extremely simple game. So simple that you could probably teach the game to a new player in less than a minute. The whole game boils down to finding and playing cards that match either the color, quantity or shape of the top card in one of the piles. Being so simple doesn’t lead to many opportunities for strategy and Blink ends up having next to no strategy.

Generally I don’t like very simple games that have no strategy but I really enjoyed playing Blink. I think most of the fun comes from the game’s pace. Games generally take around a minute to finish and there is essentially no downtime once the game starts. The game’s box claims that it is the world’s fastest game and I can believe that. While playing Blink you don’t have time to think. You just try to play cards as fast as you can following the game’s few rules of course. Most of the game’s enjoyment comes out of this need to try and play cards as fast as you can in order to beat the other players. The game can become pretty cutthroat especially if the players are really competitive. Blink is one of the best quick play games that I have played. If you don’t really like these fast paced games though, Blink will not be for you.

The one issue with the game’s speed is that it becomes a nuisance trying to refill your hand. You need to spend most of your time focused on the cards in the middle of the table so you can play your card before your opponent(s) can play their next card. Since you are so focused on the piles you tend to forget about your hand. While playing I regularly ran out of cards in my hand.  You can keep up to three cards in your hand but they go away quickly when you play multiple cards in a row. Your ability to fill up your hand is actually a determining factor in whether you end up winning the game. At times the cards can be hard to pick up from the table. If you struggle to fill up your hand quickly you will waste precious time that could have been used to play cards to the piles.  I personally think the game should have given you a hand size of five in order to reduce the time wasted picking up card from your draw pile.

While the game can get very competitive, I think it could also be used as a good teaching tool for younger children. The game has a recommended age of 7+ but I think that is a little high. If a kid is old enough to be able to recognize the different colors, shapes and number of objects displayed I think they would be able to play the game. I think the game could be a good learning experience by teaching colors, shapes, and numbers (1-5).

Another thing I like about Blink is that you can pretty easily come up with your own house rules. I usually play the game with two other players. While the provided rules for a three player game are completely serviceable, our group decided to tweak the rules. We ended up using only one pile and added a rule where a player could not play two cards to the pile at a time. Once a player played a card they had to wait for another player to play a card. Our group prefers these rules over the original rules.

Blink’s short length makes it a great filler game but it also leads to some issues. The game seems like it ends as soon as it begins. You usually end up spending as much time shuffling and dealing out the cards as you do playing the game. The constant shuffling kills the mood since you go from a frantic game to everyone sitting around waiting for someone to shuffle. The game comes with 60 cards but that is enough for the game. Since I hate waiting around for the cards to be shuffled I have picking up additional decks of cards when I find them for cheap. With more decks you can focus on the game instead of shuffling the cards.

[…] have played quite a few free for all/quick reaction card games. In particular we have reviewed Blink and Ratuki. While there are a lot of games in this genre, I enjoy the games because of the quick […]