To be the first player to reach the finish line and complete the final challenge.

Place all of the dice into their corresponding spaces in the trays to make them easier to find during the game. Each player picks their pawn and places it on the start space. Separate the cards by topic and shuffle each set of cards. Each player takes a pencil and a piece of paper. The youngest player gets to start the game.

To start a player’s turn they draw the top card from the pile that corresponds to the section of the game board that their piece is currently in. For example if your pawn is in the “Actionland” section of the board, you would draw an “Actionland” card. 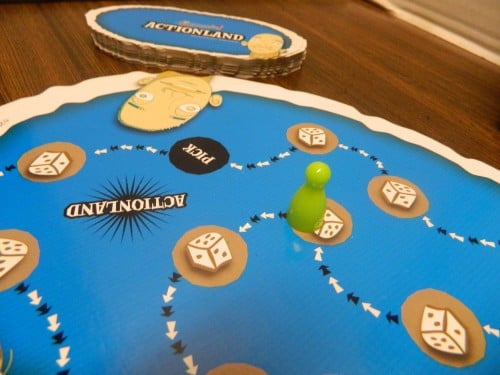 The green player is currently in the Actionland section of the game board. On their next turn they draw the top Actionland card and do whatever the card says.

If a player’s piece is on a “Pick” space the player gets to pick which challenge they would like to complete. 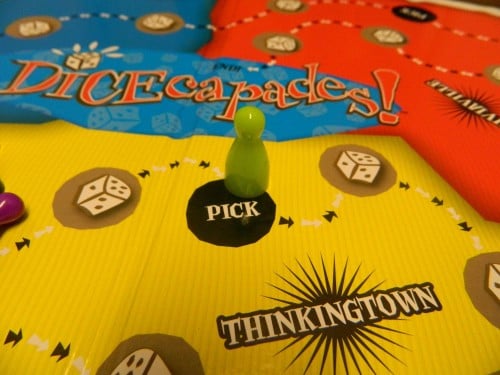 When a player reaches the final space they will be presented with their final challenge (even if it is not currently their turn). The player to the left of the player who finished gets to pick the top card from one of the three types of challenges. If the player successfully completes the challenge they win the game. If they fail the challenge they will be presented with another “Final Challenge” on their next turn. The first player to complete their final challenge wins the game. 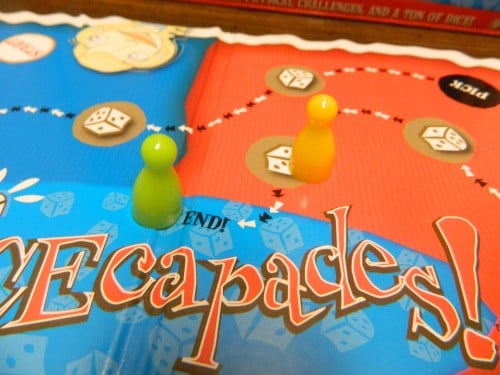 The first thing you will notice when you see Dicecapades are all of the dice that come with the game. The game actually comes with over 130 dice of various shapes, sizes and types. With over 130 dice I wonder if there has ever been a game that features more dice than Dicecapades does. Since I found Dicecapades for cheap at a thrift store I decided to pick it up seeing as the worst thing that could happen is that I just bought a bunch of dice that I could use for other games.

Looking at the “how to play” section you will quickly notice how simple Dicecapades is. The instructions included with the game take up one sheet of paper but you can easily explain the entire game in a couple paragraphs. You pretty much just take a card and do what the card says. That is pretty much all there is to the game. If you are looking for a quick party game that you can jump into quickly with very little rules explanation, Dicecapades will be it. In just a couple minutes everyone will know what they are doing in the game.

So the first time I played Dicecapades I enjoyed it more than I was expecting. What I liked about the game was that some of the challenges are pretty fun and interesting. For example some of the challenges involve stacking the different sized/shaped dice on top of one another. This was a lot more challenging than you would expect and it was pretty fun. Dicecapades has some other fun challenges that utilize the many different types of dice that the game includes which shows the potential that Dicecapades had.

Towards the end of the first game though I started to sense some problems with the game. These problems became even more apparent the second time I played the game.While the game has some interesting challenges and has potential it fails to live up to that potential because too many of the cards are just different variations of the exact same card. About half of the Actionland cards seem like they were taken straight from a game of Pictionary since all you do is roll a die to determine what object you have to draw. The Triviatown cards are just typical trivia cards that just use a die to determine which question is asked. The game has over 130 dice and it feels like barely any of them are actually used in the game. There are so many dice included with the game that I don’t know how the creators couldn’t have come up with more interesting things to do with them.

In addition to the lack of originality in the challenges is the fact that there are so few cards in the game. The game only comes with 100 cards so you will quickly start repeating cards.You will probably be able to play two or three games before you start repeating cards. This means that Dicecapades doesn’t have a lot of replay value unless you don’t mind using the same cards over and over again.

Another issue I have with the cards is the significant difference in difficulty between the cards. Some cards will be really easy while others can be really hard. This shows itself most in the “Pictionary” and trivia cards. One trivia question will be really easy while another is really hard. Maybe it is just me but I think it is kind of hard to draw the word “draw”. In addition some cards are free for all cards where all of the players have the same odds of winning the spaces from the card. It is not really fair for one player to draw a card that could give spaces to any player while another player draws a card where only they can gain spaces.

Overall Dicecapades is not a terrible game. It has some flashes of being really good but it get repetitive too quickly and wastes an opportunity to take advantage of all of the dice that come with the game. Having so many dice though, if you end up playing the game and not liking it that much you can always use the dice that are included with the game for other games that require dice. If you find the game for really cheap and are looking for dice you can’t go wrong with picking up Dicecapades for the dice alone.

Dicecapades is a game of wasted opportunity. Dicecapades is an interesting game since it utilizes over 130 dice. With that many dice you would think that the game would have come up with some interesting challenges that utilized them. While some of the challenges are pretty interesting, there just isn’t enough challenges and too many of them are just variations of one another. Dicecapades is still a decent party game and you can enjoy a couple of games before you tire of it but it doesn’t have a lot of lasting power.