“Snorta!” is a 2004 game from Out of the Box Publishing (a board game publisher from my home state of Wisconsin that is mainly known for “Apples to Apples” and Alan Moon’s “10 Days” series) that works well as both a party game and a family game that most young children should be able to play. The goal of the game is simply to be the first to play all of the cards in your hand.

The game starts with set up where each player is given a barn and told to draw a random animal figure out of a grab bag. Each player must keep their animal figure visible so that the other players can memorize who has what animal. Each player then puts their animal into their barn, which will hide it from view when the game starts. One player becomes the dealer, shuffles the 97 cards together (8 cards for each of the 12 animals in the game and one swap card which I’ll describe later), and deals all of the cards in even amounts to each player. If you are only playing with 4 players, you are supposed to remove two sets of animal cards and one set should be removed for 5-6 player games (use all 12 animals if you have 7 or 8 players). 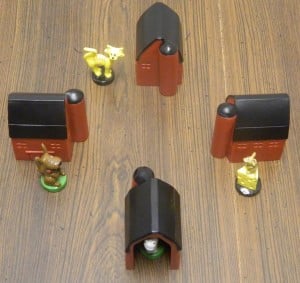 The four players in this game of Snorta! have selected their animals and are currently showing them to their opponents. When everybody is ready, they will all place their animals inside their barn like the player on the bottom already has.

After set up, play begins. Each player picks up the cards they were dealt and holds them face down in one hand. Starting with the dealer and continuing clockwise, each player flips over the top card in their hand and places it on the table (if you already have a card on the table, you put the new card on top of it creating a stack). Play continues until a card is played that matches one of the cards on the top of another player’s stack. When there is a match on the table, players stop playing cards and the two players with the matching cards must race to make the sound of the other player’s hidden animal in their barn (not the sound of the matching animal cards or the animal in their own barn). 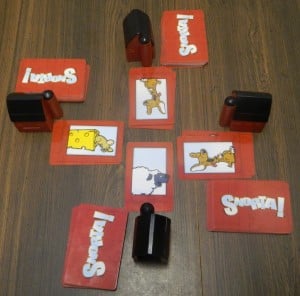 For example, player A matches player C’s sheep card already on the table. Player A has a cow in their barn while player C has a pig. Player A needs to say “oink” before player C says “moo.” The first of the two players to make the correct sound wins the match and gives all of their cards on the table to the player who lost the match (they then add them to the bottom of their hand face down). There is no penalty for making the wrong sound and you are allowed multiple guesses to try to match your opponent. The other players not involved in the match are not allowed to make any noises at all. 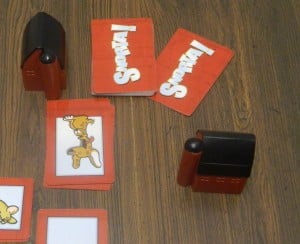 After each match is determined, players start laying down cards again starting with the player to the left of the last person to play a card (before the match was made). The first player to get rid of all of their cards wins “Snorta!” regardless of how many cards they have on the table.

There is one swap card in the deck which just adds a little variation to the game. The player who flips over the swap card replaces the animal hidden in their barn with a new one from the grab bag, shows their new animal to all players, and places it in their barn. This card is only in the game to try to mess up your memory a bit.

Players can control the speed of the game by how fast they play their cards. You can take as long or as little time as you want to play your cards. The faster the cards are played, the wilder the game gets since it becomes harder to keep up with the pace and keep an eye on matches while also remembering what animal each player has in their barn. Once play begins, players are not required to reveal their animal again even if another player asks (though they can if they want to be nice).

It has never happened in the games I’ve played, but if a match on the table is missed and a third matching card is played, only the first two players with the same card are allowed to try to make the sound of their opponent’s animal. Finally, if a player plays their final card and it matches an animal on the table, they must win that match in order to secure the win.

“Snorta!” is a very simple party game that is good for families as well. While you can play the game with just four players, it is much better with at least six players and ideally the full eight that the game can accommodate. With just four players, it is very easy to remember your opponents’ animals in their barns (since you only have to remember three instead of possibly up to seven different animals). If you have only four players, while you will temporarily forget someone’s animal from time to time (or have a brain fart and make the wrong noise), it just doesn’t happen enough. Part of the fun of “Snorta!” is seeing players have to wildly guess animal noises when nobody can remember their opponent’s animal. It’s one of those silly games that’s good for some laughs.

In addition, with only four players there aren’t a lot of matches in a typical game. Since you only have three cards that you could possibly match, you will probably have to lay down at least 3-4 (often times even more) cards before you finally get a match. This means a lot of flipping over cards and not a lot of matching. It also means that the penalty for losing a match can be very significant. Instead of just adding a couple cards to your hand, if you lose a match during a four player game you could be looking at 5-10 cards (or even more) which could very well take you out of the game (making the game much less competitive as well). The games are quicker (due to less matches) but also much more boring and way too easy (how hard is it to remember three different animal noises?).

With a full eight players, there are seven different players’ animals to remember and seven opportunities to match with each flip of the card. There will probably be at least one or two matches every time around the table and it will be nearly impossible to remember which animal each player has. Also, the swap card will probably come up a lot more creating even more confusion as to who has what animal. That is a much funner game to play.

Since I rarely get to play with more than four players, I did come up with some “house rules” to try to make a four-player game more fun. The two main problems are the lack of animal sounds to have to remember and too few matches on the table. While this could be a very confusing way to play, two ways to counter those problems could be to give every player two animals to put in their barns (and requiring players to make the sounds both of their opponent’s animals make) and having two stacks to place cards on for each player (alternating each time you go around the table). You could even have a rule where if a player plays an animal card which matches the other one they have on their other stack, everybody attempts to make the noise of the animal in that player’s barn and the first player to do so can give them some of the cards out of their hand.

While “Snorta!” is a relatively simple game which was actually originally a card game from the 1950’s called “Menagerie” which you could play with decks of regular playing cards, the game does add a lot of value with it’s high quality components. First of all, while you could play the game with regular playing cards it’s a lot easier to see matches when you are looking at pictures of animals versus numbers on a playing card. The cards are high quality and don’t wear down unless you are really rough with them. John Kovalic did the card art for the Out of the Box version (the one with the red box) of the game and as usual, he did a great job. I have owned the newer Mattel version before (I buy and sell a lot of board games) and while the art is fine, I prefer the Out of the Box version.

“Snorta!” also comes with 12 very cute animal figures. While Out of the Box could have just swapped these out with animal tiles or something similar to save some money (since they aren’t used for much and are hidden out of sight for the majority of the game), they are adorable and add a nice touch to the game. The plastic barns are also nice and do a great job at hiding your animal from view.

“Snorta!” appears to be out of print at the time of this review. It was originally put out by Out of the Box in 2004 and re-released by Mattel in 2007 but it seems to have been out of print since then. Thankfully, it isn’t a particularly hard to find game yet, though that could change if it doesn’t get another printing soon and all the available copies get snatched up. You can still find used copies on Amazon and eBay for around $30 (just a bit more than the game’s retail price) and it’s a very common find at thrift stores and rummage sales (at least where I live). While $30+ is getting up there for a party game, I don’t think it’s a terrible deal if you really like party games and have a large group to play with. Obviously I’d rather pay thrift store price but I think the Amazon/eBay price is relatively fair (especially for an out of print game).

Even though there is absolutely no strategy to “Snorta!” and a lot of luck involved, if you have a large group to play with it’s quite a bit of fun to play. It’s not a game you’ll play every game night (it’s a game that could become boring very quickly) but it’s great as an appetizer game you play every couple months. It’s especially good for kids but even if you just play with other adults, if you like silly party games, “Snorta!” is probably for you. Out of the Box makes some very nice party games (especially “Apples to Apples”) and “Snorta!” is another good one for their resume.