All of the players divide into two teams. Before the first round begins each team selects a director (gives clues) and the artist (draws based on the clues given). In every future round the role of director and artist will rotate between players on each team. Players need to decide whether they are going to use the easy (yellow) or advanced (red) cards.

To begin each round the director from each team looks at the current round’s word. At the same time both director’s start describing what their artist is supposed to draw. While drawing the artist and other teammates (other than the director) can try to guess the item that they are trying to draw. Whichever team is first to correctly guess the word receives a point. Whichever team is first to seven points wins the game.

Directors are allowed to use the following while describing the item:

Directors cannot use the following (if any of these are used the other team automatically get the card): 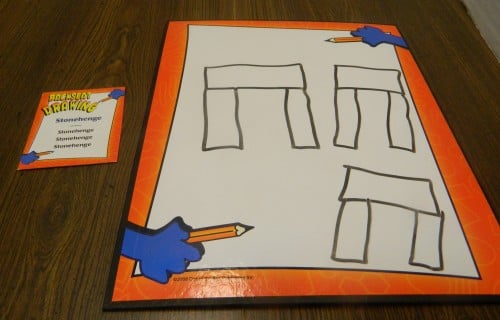 In the above example the current word is Stonehenge. An example of what the director could say in order to get the artist to draw the above picture could be as follows. “First draw two vertical rectangles that are parallel to one another. Next draw another rectangle horizontally on top of the two rectangles you just made. Next duplicate the shape you have drawn two more times.”

We here at Geeky Hobbies have played quite a few games made by Out of the Box (creators of Apples to Apples). At the time of this review we have reviewed: 10 Days in Africa, 10 Days in the USA, Cineplexity, Easy Come Easy Go, and Snorta! Overall Out of the Box is known for their very solid party/family games. Today we are going to look at Backseat Drawing which was created in 2008 by Out of the Box.

I might as well start with the obvious reference to Pictionary which is warranted since the two games are very similar. You get a word to draw and through your drawing (good or bad) your partners need to try and guess the word. Backseat Drawing only adds one caveat. In Backseat Drawing the “artist” does not know what the word is so they need to draw the item based on clues given to them by the director.

Both games play similarly but they both have a distinct feel to them. Due to players knowing what they are supposed to be drawing, Pictionary seems to rely more on your actual drawing ability. I haven’t played Pictionary in a while but from what I can remember the things that need to be drawn are not always easy to draw. If you are bad at drawing you probably are not going to be very good at Pictionary. Backseat Drawing on the other hand relies much more on a players ability to listen to the director’s clues and follow them correctly.

As far as difficulty is concerned, I would consider the game to be easy to moderately difficult. The game is simple to learn and play since the rules themselves are not that hard. The game can be explained in a couple minutes. The only difficult part about the rules themselves is deciding what clues are considered too closely related to the word that they become illegal. These situations occur somewhat regularly tand could lead to some arguments as players debate what should and shouldn’t count as illegal words.

Learning how to play the game is actually quite easy but some players may struggle with playing the game well. Being the director requires attention to detail and thinking outside of the box skills. In order to do a good job describing the object you need to develop a picture of the item in your mind and then break it down into simple shapes. You then need to describe those shapes in precise terms in order to avoid confusing the artist. If a player is not descriptive enough, a lot of things can go wrong quickly. Being the artist you are required to pay close attention to the clues that you are given. If you don’t listen carefully you probably will mess up which will waste time erasing your mistake and redrawing what the director originally told you to draw.

One of the bigger problems I had with the game is that the cards are very inconsistent with regards to difficulty. The game comes with two difficulty levels (represented by the colors of each side) and generally the yellow side is an easier word to describe. The words on the yellow side are usually really easy and are pretty much the family version of the game. The difficulty in the words on the red side of the cards can vary greatly. Some of the red words are quite easy, on par with the yellow words. On the other hand, some of the red cards are quite hard and I would find it hard for anyone to be able to describe the word using the basic shapes you are allowed to give as clues. With some of the words I think both teams will end up mutually agreeing to choosing a new card.

Another problem with the game comes from both teams playing at the same time. The problem with both players going at the same time is that it gets hard to concentrate on what your partner is saying. Both directors will be talking at the same time which means the artist needs to pay attention to their own teammate and tune out the other director. While the directors are describing the item, all of the players are guessing as well which can lead to quite a bit of confusion. Players that have trouble concentrating will struggle quite a bit with the game. This is one reason why I think the game should have just let each team take a turn. Each team would then get a time limit to guess the correct word.

Another reason why I think the game should have let each team go separately is because it is actually pretty easy to cheat in the game. If one director is having trouble describing the item they can piggyback off the other director by using their clues. In addition the guessing players can use the other team’s clues or their drawing in order to inform their own guess. This kind of mitigates the role of each team’s director since if the director is not good at describing the item the other players could just listen to the other director’s clues and draw based on their clues.

The game recommends playing with between four and eight players. Technically you could either play the game with two or three players but you will need to alter the rules. You can play the game with two players by removing the competitive nature of the game and just try to get your partner to guess correctly. For three players one player can be the clue giver while the other two draw and try to guess. I actually tried the game with three players and it somewhat works. The problem with playing the game this way is that the director cannot be particularly descriptive with regards to size or location since both players will draw the item differently so the clues might not apply to both of their pictures.

For the most part I played the game with four players which worked fine. I think six players is probably best though. With only four players the artist needs to worry about drawing and guessing at the same time. It is not that hard to do both but I think the game would be better with one player dedicated to guessing. The game can support eight but I think at that point the game is going to be too chaotic. Eight people could end up talking at the same time and it will become hard to understand what anyone is saying.

The components for Backseat Drawing are pretty much what you would expect. You get a dry erase board, markers, erasers, and a holder for the cards. There are 168 cards so the cards will last for a while but I don’t think the game will have a lot of replay value. Once you play through the cards I don’t see you wanting to come back to them. The cards are easy to read though and I thought it was a nice addition that all of the cards have the word written in four different languages. The game also comes with four different sets of instructions for the different languages.

The problem with the components and the game as a whole is that you don’t really need them. All you need to play the game is paper and a pencil. You can then either use Pictionary cards or come up with your own words to play the game with. The one good thing is that at least at the time of this review, Backseat Drawing is quite cheap which makes the price a little easier to justify.

Overall I found Backseat Drawing to be a very average game. It has a fun gimmick that should appeal to fans of drawing games. The game is easy to play but may require some time to adjust to the clue giving. Unfortunately the cards are quite inconsistent with regards to difficulty with some cards being way too easy while others are too hard. The biggest problem though is that you don’t really even need the game to get the experience. You could just as easily just use some paper and a pencil and come up with your own words.