The objective of the game is to acquire the most points/cards.

A game of My Word is played in as many rounds as there are players in the game. In each round one of the players will be the dealer. The dealer is in charge of flipping over cards but they can also score points during their round.

As the cards are being flipped over, all of the players are trying to form words with the letters on the cards. ? cards can be used as a wild letter and ?? can be used for two wild letters. When a player has found a word that uses at least three cards, they yell out the word and if the word is correct they take all of the cards used to spell the word. If a player yells out an incorrect word, all of the other players get to take one card from the table to add to their pile of cards. The round ends when all of the cards have been dealt out and no new words can be created. Players count up the cards in their pile and add that many points to their current point total. After each player has been the dealer for a round, the game ends. Whoever has the most points wins the game. 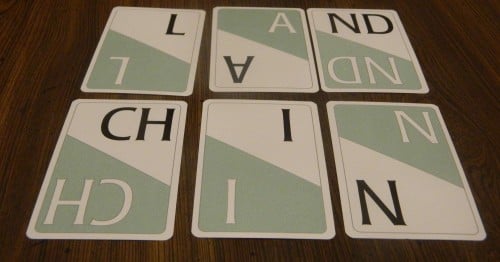 Players could use these cards to form the following words: land, chain, nail, and chin.

My Word has the following rules regarding which words are legal:

We at Geeky Hobbies have played quite a few games created by Reiner Knizia. Today we are going to look at another one of his games called My Word! My Word is Knizia’s take on the typical word card game. In the game you need to take the letters shown on the face up cards and try to form words to score points. While not a bad game, My Word is probably in the bottom half of Reiner Knizia’s games.

My Word is not a particularly hard game to play. The game probably takes a minute to learn and only a couple minutes to finish a round. Cards are flipped over and the players try to spell different words. As long as you have a decent vocabulary and know how to spell short words, you shouldn’t have trouble playing My Word.

Like most word games, My Word does not have a lot of strategy to it. Other than having a larger vocabulary or a quicker reaction time, there is no way to improve your odds of winning. The player with the largest vocabulary and quickest word recognition skills will have a distinct advantage in the game. Word recognition skills are particularly important since speed is the most important factor in the game. You might be able to come up with long words that use many cards but if one of your opponents comes up with a short three card word, they will take the cards before you can finish the word. Having a large vocabulary is helpful in coming up with words when no other players can think of something.  The only strategy in the game is to just blurt out a word as soon as you can come up with one that works with the letters provided.

While I like the quick speed element of the game, it does lead to a problem with word selection. Since the game rewards the first player to come up with a correct word, you are usually best off trying to find the shortest words that you can. By focusing on shorter words, you are more likely to answer quicker than the other players. You would think that it would be better to try to find longer words since you could then take more cards. It doesn’t really work out like that though. You can take some time coming up with a long word just to have someone sneak in and take the cards you need by providing a short valid word. Since all of the players are trying to find short quick words, most words in the game end up being between three and five letters long.

The only way to force players to come up with longer words is to force players to use at least four cards to form a word. I actually played a round like this and I have to say that it didn’t work as well as I would have hoped for. This house rule forces players to form longer words but it doesn’t work since there are too many scenarios where the cards showing won’t work together to form words. In My Word you need to decide whether you want to have shorter quick words or if you would like longer words with a lot more downtime between words.

As was highlighted by playing with the four card requirement, the game needed some work on the letter distribution. The game could have used some more cards. With more cards there could have been more vowels which would have helped the game tremendously. The game currently has too few vowels which leads to players having to wait for the next vowel card to pop up. Each vowel is really important so most players form words with them as soon as they are revealed. This makes it hard to form longer words. The game also wastes too many cards on letters/letter combinations that are not used very often.

The game’s components are solid overall. The card quality is what you would typically expect from this type of card game. The artwork is far from flashy but does a good job making the cards easy to read. The game could have done a better job distinguishing between the “M” and “W” card though. The two letters are hard to distinguish since there is no line or other indication that helps you determine which is which.

My Word! is a solid card game. The biggest problem with the game is that it is just not original. I have actually played a game that is very similar in Word Madness. There are probably several other card games that are very similar to My Word. Since the game is not particularly original, if you already own a similar card game I don’t see any reason to pick up My Word!

My Word! is a pretty typical card game. The game is technically sound. There are no issues with the rules and the game provides some quick fun. The game could have done a better job getting players to spell longer words but this doesn’t ruin the game. The biggest problem with the game is that it is just not that original. There are plenty of other similar games out in the market. If you already own one of these games, there is no reason to purchase My Word. If you don’t own a similar game though and you want a quick word game, you could do worse than My Word.