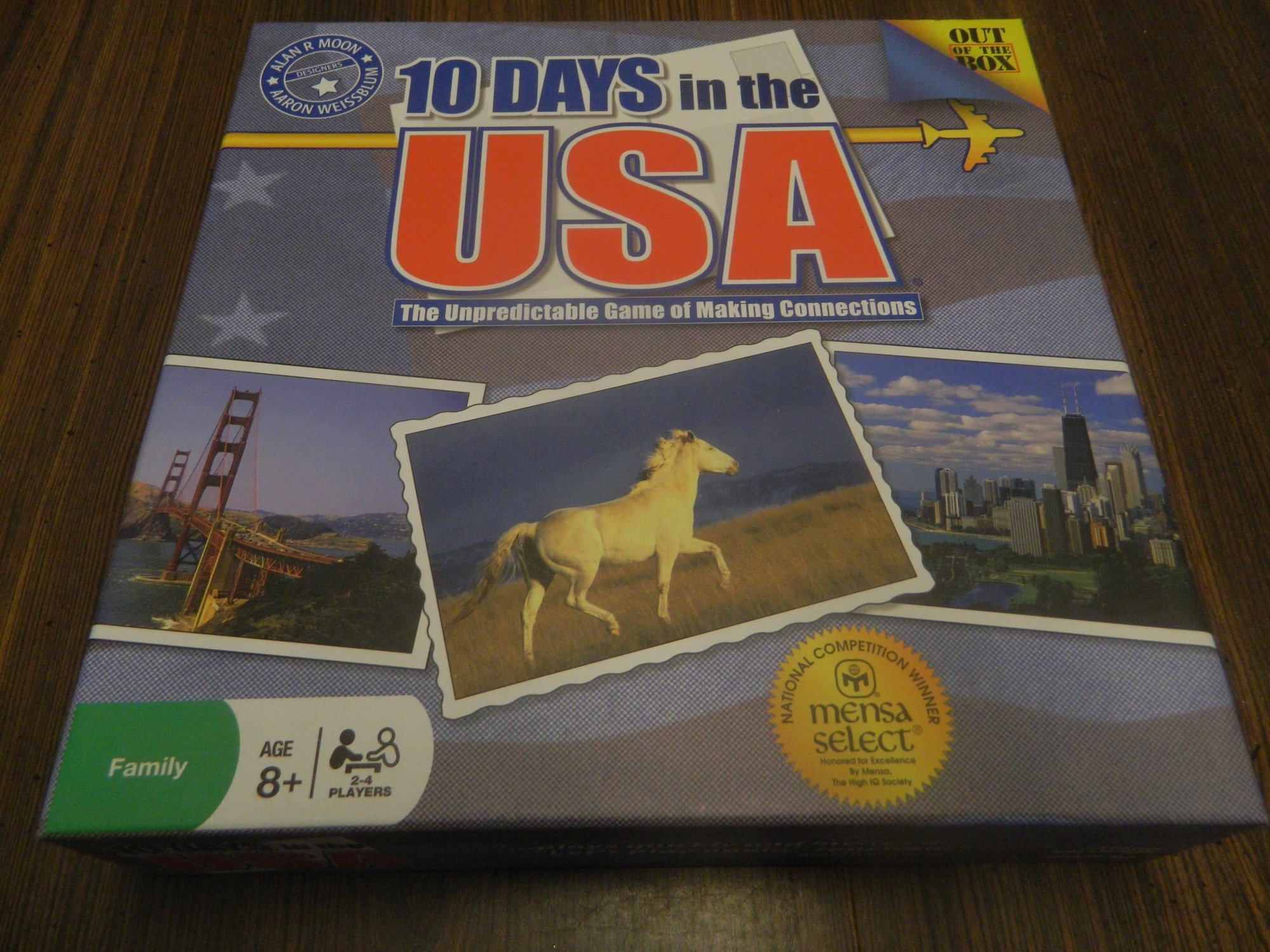 The goal in 10 Days in the USA is to plan out a 10 day trip through the United States. To begin the game each player grabs a Day 1-5 and a Day 6-10 tile holder. Players then grab 10 tiles randomly. After grabbing each tile they need to decide where on their journey they would like to place it. Once the tile has been placed it can’t be moved until later in the game.

On a player’s turn they can either draw a tile or swap two tiles.

During the game players can travel to different states by foot, car, or airplane.

Traveling by foot allows you to pass between any two neighboring states. For example you can travel from Wisconsin to Illinois or from Florida to Georgia. In this case two states that neighbor each other can be played in consecutive days on your travel racks.

If you have a car tile, you may travel through a state to reach your next destination state. For example if you wanted to travel from New York to Ohio you would need to have a New York tile, then a car tile, and then the Ohio tile.

When one player has completed a 10 day journey that follows the rules of travel by foot, car, and airplane they win the game.

When you first look at 10 Days in the USA you will probably think that it is an educational game. I do see the game being a great educational tool to teach children the names and locations of the various states. I don’t really see the game as being good as a first introduction to the states though. I think children should have some familiarity with the states or the game might become frustrating due to having to look all over the board for the state you are looking for.

What is good about 10 Days in the USA is that while the game could work well as a educational aid, the game is also fun to play. While reading the rules I was getting a little worried that the game wouldn’t be very good. It looked like there was very little strategy to the game and the winner would be determined by luck. While there is still quite a bit of luck involved in the game (more on that later), there was more strategy to the game than I was expecting. The game shares the travel theme from Ticket to Ride but it is also quite a bit different. 10 Days in the USA is a lighter/easier game than Ticket to Ride.

Strategy alone will not win the game but it helps. If you don’t plan out your route throughout the game you will not win. You need to plan several moves in advance in order to know which tiles you need and where you need to place them when/if you get them. You need a long term strategy in the game or you will constantly be changing your route and will make no progress towards completing your trip. Your long term strategy also needs a backup plan. By having a backup plan you are able to alter your strategy as the game progresses.

Unfortunately like any game that requires randomly picking tiles, luck has an impact on the outcome of the game. You can have the best strategy but you cannot win if you don’t get the right tiles. You can mitigate some of the luck by building alternate paths into your trip. You need to try and avoid being locked into needing one specific tile since it is unlikely that you will get the exact tile that you need. Instead of relying on one tile you should try to build your journey so multiple tiles can replace the tiles that currently don’t work. No matter how much mitigation you attempt though,  luck will come into play at some point in every game.

This luck of the draw also tends to lead to some stagnation in the game which is a minor annoyance. There will be at least one point in every game where no one can draw a tiles that they can use. You can go around the table several times with no one doing anything other than drawing a tile and discarding it right away. This problem doesn’t extend the game too long but it can be an annoyance at times.

Overall I would consider the contents to be pretty good. The gameboard is nice despite the fact that it’s only use is as a reference to where all of the different states are located. If you somehow lost the game board, any US Map could serve the same purpose. What I liked about the game board was that all of the states have a color that is different than all of their neighbor states. This was in part due to gameplay mechanics (airplanes) but I thought it did a good job making each state stand out which made the states on the east coast in particular easier to spot. The tile racks are made out of wood which is always nice. The tiles are made out of pretty thick cardboard and shouldn’t crease as long as you take decent care of them.

At the time of this review there are currently five games in the 10 Days series of games. What is unique about the 10 Days series is that if you own multiple versions of the series you can actually combine them and create 20 Days, 30 Days, 40 Days, or 50 Days. Here is a link to the additional rules from the official website for 10 Days. I currently own two games in the 10 Days series (check out my review of 10 Days in Africa) but I have yet to play the 20 Days variant. The variant does sound interesting and is something I would like to try at some point. My only concern with 20 Days, 30 Days, 40 Days, or 50 Days is that the game will probably be pretty long and you will need a huge table in order to fit all of the boards.

10 Days in Africa Board Game Review

3 thoughts on “10 Days in the USA Board Game Review”