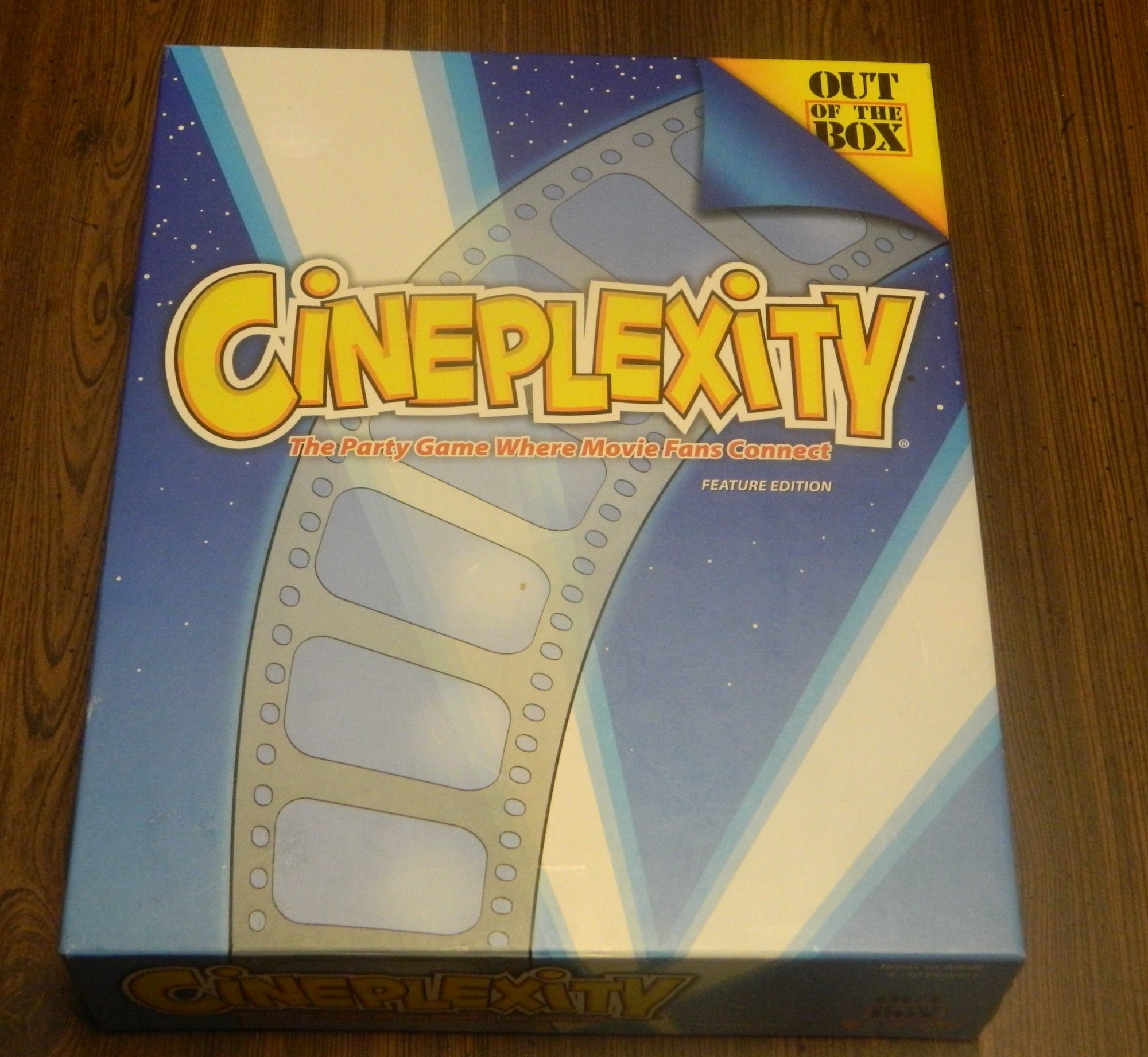 Board Games Party Reviews
October 16, 2014October 15, 2014 Adam Mortensen 0 Comments movie games, Out of the Box
How to Play | My Thoughts | Final Verdict | Comments

“Cineplexity” is a very simple party game for movie buffs from Out of the Box Games. The game can accommodate as many players as you have (the box says 4-10 but there aren’t any technical restrictions that would prevent more from playing). The game is very quick, flexible (you can play to as many points as you want or have time for), and extremely easy to play. Each turn, one player becomes the “director” and draws and places two cards which the other players will use to come up with a movie that fits both criteria. These cards can be scenes (for example, a “supernatural event”), props (items used in the movie), characters (“drunk or drugged” is an example), actors (two or three possibilities on each card), production (things like “title starts with T through Z” or “all animation”), setting (a certain city, the country, etc.), theme (a story element like “love at first sight”), or genre cards. There are also subjective critique cards (for example, “the book was better”), which the director has to decide whether or not the description fits the movie.

Once both cards are on the table, the other players race to call out the title of a movie that fits both criteria. For example, if the two cards are genre “mystery” and setting “mansion,” you could call out “Clue.” “Thriller” and “hotel” could be “Psycho.” When the director is satisfied with someone’s answer, they give them the first card placed which serves as a point. After the first turn, all subsequent directors only draw one card to go with the other one already on the table. If nobody can think of a movie that fits both criteria, a third card is played and players can use two of the three cards to form their answer. Play continues in the same manner until someone has earned enough points to win (the rules have guidelines but I’m sure you could play to whatever point total you want).

There are some restrictions to the answers you can call out. For example, the same movie title can win more than one point in the same game but not back-to-back rounds (if someone says “Star Wars,” you can’t use that for the next round as well). This is the same for sequels, you can’t use “The Lord of the Rings: The Fellowship of the Ring” and follow it with “The Lord of the Rings: The Two Towers” for the next round. Television shows, miniseries, and home movies are also not allowed (though it might be fun to play with them included). For subjective cards, the director’s opinion is the one that counts. There is actually a bit of a bluffing aspect to the game since it’s likely the director hasn’t watched all the same movies as you have. If you call out the name of a movie that they haven’t watched, you have to try to convince them to accept your answer. You could theoretically embellish things a bit to “steal” a card.

As a movie fan, I think “Cineplexity” is a pretty solid “appetizer” party game to start or finish off a board game or movie night. The gameplay is very simple (so simple that you could actually make the game yourself using just paper) but relatively fun. I thought the game would be really easy but a lot of the cards are much more specific than you would think. Some of the categories are pretty straightforward and help you focus your thinking to a certain genre or are very broad and can fit pretty much any movie. Others are obscure enough that it’s hard to think of a movie that fits it, and even harder to find one that fits the other card as well. The tough ones really force you to dig deep into your movie knowledge reservoir to come up with a title.

One of the best things about the game is that it is extremely flexible and can be a very quick game if you want it to be or as long as you’d like. The game gives a lot of guidelines but you don’t have to follow any of them if you don’t want to (and it won’t mess up the game at all). You can definitely play with more than 4-10 players if you want (though I would suggest playing for fewer points or the game could go quite long). You can pretty much decide how long you want the game to go by picking a small or large point total (or you could just set an amount of time to play for and drop the required win total completely). Kids can play but unless they’ve watched more than just the latest animated films, they probably won’t be very good at the game. The game’s flexibility makes it a perfect appetizer game for movie fans.

The only problem with “Cineplexity” is that I’m not sure it’s worth paying a lot of money for it when you could easily make your own version of the game. All you would have to do is come up with a bunch of genres, actors, props, etc. and write them on cards and you’re good to go (probably a 30-60 minute process). The game’s list price is $24.99 (though you can usually find used copies on Amazon for around $10 plus shipping) and while you get 315 relatively high quality cards and some trays, the cheapskate in me thinks it’s a better idea to make the game yourself and spend that money on a different game (I was lucky enough to find a copy in a thrift store for a dollar so I didn’t have to worry about it).

“Cineplexity” is a quick, simple, and flexible party game that should be a great appetizer game for all movie fans. If you love movies and party games, it is definitely worth a play. However, it is such a simple game that it would be easy to make your own version and save twenty dollars or more. Basically, “Cineplexity” is a good game that I wouldn’t hesitate to recommend except I’m not sure it’s worth the cost. If you don’t want to go through the hassle of making your own cards, then I would definitely recommend “Cineplexity.”