Be the first player to get their four designated spy assignment documents and make their way to the finish line.

Insert the batteries and place one of the pawns on the “test area” to make sure that the alarm is working properly. Shake the game board from side to side to randomize the locations that set off the alarm. Place the document cards in their proper slots around the game board. Shuffle the alarm cards and place them next to the game board. Each player randomly selects one of the assignment cards which tells them which cards they need to acquire during the game. 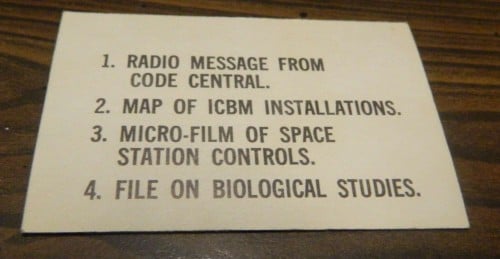 The player that drew this assignment card must collect these four documents before they can head for the exit.

Each player selects a playing piece and places it near the starting space. Players roll the dice to determine who gets to play first.

To start their turn a player rolls the dice. They get to move their piece the corresponding number of spaces. While moving a player can only move up, down, left and right. Players cannot move diagonally and they can’t move through walls indicated by thick black lines. When moving playing pieces the player has to lift the piece off the game board and press the piece down on every space that the player moves though. If you slide the pieces without lifting them up, the alarm system can get messed up and keep changing positions since the pieces will move the magnets that trigger the alarm. While moving players cannot move to the same space as another player and they can’t jump over another player. 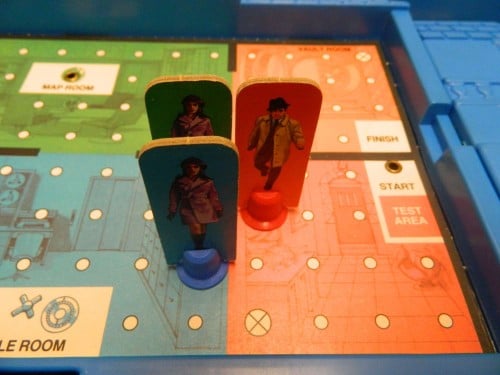 If the red player wants to enter the blue file room they will have to move around the two player pieces since they can’t move through them.

When a player lands on one of the white rectangular safe spaces (doesn’t have to be by exact count) the player searches through the corresponding cards for the card that they are trying to collect. Two players can be in a safe at the same time but a third player may not enter the safe until one of the players leave. 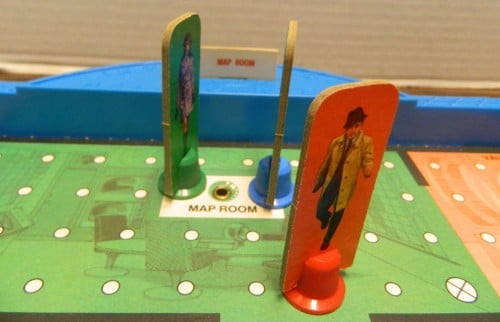 The blue and green players are in the safe for the map room. When they reached the safe they took their corresponding assignment document card from the map room. The red player will have to wait for one of the players to leave before they can enter the map room safe.

If while moving the player sets off the alarm, they stop moving immediately. They draw the top card from the alarm deck and do what the card says. If they have to give back a document card, they return any of their cards to the appropriate room. If the player has no document cards, they don’t lose a card. The player then moves to the room indicated on the card.

A player has set off the alarm system. The player draws the top alarm card. This alarm card tells the player to put back a secret document and then move their playing piece to the radio room.

Once a player collects their fourth card they need to head for the exit.

This player has acquired the four documents that they had to collect. They can now head for the exit.

The first player to reach the finish space by exact count with all four of their document cards, wins the game. 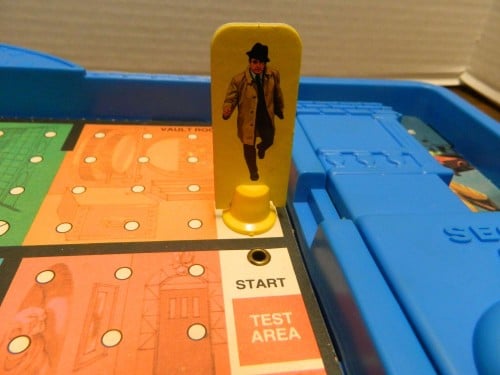 The yellow player has reached the finish line will all four of their required documents. They have won the game.

The unique mechanic for Super Spy was a hidden alarm system built into the game board. This mechanic uses magnets in the player pieces along with some other magnets/pieces of metal placed inside the game board. Every game the locations that set off the alarm are randomized so no two games play the same. When a player’s pawn moves over a space that contained one of the hidden alarm triggers, the magnet in the playing piece would attract the magnet/piece of metal which would then set off the alarm. While the mechanic seems kind of simple today, for a game from 1971 it was an interesting idea. Unfortunately it just doesn’t work right.

I will preface this by saying that the game is 44 years old at this point so some of the issues with the game board can probably be attributed to age. The copy of the game that I found is not in bad shape though for its’ age so I don’t think age is a big contributor to the problems I had with the game. The biggest problem with the game is that the mechanic doesn’t really work as intended. For some reason the alarm triggers don’t seem to want to stay in one place. All of the players were careful to pick up the playing pieces instead of sliding them and the triggers still seemed to move around the game board. I think the alarm bell ringing might end up moving the triggers around the game board. This really hurts the game since it is no longer a memory game where you have to remember where the traps are and is instead a game where you just need to get lucky and not pick a spot where the triggers moved to.

Super Spy just relies too much on luck to be fun. Luck determines everything in the game. If the triggers would stay in place there would be a small memory mechanic to the game but that wouldn’t even be that big of a mechanic since there is only one trigger in every room so it is quite easy to remember where the triggers are located (as long as they don’t move around the game board). You pretty much just roll the dice hoping for a high roll so you can move further in the building.

The first person to enter every room has to be the test subject for the room since they have a good chance of triggering the alarm which will tell all of the other players where the trigger is located. The players that go first have the disadvantage of being the first to enter a new room but the players who play last have the disadvantage of having a bunch of playing pieces in the way. At least to start the game the board is really cramped since everyone starts in the same place and all of the players have to head in the same direction. Since you can’t move through a space occupied by another player, players that move last have to waste so many moves just trying to move around the players in their way.

Some other quick notes:

If you are interested in purchasing Super Spy, you can purchase it on Amazon here

Yes, you are quite right, this game did not age well. Speaking as one who played it when it first came out, the alarms did stay in place originally. Although I was admittedly young at the time (about 10), the mechanic was quite refreshing compared to the static roll and move games available at the time, and we played it a lot. In later years I also tried to pick up copies from eBay and such and none of them worked quite right. It's a shame. An update with modern technology, though...