One of the first games that most children are introduced to is Tic-Tac-Toe. The classic game of getting three of your symbol in a row has been around for thousands of years. Throughout the years many people have tried to improve the Tic-Tac-Toe formula by adding additional squares/pieces or other mechanics to add more variety to the game. In the past we have looked at quite a few of these type of games including: 9-Way Tic Tac Toe, 5ive Straight, Brix, Flying Kiwis, Mark “Three”, Monster 4, Quixo, Sequence Dice, Shove Off, Tic-Tac Two, and Topple. Today I am looking at another game from this genre, Double Cross. Double Cross adds some interesting ideas to the typical Tic-Tac-Toe/Connect 4 genre but also relies on quite a bit of luck.

How to Play Double Cross

Each turn begins with all of the players (other than the double crosser) having an opportunity to move their red funnel to one of their other four spaces on the clear cross. The players can choose not to move their funnel if they choose. 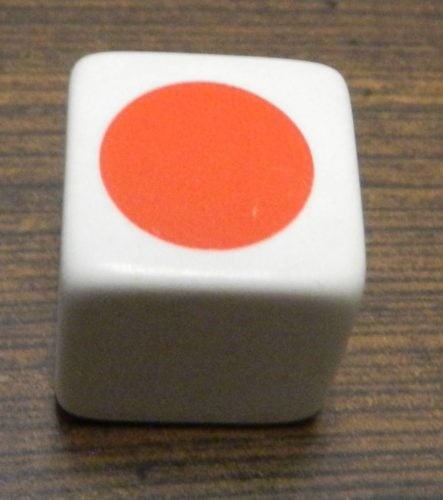 This player rolled red. They will be able to move the cross to one of the other red spaces. 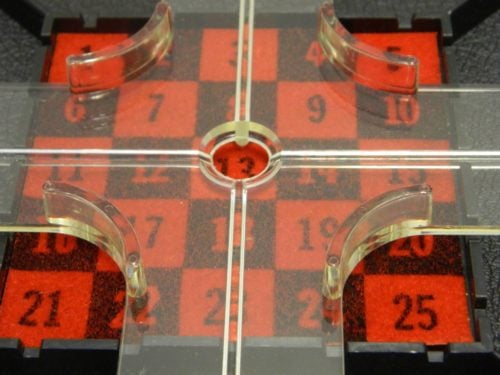 The player rolled red on the die. They can move the cross to any of the red spaces on the grid.

All of the players then look at the space that their red funnels are pointed to. If there is no marble in the space, they take one of the marbles from their tray and drop in into the funnel. 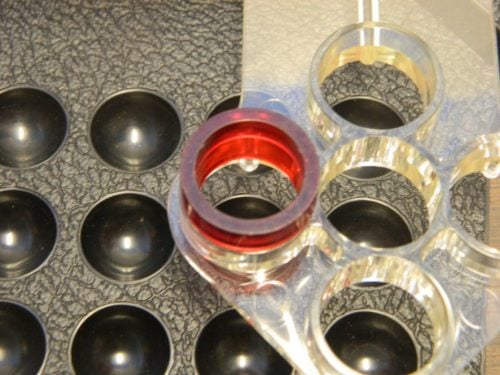 As this space is unoccupied, the player can add a marble to the game board.

If the space is already occupied, the player does not get to add a marble to their board this turn. 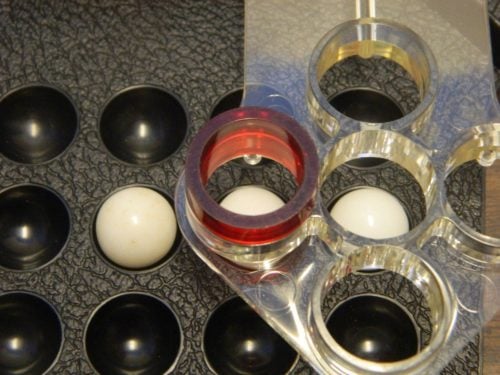 As there is a marble already in this space, this player will not be able to add another marble to their board this turn.

After everyone has added their marble, the next turn begins. The role of double crosser moves to the next player clockwise.

When a player gets five marbles in a row (horizontally, vertically, or diagonally), the game ends. The player who got five marbles in a row wins the game. If two or more players get five in a row on the same turn, the players share the win unless one of the winners was the double crosser in the previous turn. If one player was the double crosser, that player loses and the other player wins. 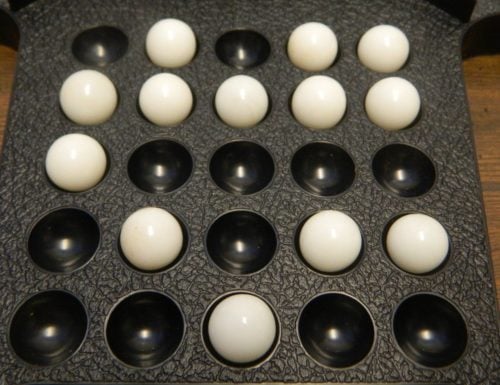 This player has gotten five marbles in a row so they have won the game.

My Thoughts on Double Cross

If I were to quickly describe Double Cross, I would say that it is similar to most other abstract games where you have to get a given number of your pieces in a row in order to win. Unlike these other games though, each player has their own board. No longer can you place your pieces to block the other players. Instead you use a cross placed above the gameboard in order to add pieces to the board. You roll the die and move the cross to a space based on what color you rolled. If the space that your funnel is on is still open, you get to add a marble to your board. All of the other players are able to do the same though. The first player to get five in a row wins the game.

Compared to most Connect 4 style games, I would say Double Cross might have a little more strategy. In most of these games you just decide where you would like to place a piece. This mostly involves placing a piece to get yourself closer to winning or preventing another player from winning. Things are a little different in Double Cross as everyone has their own board. While each move you make will help you, it could also help the other players. Thus before you move the cross on the game board, you need to analyze how it will affect you and the other players.

Analyzing your different options on any given turn can have a pretty big impact on the outcome of the game. Obvious your first priority is to find a space that is going to help you. As the only time you can directly impact your fate in the game is when you are the double crosser, you need to make each move count to get yourself closer to getting five in a row. After looking at beneficial moves for yourself, you should consider how the move will impact other players. If you are playing with four players, it is hard to make a move that won’t help out at least one of the other players. If possible though, you want to find a move that will minimize how much you help the other players. You probably want to look for a move where at least one player won’t be able to place a marble because their funnel is off the board or on a space that already has a marble. Choosing one of these spaces helps you out while not giving any benefit to the other player(s).

That might seem really obvious at first but things are not quite as straightforward. If you follow the rules as written, you are unable to move the cross to see how it will impact the other players or yourself before you make your choice. Therefore you have to work it out in your head how moving the cross to a space will impact all of the players. At first this might seem complicated but it is actually not that difficult to figure out how moving the cross will impact each player’s funnel. Just count up how many spaces in each direction you are moving the cross on the grid, and you can apply the same to each player’s board. This might seem like a hassle at first, but it will help you avoid making a move that could really help out one of the other players.

While Double Cross adds an additional mechanic to these type of games, I wouldn’t really consider it to be any more difficult than these other games. Double Cross doesn’t actually have a recommended age but I would say that kids around ages 8-10 should have no trouble playing the game. The rules are straightforward as you just roll the die, move the cross to a different spot, and then add a marble to your board. Younger children might not understand all of the strategy behind the game, but they shouldn’t have any trouble playing the game. With the game being so straightforward, I can see it being a game that you could play with people that don’t play a lot of board games. Most games of Double Cross play pretty quickly as you should be able to finish most games within 15-20 minutes.

Double Cross is far from the best board game that I have ever played but it is a very solid game. I had some fun playing the game. It is one of those games that I wouldn’t mind playing if someone else wanted to play it, but it is not something that I would otherwise regularly play. Like a lot of abstract strategy games though, Double Cross is a little dull at times. Double Cross is one of those games where you make a move on your turn, and then wait around until it is your next turn. Generally the game moves at a pretty quick pace, but there are opportunities for analysis paralysis. If a player has to always make the optimal move, the game is going to drag on while the player analyzes every potential option. You are probably going to want to institute some sort of time limit in order to keep the game moving while preventing analysis paralysis.

The most obvious area where luck impacts the game is the roll of the die. The only time you have much control over your fate in the game is when you are the double crosser. Therefore you need to make each opportunity count. The die used in the game features two black sides, two red sides, and two white sides. For your preferred strategy there is probably going to be a color that you would prefer to roll. If you roll that color you can move the cross to a space that lets you add a marble to whichever space you prefer. Once you have four in a row, this is pretty much the only way you are going to win the game as no one will allow you to get five in a row on their turn. If you roll red when you wanted black or vice versa, it is not as good but it still allows you to put another marble on your board. You definitely do not want to roll the white side though as you then don’t get to place any marbles. You are then stuck waiting for the other players to complete their turns hoping they will move the cross to an area where you get an opportunity to place a marble.

The component quality for Double Cross is nothing special. The game board and cross are made of pretty durable plastic but they are pretty dull. The marbles are generic marbles. The die serves its purpose. I do commend the game for adding notches to the board and the cross. The notches make it easy to lock the cross into the desired space on the grid. Along with the funnels it is easy to figure out which space each player will get to play a marble to based on how the cross is moved.

Should You Buy Double Cross?

Double Cross is basically the definition of a solid but unspectacular abstract strategy game. You can have some fun playing the game but it is going to drag at times and is susceptible to analysis paralysis. Basically Double Cross is like your typical get x number of pieces in a row where everyone has their own board. As each move you make will benefit yourself along with some or all of the other players, you need to analyze each move to try to maximize your own benefit while minimizing the other players’ benefit. This adds some interesting strategic decisions to the game. The problem is that the game also relies on a lot of luck. Between rolling the right colors at the right times, to players getting help from the other players; your fate in the game doesn’t solely come down your own decisions.

If you would like to purchase Double Cross, you can find it online: eBay

Game of the Generals (AKA Salpakan) Review and Rules
Click here to cancel reply.