Games like Tic-Tac-Toe have been around for thousands of years. The concept of using a 3 x 3 grid with players taking turns claiming one of the spaces is one of the simplest games in existence. The game is still popular to this day because you can play it anywhere with basically anything. While it is really easy to play you can make an argument that Tic-Tac-Toe shouldn’t even be considered a game. The main problem with Tic-Tac-Toe is that it is a solved game as there is a strategy that can automatically win you the game or force a draw. With Tic-Tac-Toe being a solved game there have been quite a few variant games made that take the premise of Tic-Tac-Toe and try to add some additional features to eliminate this problem. We have looked at a couple of these games in the past including Tic-Tac Two. Today I am looking at 9-Way Tic-Tac-Toe which is basically Tic-Tac-Toe except that you are playing nine games of Tic-Tac-Toe at the same time and there is one other small tweak. 9-Way Tic-Tac-Toe actually does a good job changing up the Tic-Tac-Toe formula adding some needed strategy but still shares a lot of the problems of its predecessor.

The game begins with the first player adding one of the pieces to the board. The player can choose any piece and can place it anywhere on the board where it fits. Once a player removes their hand from a piece, the piece can’t be moved again. 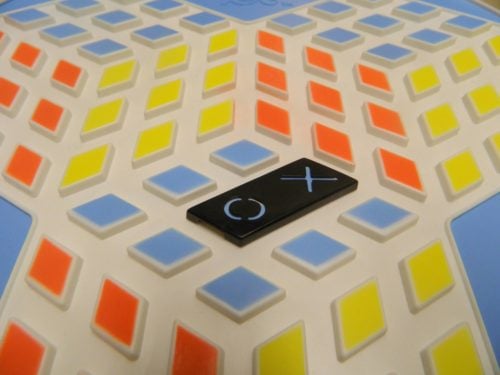 A player has placed a piece on the gameboard.

The other player will then place a piece. The players will alternate playing pieces until either the board is completely filled in or no more pieces can fit on the board. 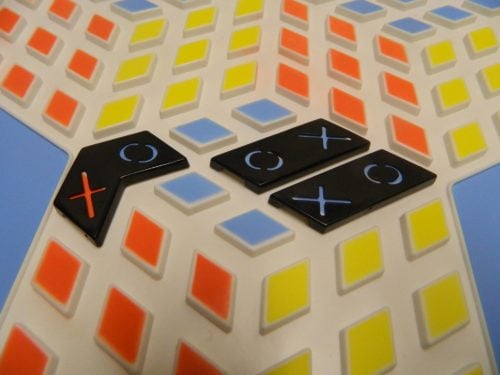 The o player has gotten three of their pieces in a row diagonally so they have scored a point.

The game ends when either the entire board has been filled in or no more pieces can fit on the board. Whichever player has scored the most points wins the game. If there is a tie, another game is played to break the tie. 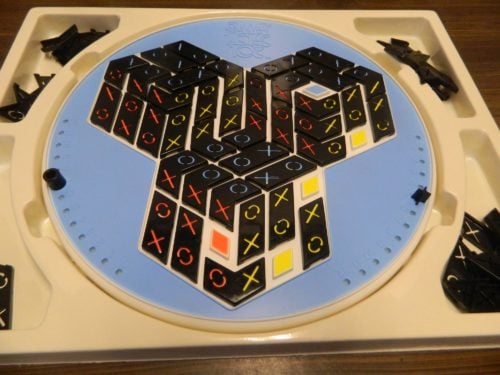 If the name of 9-Way Tic Tac Toe wasn’t already a giveaway, the game takes a lot of inspiration from Tic-Tac-Toe. The basic premise of the game is exactly the same. Get three x’s or o’s in a row. 9-Way Tic Tac Toe differs from normal Tic-Tac-Toe in two ways. First there is the fact that you are playing nine games of Tic-Tac-Toe at the same time. Unlike normal Tic-Tac-Toe the game doesn’t end with one player winning or there being a draw. The goal of the game is to get as many sets of three in a row as possible. The other major difference is the fact that players use pieces that have both an o and a x. This means that every piece you place will help you and your opponent at the same time.

Of the two new additions to 9-Way Tic Tac Toe I want to talk about the pieces first. The idea of each piece having both an o and a x is probably the biggest change to Tic-Tac-Toe as it actually adds a decent amount of strategy to the game. Before placing any piece you need to carefully analyze how it is going to help you and your opponent. Playing a piece might help you score a point but that isn’t particularly helpful if it is going to also help the other player score a point. While this doesn’t add a significant amount of strategy to the game, it is still a welcome addition to Tic-Tac-Toe as it gives you something else that you have to think about before making a move. This is not as original as you would think though as other games have had included pieces that have both an o and x (Brix for example). While 9-Way Tic Tac Toe could possibly be solved by a computer, the double pieces pretty much makes it impossible for a human player to always play a perfect game unlike normal Tic-Tac-Toe.

I think the best thing about the two symbol pieces is the fact that it actually helps prevent the draw situation found in normal Tic-Tac-Toe. In a normal game of Tic-Tac-Toe two good players will always be able to block one another which will always lead to the game ending in a draw. While it is theoretically possible in 9-Way Tic Tac Toe as well, I wouldn’t bet on it. With two symbols being added to the board each turn I just don’t see there being a way that a player could prevent the other player from scoring any points. Instead of trying to create a draw, you try to force the other player into making moves where both of you score one point which means neither player gains an advantage.

Before playing 9-Way Tic Tac Toe I thought it was going to be just like normal Tic-Tac-Toe where every game would end in a draw. While I could see the game ending in a draw every so often, I don’t see the frequency being nearly as bad as the original game. If both players are equally skilled what is more likely to happen is one of the players scoring one more point than the other player. This is a good thing as games should for the most part be close unless one player is significantly better than the other player. The problem is that it kind of feels like the first player has a noticeable advantage as they can start the game by claiming one of the center spaces which gives them an advantage to start the game.

For most of the game the players will either block one another or make tradeoffs where both players score a point. This means that the key to getting ahead of the other player is to set up situations where you can score two or more times on one of the boards. This is the main reason why I think claiming the center space of each board is more important in 9-Way Tic Tac Toe than it is in the original game. The center spaces are so valuable because they are pretty much the only way you can score two or more points from one of the boards.

Now let’s talk about the nine different boards of 9-Way Tic Tac Toe. When I saw that all nine boards were connected to one another I thought it was gong to be a pain determining how many points a player scored. While it eliminates some potential strategy I think it was a good idea that the game only lets players score on each individual board. This makes it much easier to determine how many groups of three a player was able to get.

While each board is treated separately, the fact that they are all connected still impacts the gameplay. This comes into play as you are filling in the edges of one board as one of the symbols will likely move onto the next board. This adds some strategy to the game since if a player can’t score on one board they can use a piece that puts their symbol onto the next board to give them an advantage on a board where they can actually score. While this doesn’t drastically impact the game, it is a nice little addition that adds a little more strategy to the game.

Since it shares the same main mechanics of normal Tic-Tac-Toe it shouldn’t surprise you that 9-Way Tic Tac Toe is really easy to play. The game has a recommended age of 7+ but I think kids younger than seven shouldn’t have much trouble playing the game. Just like normal Tic-Tac-Toe you play pieces to the board hoping to get three of your symbols in a row. The only difference is that there are a few more things to consider before making a move but that doesn’t really make the game more difficult to play. With the game being so simple it is also not surprising that the game is quite quick. Unless players take forever to make their move I would guess that most games would only take 10-15 minutes to finish.

The problem with 9-Way Tic Tac Toe is that it has most of the same problems as the original game. If you don’t really care for Tic-Tac-Toe I don’t really see you liking 9-Way Tic Tac Toe either. There is a little more to the game than the original but you still are just taking turns choosing a space on the board. While it has more strategy than the original game, it is far from a strategic game. While you can occasionally get a move past the other player, the other player will usually block your moves preventing you from scoring. Most of the points in the game are going to come from trade off scenarios.

Before wrapping up 9-Way Tic Tac Toe’s components are pretty average. The gameboard is pretty sturdy and I like that each of the nine boards are colored differently making it easier to tell them apart. I also like that if you keep the board inside the storage tray it actually swivel pretty easily which makes it easy to see the whole board. As far as the pieces I like that the game comes with 64 pieces. This means you rarely will ever run out of a type of piece before the game ends. The problem with the pieces is that they feel kind of flimsy. If you are careful with the pieces this isn’t really a problem but I don’t think it would be that hard to break one of the pieces. Finally I think 9-Way Tic Tac Toe is larger than it needed to be. With how large the box is, if I was on the fence debating whether to keep the game I would have a hard time justifying how much room it takes up.

9-Way Tic Tac Toe was made to improve the “classic” game of Tic-Tac-Toe and for the most part it succeeds. While the game uses all of the same main mechanics of its predecessor, it adds two things that add a decent amount of strategy to the game. First as the name points out, the game uses nine interconnected boards. Instead of focusing on just one board you need to keep track of all of them. The game also uses pieces that have both an o and x symbol. Every time you add a piece to the board you are potentially helping yourself and your opponent. These two additions actually add a decent amount of strategy to Tic-Tac-Toe making 9-Way Tic Tac Toe a superior game. The problem is that it just shares too much in common with Tic-Tac-Toe. The game mostly boils down to taking turns placing pieces to score points while blocking your opponent.

If you don’t like Tic-Tac-Toe, 9-Way Tic Tac Toe is unlikely to change your mind. If you are looking for an improved Tic-Tac-Toe though it may be the game for you as it improves on the original in every way. If the game sounds interesting to you and you can get a good deal on it, I think it would be worth picking up 9-Way Tic Tac Toe.

If you would like to purchase 9-Way Tic Tac Toe you can find it online: Amazon