The object of Quixo is to get five of your symbols in a row (vertically, horizontally, or diagonally). Before playing place all of the blocks on the gameboard with a blank side facing upward. The players/teams decide who will use the “x” symbol and who will use the “o” symbol. 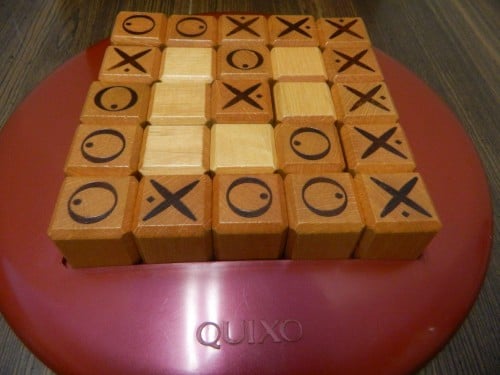 In the above scenario the “x” player would win for getting five in a row along the right edge.

A player’s turn begins with choosing a block on the outer ring of the gameboard (see below) and removing it from the gameboard. They can either choose a blank block or a block with their own symbol on it. A player may not remove a block showing the symbol of the other player. The player then needs to choose which direction they would like to move the blocks on the gameboard to fill in the space that the block was removed from. The block that was removed is then placed in the empty space in the gameboard with the current player’s symbol face up. 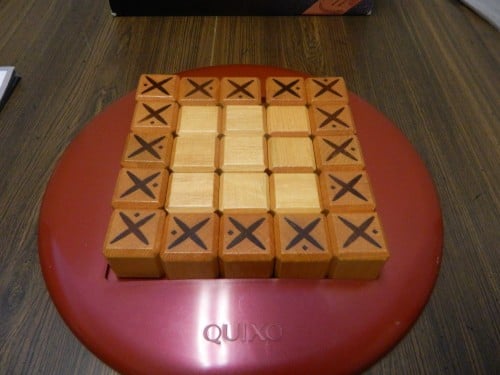 Players can only remove a cube from the outer ring of the gameboard which is shown by the “x” cubes in the above picture. 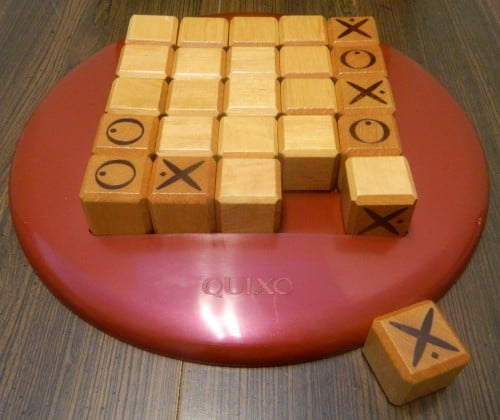 In the above picture the “x” player has removed a cube from the gameboard. The player then needs to decide how they will slide the cubes. They can slide the bottom row left or right, or they can slide the 2nd column from the right down. The “x” cube that was removed will then fill in the new empty space.

In the four player game the players separate into two teams sitting across from one another. The game plays the same as the two player game except that the teammates alternate taking turns. The blocks have an arrow on the “x” and “o” symbols. In the four player game, a player can only move a block with their symbol on it if the arrow is pointing towards them.

As I mentioned in my review of Tic-Tac Two, there have been quite a few variants created for Tic-Tac-Toe/Connect 4 over the years. Since both are  solved games, board game designers have tried to fix some of the issues with the games. Quixo is one of these Tic-Tac-Toe variants.  The problem with most of these variants is that while they fix some issues, they usually create their own issues in the process. While Quixo is not a perfect game, it is actually probably the best Tic-Tac-Toe variant that I have played.

So what makes Quixo a good Tic-Tac-Toe variant? Quixo fixes a lot of Tic-Tac-Toe’s issues and doesn’t really introduce many of its’ own problems. Quixo has solved the issue that most Tic-Tac-Toe games end in a draw. Quixo can’t end in a draw unless both players end up giving up (I will address this later). Also Quixo does not have one set in stone strategy that will either always let you win or tie. The board changes every turn so your strategy needs to adjust every turn as well.

One of the things I liked most about Quixo was that it was quick to pick up and play. The instructions are only two small pages long and take a couple minutes at max to read. The game can probably be taught in three minutes or less. The hardest part to teach is what directions the blocks can be pushed after a block is removed. New players may need a couple turns to fully understand what moves they can make. Quixo is the type of game that is easy to play but hard to master.

As far as strategy is concerned I think there are some things that will help you out but I couldn’t find a definite strategy that lead to victory. While playing the game I did find two things that seemed to help quite a bit.

First you want to always take a blank block if possible. Unless you need to use one of your own blocks to stop the other player from winning or to use it to win yourself, you should avoid using your own blocks. You want to take as many blank blocks as possible since they will help you in the late game. Once you switch a block to your symbol, you control it for the rest of the game. If you take one of the blocks already under your control you are giving your opponent an opportunity to gain a block advantage. In the late game you want to control as many blocks as you can since it gives you more opportunities to get five in a row.

There are probably plenty of other strategies that you can employ as well. This is actually one of the problems with Quixo. If you or your opponent suffer from analysis paralysis, Quixo could end up being a much longer experience than anticipated. Quixo is the type of game that you obviously need to put some thought into your move but you also don’t want to over think each move. Since there are so many possible moves that a player could make on a turn, a player could take forever going through all of them. If a player does this the game becomes boring pretty quickly. In order to enjoy the game the players need to limit how much time they spend on each turn.

While strategy is important to winning the game, I have a feeling that most games will be decided by a player making a mistake and not seeing a potential winning situation for the other player. Generally games take 10-15 minutes but if neither player makes mistakes the game could take a very long time. While you can’t draw in Quixo, it may seem like it since it is very hard to win without the other player messing up. In these situations players may want to just call a draw and end the game.

Quixo is an abstract game and thus will not appeal to everyone. The game has  absolutely no theme. The game relies on the player’s strategy and quick thinking skills. If you like abstract games, I think you will like Quixo. If you don’t like them though you won’t like Quixo.

When I played the game I played it with two players so I was unable to try the team rules. The team rules seem interesting. Playing the game in teams could be quite interesting especially if conversing about strategy with your partner is not allowed. The added rule about only one of the players being able to move cubes with their symbol on it is interesting. This rule will require players to further think out their moves. Without trying it I am unsure if this rule will add to the strategy or just complicate the game.

I really liked Quixo’s components. The game features 25 large wooden cubes. The game could have easily went with plastic cubes and saved some money but I am glad that they decided to go with the wooden pieces since I love wood board game pieces. The wooden pieces may develop scratches over time though since the copy I bought at a thrift store had some scratches. The plastic gameboard tray is also pretty nice. There is nothing special to it but it is made of a thick plastic that won’t be damaged unless it is poorly taken care of.

Overall Quixo is a very solid game. It is not spectacular but you can have fun playing the game. Quixo is a good variant game of Tic-Tac-Toe. The game is easy to learn and play but hard to master. The components are also quite good.

Thanks so much! I bought this at a thrift store and didn't know what game it was. Your instructions and tips helped a lot! ---Vinnie