Created as part of the Hi-Q collection, Shove Off was a board game published by Ideal in 1984. When you first look at Shove Off it looks like your typical “Connect 4” style game. Basically the object of Shove Off is to get four of your disks in a row vertically, horizontally or diagonally. The only unique thing about the game is the “shoving” mechanic. The shoving mechanic adds some interesting strategy to the game but it doesn’t overcome the fact that Shove Off feels like every other “get x number of pieces in a row to win” game.

How to Play Shove Off

Each player takes eight disks of the color they chose to play as. Fill the gameboard with the sixteen neutral disks. Choose a player to go first. 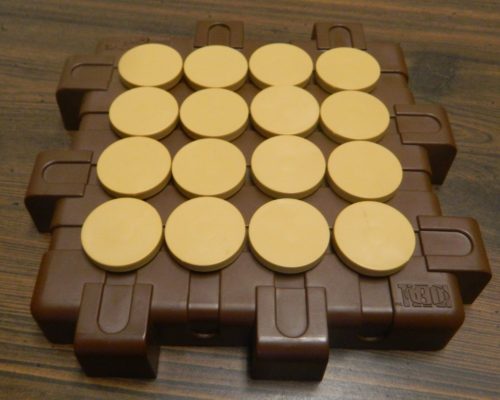 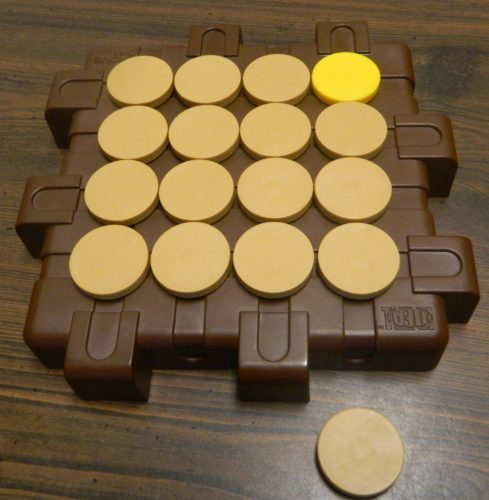 The yellow player has added a piece to the top of the board which pushed a neutral piece off the gameboard.

A player is unable to make a move that would push one of the other player’s pieces off the board. 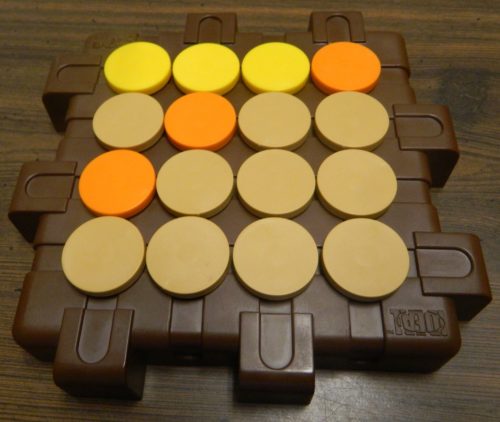 The yellow player would like to add a piece along the top row but they can’t because it would push off one of the orange pieces.

If a player ever runs out of pieces, they can use one of the neutral pieces for their turn.

A player wins the game if they are able to get four of their pieces in a row. 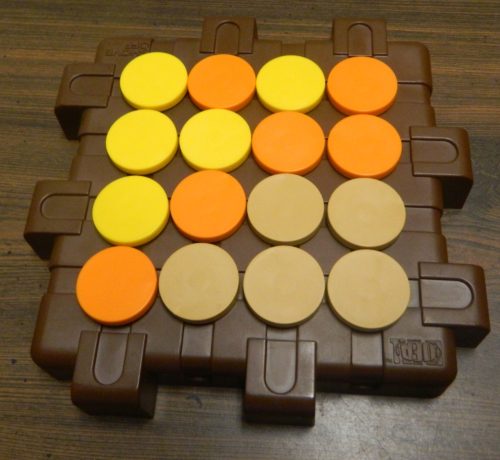 The orange player has won the game by getting four orange pieces in a row.

My Thoughts on Shove Off

The basic premise of Shove Off is going to be familiar to pretty much everyone. If you have ever played Tic-Tac-Toe, Connect Four or a similar game you know what to expect out of Shove Off. Basically you are trying to get four of your markers in a row. I wouldn’t really consider this an original mechanic since it has probably been used in hundreds of board games in the past. Since everyone has probably already played a board game that has used this mechanic, I don’t see the point in really talking about it.

Instead lets talk about the one unique mechanic in the game: the shoving mechanic. In Shove Off the players take turns adding one of their pieces to the gameboard. Since all of the spaces on the board are occupied, when you add your piece you will be pushing another piece off the board. The piece you shove off the board can either be one of the neutral pieces or one of your own pieces since you can’t push one of your opponent’s pieces off the board.

When you look at the shoving mechanic it looks pretty basic. The mechanic is really easy to understand but it also adds more strategy to the game than I was expecting. While both players could easily just play pieces without putting much thought into their moves, the key to being successful is thinking several moves in advance. If you are just thinking of one move at a time it will be hard to get four in a row and will also be hard to block the other player. Thinking several moves ahead allows you to set up situations where you can win in several different ways on a future turn. With the board changing after every move, you need to consider how your moves are going to affect the board or you could easily be backed into a corner.

At this point the strategy in Shove Off probably still sounds quite a bit like other games in this genre. Where the strategy in Shove Off differs though is in the fact that you can’t push the other player’s pieces off the board. At first this might seem a little strange but it makes perfect sense for the game. If the rule wasn’t in place the best move on any turn would likely be to just shove one of the other player’s pieces off the board thus giving them less options on the board. The better reason for this rule though is that it actually adds a blocker mechanic into the game. The potential moves that a player can make are actually impacted by what pieces are along the edges of the board.

In most of these types of “Connect Four” style games it is usually beneficial to control the center spaces of the board since it gives you more options to get four in a row. I am not so sure that the middle spaces are the best in Shove Off though. Having a lot of your pieces along the edges can be powerful since it can help limit what your opponent can do. Your opponent may want to add a piece to a given row but won’t be able to due to one of your pieces being at the end of that row. Since they can’t push your piece off the board they won’t be able to make the move.

Since the only new mechanic in Shove Off is the shoving mechanic, it shouldn’t come as a surprise that Shove Off is a quick game. The game only takes a minute or two to explain and only 5-10 minutes to play. Shove Off is not the type of game that you will play for long stretches but I could see it working pretty well as a filler game. Shove Off would work well as a game you bring along on vacation or with you when you have a little time to kill.

While Shove Off is a solid game, it can never really shake the feeling that it is just another Connect Four type game. While the shoving mechanic adds some things to the game, it doesn’t drastically change the formula. If you have played these type of games before, you know what you are getting with Shove Off. Shove Off is not a bad game but it is not revolutionary either. You aren’t getting much that you can’t get in another game. This feeling is the main reason why Shove Off can get repetitive pretty quickly.

Should You Buy Shove Off?

As a whole Shove Off is a solid but unspectacular board game. The basic mechanics of the game are similar to a lot of other “Connect Four” style games. Basically you want to get four of your pieces in a row. The one unique mechanic in Shove Off is the mechanic where you can shove pieces off the board while moving pieces around the board. This adds a decent amount of unexpected strategy to this genre of games. This mechanic doesn’t drastically change the game though so it still feels a lot like most of the other games in this genre.

If you are not really a fan of the “Connect Four” type of games, you probably won’t like Shove Off. If you are looking for an interesting twist on the genre though and can find it for cheap, it may be worth picking up Shove Off.

If you would like to purchase Shove Off you can find it online: Amazon