When I was young one of the board game genres I enjoyed most were dexterity games. I especially liked games which involved flinging objects with catapults/slingshots. While I would no longer consider dexterity games to be one of my favorite genres, it is hard not to have fun flinging objects with a catapult. This is one of the reasons I was interested in trying out Flying Kiwis. Flying Kiwis might not be a revolutionary game but it is a quick fun experience for the whole family.

How to Play Flying Kiwis

Using the normal rules all of the players play at the same time and can launch their kiwis as quickly or slowly as they want. Players place a kiwi on their catapult and launch it towards the gameboard. The objective is to get your kiwis to land in spaces where you can get four kiwis in a row or in a 2 x 2 square. 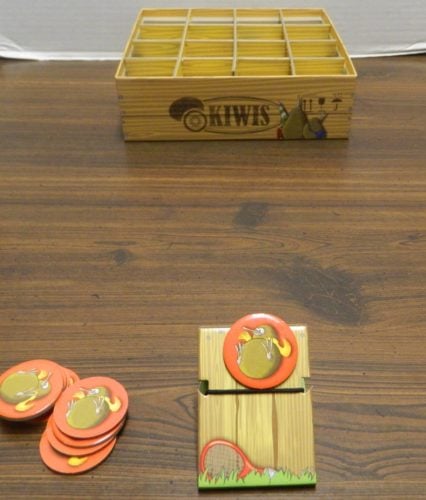 Other rules regarding launching the kiwis include:

A player automatically wins the game if one of two things happen:

A player gets four kiwis in a straight line. 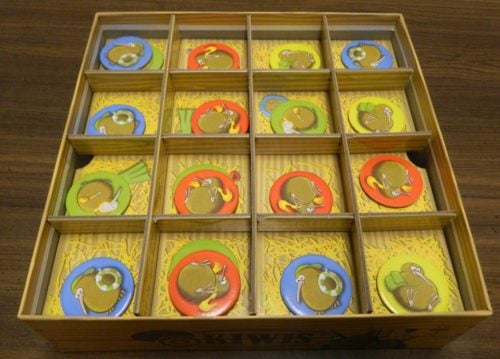 A player creates a 2 x 2 square with their kiwis. 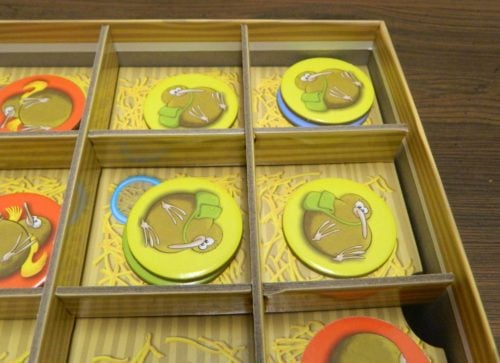 When a player achieves one of these options they yell out “flying kiwis”. If the player is correct the game ends immediately and they win the game.

If all of the players have launched their kiwis and no one was able to achieve a straight line or a square, the game is decided by scoring the kiwis. The player that has the top kiwi on each square will score one point for each kiwi that is in that square. Once all of the squares have been scored, the player with the most points wins the game. 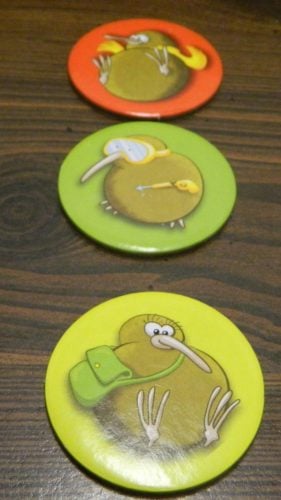 In one space there were these three discs with the red disc on the top. The red player will score three points.

Instead of having all of the players play at the same time, players can use the variant rule where players take turns shooting one kiwi at a time. When everyone has shot all of their kiwis, the players count up how many kiwis of each color are in each square. The player with the most kiwis in each square will score one point. If there is a tie, no one will score a point for that square. The player with the most points will win the game.

My Thoughts on Flying Kiwis

I think the easiest way to describe Flying Kiwis is take the game Connect Four/Tic-Tac-Toe and play it with a catapult. The goal of the game is to get four of your colored kiwis in a row or in a 2 x 2 square.Getting four kiwis in a row might not seem that difficult but it becomes a lot harder when you have to use the aforementioned catapult.

When you first look at Flying Kiwis most people will disregard it as a silly children’s game. The game is definitely silly as any game that has you launching kiwis onto a gameboard is going to be silly. I kind of disagree with game being considered a children’s game though. Obviously the game was originally designed for children and children will probably love playing it. I don’t agree with the children’s game label though because I can see plenty of adults enjoying the game as well.

Instead of being considered a children’s game, I think family game is a more appropriate label. Flying Kiwis is the type of game that can be enjoyed by people of all ages. Hardcore strategy gamers probably won’t care for the game but I think most adults can still enjoy the game even if they aren’t playing it with children. Basically if the premise of playing Connect Four with catapults sounds like fun, I would be surprised if you didn’t enjoy your time with Flying Kiwis.

Being a game gauged more towards families it shouldn’t be surprising that the game is quite short. The game has an estimated length of 10 minutes and I think that might even be a little generous. With the free for all rules I would estimate that most games would take closer to 3-5 minutes. With the variant rule of players taking turns I think most games should take closer to 5-7 minutes. While I kind of wish that the game was a little longer, the short length is beneficial for the game in a couple ways.

The first thing I liked about the game being so short is that it makes Flying Kiwis a great filler game. Flying Kiwis is not really the type of game that you are going to want to play for long stretches of time in one sitting. I would say the ideal playtime would be around 20-30 minutes. With how simple Flying Kiwis is I think the game might get a little repetitive after that point. With the games being so short you can easily play 5-10 games in a half hour and then move onto something else. Flying Kiwis plays great as a filler as you can play a couple games and then put it away for a different day.

The other reason why I like the short games is while there is skill involved in the game, there is still a pretty high reliance on luck. I think this mostly comes down to the catapults not being quite as accurate as you would like. The accuracy is fine but don’t expect the kiwis to fly with such accuracy that you can guarantee exactly where any disc is going to end up. The winner of most games is going to have to rely on a little luck going in their favor in order to win the game. The reliance on luck is not as big of an issue as you would expect though because this type of game should never be taken that seriously.  With how short the games are you can also quickly play another game if luck didn’t go your way in the last game.

While Flying Kiwis does rely on quite a bit of luck I have to admit that I was a little surprised by how much skill there is in the game. Flying Kiwis is the type of game where some people will be better at the game than other people. The more you play Flying Kiwis the better you will get at it. With more experience you can significantly increase the odds of one of your discs landing in the gameboard. Unless you play the game obsessively though I don’t anticipate any player being good enough at the game that they can aim for a spot and regularly land their disc in that spot. Usually the best a player is ever going to do is be able to regularly land a kiwi in a given portion of the gameboard.

I think this is one of the reasons why Flying Kiwis rarely ends with a player getting four in a row or a 2 x 2 square. We played quite a few games of Flying Kiwis and I can only remember one game ending with a player getting four in a row. I mostly attribute this to players not being accurate enough to regularly land a disc in the spot that they are aiming for. When you add in the fact that players can steal spaces from one another, very few games tend to end with one player getting enough kiwis in a row to win.

At first I would have thought this would have been a pretty big problem but the game does a good enough job having a backup if no one is able to get four in a row. If no one gets four in a row or a 2 x 2 square, players score points for controlling the most spaces on the gameboard. Generally this will reward the players that are the most accurate as they will get more discs onto the board. Usually the players that control the spaces that have multiple discs will win the game.

One potential problem with this scoring system though is the fact that in the free for all game the player who shoots the slowest will generally have an advantage in the game. While a player that shoots quicker has a chance to get four in a row before the other players can stop them, they also open themselves up to having the other players steal their spaces. If no one is taking the game that seriously this isn’t much of an issue as players will likely just shoot their kiwis at a normal pace. I can see a problem with competitive players though as they are going to want to wait as long as possible to shoot since it is probably going to be beneficial for them to do so. If there are multiple competitive players  this means that they will all try to wait out each other which could lead to none of the players wanting to shoot.

While the free for all mode is fun, this issue is one of the reasons why I think the alternative rule of players taking turns might be better than the free for all. With players being forced to take turns there is no more need to worry about players trying to stall for a competitive advantage. With players taking turns the game becomes more strategic in my opinion as players have more time to aim their shots. This mode is also quite a bit less chaotic as kiwis won’t be flying everywhere at the same time. If you like the premise behind the game but aren’t a fan of the chaos from these type of games, I think this alternative rule might be more enjoyable for you.

Before wrapping up I want to quickly talk about the game’s components. For the most part I thought the game’s component quality was quite good. The game mostly utilizes cardboard but it is thick enough that it should remain durable through many games. While the theme is pretty thin (typical of a children’s dexterity game), the game’s artwork is really nice. I somewhat criticized the accuracy of the catapults earlier in the review but for the most part I like them. I worry a little about the bands wearing down and eventually breaking but otherwise they are quite sturdy.

Should You Buy Flying Kiwis?

At first glance Flying Kiwis might look like a silly children’s game but there is more to the game beneath the surface. While the game was designed more for families with young children, Flying Kiwis is the type of game that everyone (except for maybe hardcore strategy gamers) can enjoy. It is just so satisfying launching the kiwis hoping to get them to land in one of the spaces. I was a little surprised by the skill involved in the game even though the game still relies quite a bit on luck with most games ending with no players being able to get four in a row. Flying Kiwis is a short game which makes it a great filler game that you play a couple games of before putting it away for another day.

If you would like to purchase Flying Kiwis you can find it online: Amazon