How to Play Mark “Three” Game

The first player inserts one of the discs into their guide and holds it in place while they aim the guide. When the player is ready to shoot they let go of the disc and lets it roll down the ramp. 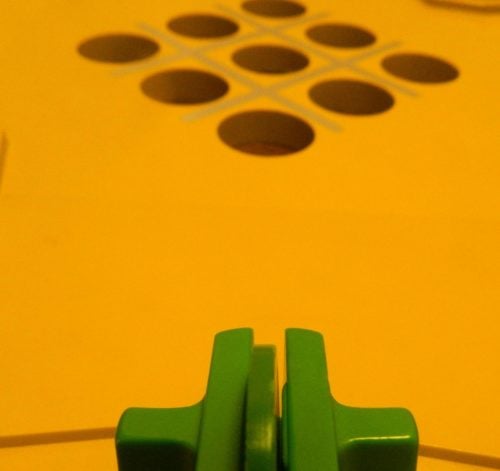 The green player is ready to shoot one of their discs.

If the chip lands flat into one of the holes, it stays in that hole. The top chip in each hole is the only chip that counts towards a player getting three chips in a row. 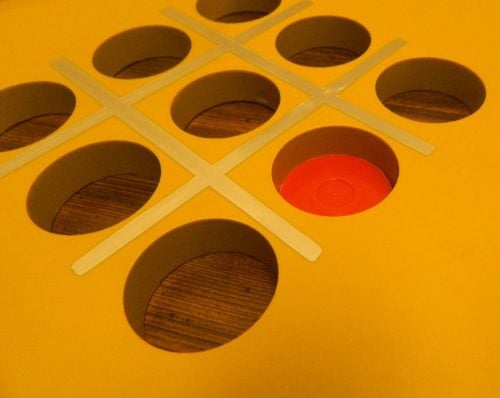 The red disc has fallen into the hole so the red player currently controls this space.

If a chip does not lie flat in a hole it is removed from the board and given back to the player. 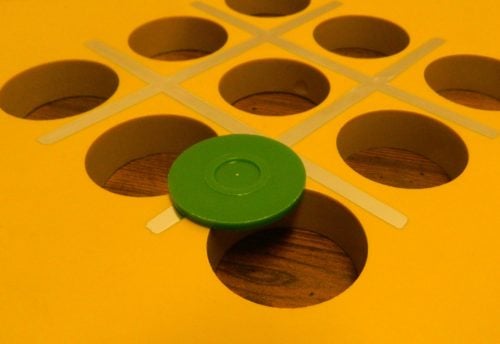 This disc has not fallen flat into one of the holes so it is removed from the gameboard.

The game can end in one of two ways:

If the next player to play has no discs left to shoot (they are all in holes on the gameboard) and no one has three discs in a row, the game ends in a draw.

If at any point in the game a player has three discs in a row (only counts discs on the top), the player automatically wins the game. 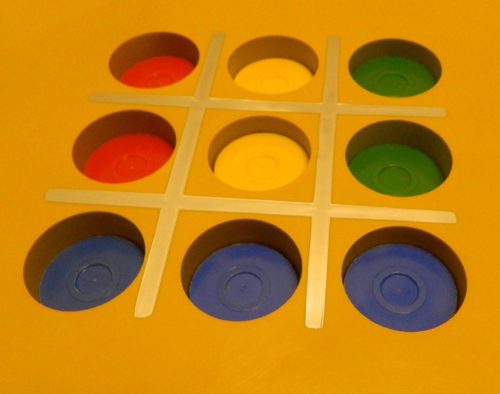 The blue player has three discs in a row so they have won the game.

My Thoughts on Mark “Three” Game

The Mark “Three” Game is a game that you can actually judge based on its’ cover. When I first saw the Mark “Three” Game I assumed it was Tic-Tac-Toe with an added dexterity mechanic. That is exactly what it is. Just like with Tic-Tac-Toe the goal of the game is to get three of your colored discs in a row vertically, horizontally or diagonally. Unlike Tic-Tac-Toe though it is not as easy as just choosing whichever space you want. Instead you have to aim the discs and roll them down a ramp.

Your enjoyment of the Mark “Three” Game is going to come down to your thoughts on the premise. If you don’t really care for the premise of Tic-Tac-Toe mixed with a dexterity mechanic, the Mark “Three” Game is not going to be for you. If the premise sounds interesting to you though I think you can have some fun with the game. The Mark “Three” Game is just one of those simple dexterity games that are just dumb fun. It is the type of game that you can turn off your mind while playing and just enjoy it for what it is instead of having to focus on the strategy. This is due to the fact that there really isn’t much strategy in the game since you just try to get three of your discs in a row while preventing the other players from doing the same.

Like a lot of these simple dexterity games though, the Mark “Three” Game can get repetitive pretty quickly. With the average game only taking around five minutes you can quickly get through quite a few games in a short amount of time. It is the type of game that is compelling enough that you will probably want to play a couple games in a row. Since the game is so simple though after a couple games it just feels like you are doing the same things over and over again. At the 20-30 minute point you are likely going to want to put the game away for another day. Now this is not necessarily a bad thing as you will probably want to come back to the game another day but I don’t see the Mark “Three” Game being something that you are going to want to play all of the time.

Before playing the game the one thing I was most concerned about was whether the discs were going to roll well on the gameboard. I thought the discs were going to regularly fall over right away and just slide towards the middle of the board. After playing the game I have to admit that the discs roll a lot better than I expected. Unless you don’t load the guide properly or you aim the disc to hit a wall, it is very likely that the disc will roll all of the way to the bottom of the gameboard. This is both a positive and a negative for the game.

The good news is that it is actually easier to aim than you would expect. The discs aren’t going to go exactly where you aim them but for the most part if you aim well you can get a disc to fall into the hole you want. This means that there is more skill in the game than I originally thought. If you aim well you can easily get all of your discs to fall into one of the holes.

This is where the problem comes into play though. While the game involves some skill, your fate almost depends as much on what the player to your left and right does than what you do. This comes from the fact that while it is easy to get discs in the holes directly in front of you, it is much harder to get them into holes on the other side of the board. It is hard to reach the other side of the board because it is really hard to get discs to roll past other holes without falling in them or being knocked off course. Therefore players are usually best off just aiming for the spots in front of them. This leads to problems where the players to your left and right are going to play a big role in how well you do. If they ignore you or miss when aiming for the spots you control it is going to be really easy to win the game. If the players continually go after the spaces you control though you are going to have a hard time winning. The player who sits between the two players who are worst at the game is going to have a very good chance of winning the game.

The fact that the players sitting next to you have a big impact on how well you do means that you basically have to either play the game with either two or four players. With three players the player who has someone on both sides of them will have a huge disadvantage in the game. With two players they can sit across from one another and neither player will have an advantage. With four players each player has the same opportunity to be messed with by their neighbors.

While the official rules has players taking turns I was kind of curious how the game would play as a real time game. Basically we tried playing the game where players could shoot their discs whenever they wanted. I was curious on how this would work since if it would work it could add some excitement to the game as the players raced to get three in a row. In execution though it doesn’t really work. It doesn’t work because the real time game is too chaotic. Discs fly everywhere and regularly hit one another. This leads to a lot of the spaces being blocked due to discs lying on top of the board. If there was a way to keep the discs from just sitting on top of the board I actually think this mode could actually be pretty fun. The problem is that you end up wasting so much time trying to clear discs from the gameboard.

When it comes to components the Mark “Three” Game is extremely bland but it serves it purpose. The game has to have one of the blandest boards that I have ever seen. Outside of the grid in the middle the gameboard is a single color and not a very enticing color at that. The guides and discs are pretty bland as well. What the game lacks in appearance it makes up for in durability. The gameboard is going to develop some scratches from the discs being rolled down it but I can’t imagine it not lasting for a long time. The board and box are quite large though which will turn off space conscious people.

Should You Buy Mark “Three” Game?

Basically with the Mark “Three” Game you get what you see. The game is basically Tic-Tac-Toe with a dexterity mechanic added in. You roll your discs down your ramp and hope to get three of them in a row before the other players. That is basically all there is to the game. Your enjoyment of the game is likely going to come down to what you think of the premise. If you like these type of games you can have some mindless fun with the Mark “Three” Game. Your fate is going to depend on the players sitting next to you but if you don’t put too much thought into it you can have fun. It is a game though that gets repetitive after awhile. I can only see playing it for 20-30 minute before putting it away for another day.

If you don’t really care for simple mindless dexterity game and the idea of mixing a dexterity game with Tic-Tac-Toe doesn’t sound that interesting to you, I don’t think the Mark “Three” Game is going to be for you. If the game sounds interesting to you though I can see you having some fun with the Mark “Three” Game. With it only being a game you will only play every so often though, I would probably only recommend picking it up if you can get a good deal on it.

If you would like to purchase Mark “Three” Game you can find it online: Amazon