Assemble the gameboard. Each player chooses a color and takes all four monsters of that color. The youngest player starts the game with play continuing in a clockwise manner.

On a player’s turn they roll the die and do the corresponding action based on what was rolled.

A player wins the game if they get four monsters in a row vertically, horizontally or diagonally. 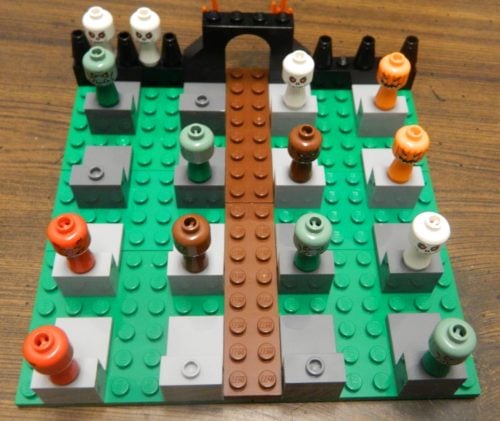 The green player has won the game by getting four pieces in a row diagonally.

Skeletons act as wilds and can help a player win. 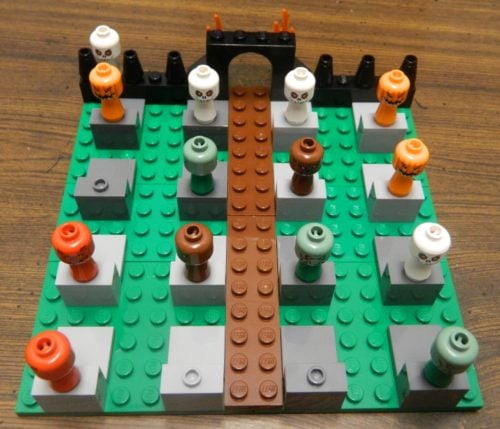 The orange player has won the game by connecting four pieces along the top of the board using two wilds.

Let’s get this out of the way right away, Monster 4 is essentially four player Connect 4/Tic-Tac-Toe. Just like in those games the goal is to get a certain amount of your pieces in a row. Of the two Monster 4 plays more like Tic-Tac-Toe except that it features a 4X4 grid instead of a 3X3 grid and it actually supports four players instead of just two.

With the game being a lot like Tic-Tac-Toe you wouldn’t think that the game would have a lot of strategy. The game does rely a lot on luck (which I will get to shortly) but there is more strategy to the game that you would think. The game is far from a strategic game but you need to think about your moves since a mistake will lead to another player winning the game. Most choices are blatantly obvious but the 4X4 grid gives you more choices than you get in Tic-Tac-Toe. The game is also surprisingly cutthroat since there are plenty of options to remove other players’ pieces from the gameboard. Pieces are added and removed from the board so regularly that you always need to be aware of each players’ standing in the game.

The one thing that adds the most intrigue to the game are the skeletons that act as wilds. A surprising amount of thought needs to go into placing wilds on the gameboard since while they help you they also will help all of the other players. The wilds are key in the game because I think almost every winner will need to use at least one wild to win. Without the wilds I honestly don’t think the game would ever end.

The spider is an interesting mechanic but I don’t know how much strategy it really adds to the game. It is usually obvious what you are going to do with the spider. You only have three options in the first place since the spider can only move to one of the areas that it currently isn’t in. You also aren’t going to move the spider to an area where your monsters are located. This means you usually only have one or two areas to move the spider to. The spider does add some strategy to the game since it is easily the most efficient way to stop the other players. It also is beneficial to place monsters in the area that the spider most recently moved to since your monster will be safe from the spider longer than it would if you put it in one of the other areas.

The biggest problem that Monster 4 has to deal with the game’s total reliance on luck. Monster 4 is a simple enough game that it will be rare that someone makes a strategic mistake that lets another player win the game. Since you don’t win through strategy you typically will win the game due to luck. Luck is easily the largest determining factor in who wins the game. Since the dice determines which action you can take, outside of mistakes by the players all games will be determined by the luck of the roll. Whichever player rolls the right symbols at the right times will win the game. No matter how good your strategy is, it won’t overcome bad luck.

With a game that relies so much on luck, it shouldn’t come as a surprise that the game’s length can differ significantly between games. The first game of Monster 4 that I played took around ten minutes because one player got lucky and rolled the right symbol at the right time. The second game we played lasted around 20-30 minutes because it took quite a while for a player to get lucky enough to get four monsters in a row. The problem with the significant differences in length is that you can’t predict how long a game could take. It could be over right away or it could take a long time. As a whole Monster 4 works much better as a shorter game since the game starts to drag if a game lasts more than ten minutes.

Just like with all LEGO games, the instructions strive to get you to tweak rules and come up with your own rules to improve the game. This is something that I have always liked about the LEGO games. A lot of the LEGO games are not great but they allow players to make their own game by making it easy to tweak rules. This is true for Monster 4 as well. The game includes some rule tweaks that look interesting including rules that tweak how the skeletons and spiders work. It should be quite easy to come up with you own rules as well.

Component wise Monster 4 is what you would expect out of a LEGO game. The gameboard is pretty easy to assemble and people who enjoy LEGOs should enjoy just putting the gameboard together. I have to say that the monster pieces and spider are also pretty cute. The only complaint I have is that they could have made the two gravestone colors a little more distinctive since the two gray colors are sometimes hard to distinguish on the die. Basically if you like LEGO you should enjoy the component quality of Monster 4.

While it is basically a glorified version of Tic-Tac-Toe/Connect 4, I was a little surprised by Monster 4. While the game relies almost entirely on luck, it is also surprisingly enjoyable due to its’ simplicity. Anyone can play the game as the rules are so simple. Monster 4 improves on Tic-Tac-Toe by making the game support four players and also adding a little strategy to the game. Monster 4 is never going to be considered a great game but if you want a quick and easy game where you don’t really have to think you can have fun with Monster 4. If you are looking for a tweak to Tic-Tac-Toe you could do a lot worse than Monster 4.