While never as popular as games like Monopoly, the game Sequence has been a pretty popular game. Like with all games that are popular, the spinoffs were inevitable. While Sequence took considerably longer than a lot of games to start cashing in with spinoffs, Sequence has had several spinoffs created over the years. One of those spinoffs was Sequence Dice which took the basic Sequence formula and replaced the cards with dice. While the game is far from perfect and relies almost entirely on luck, Sequence Dice does provide some mindless fun.

How to Play Sequence Dice

Place the board in the middle of the table. Each player/team takes a set of chips. If playing in teams, teammates should alternate seats. Each player/team rolls the dice with the player with the highest roll getting to play first.

A player begins their turn by rolling the dice. The player will get to place one of their chips on a space based on what number they rolled. 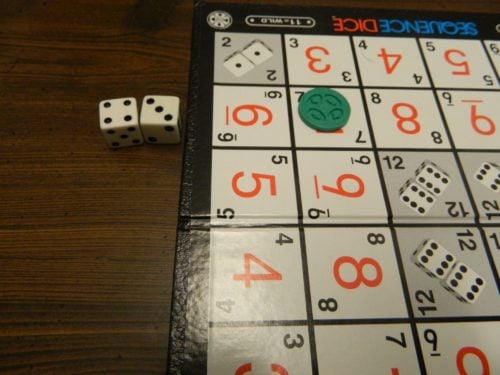 The current player has rolled a seven which allows them to put one of their chips on one of the unoccupied seven spaces.

If all four spaces for the number rolled have already been claimed, the player can replace one of the other players’ chips with one of their chips. 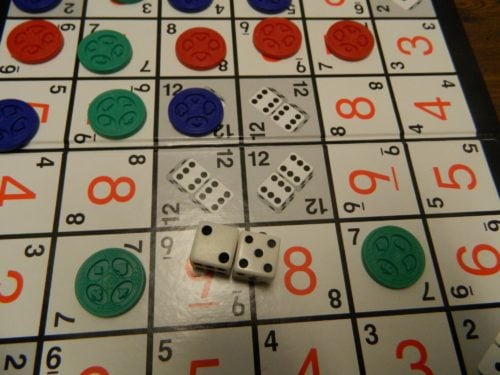 If the current player already occupies all four spaces for the number rolled, their turn ends without them placing a chip. 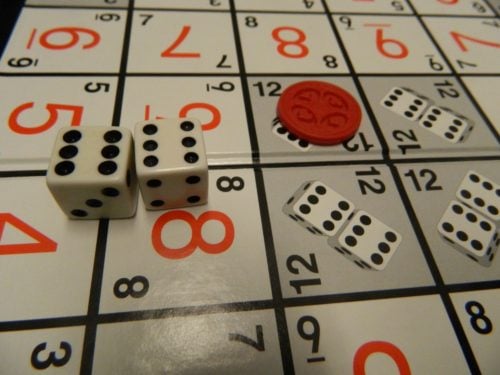 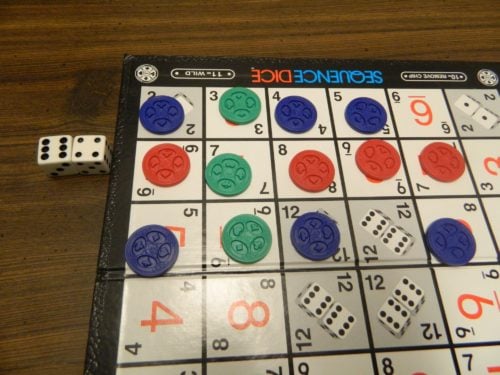 The red player rolled a ten. They are probably going to want to remove the green chip on the seven space so the red player can get five in a row on a future turn.

Number 11: If a player rolls an eleven they can place their chip on any unoccupied space on the board. If all of the spaces are filled, the player can replace one chip on the board with one of their own chips. 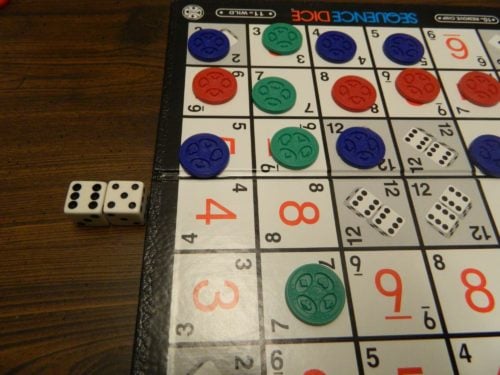 The green player rolled an eleven so they are able to place one chip on an unoccupied space. The green player is going to want to play it on the eight space in order to win the game. 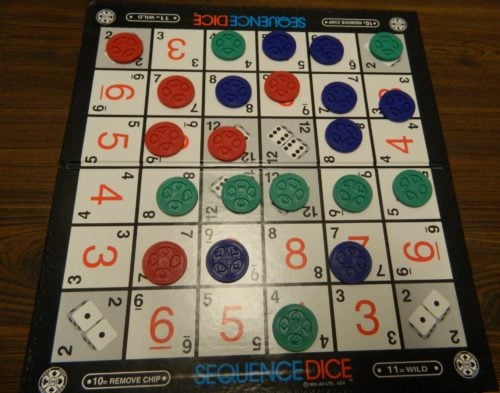 The green player has five chips in a row and has won the game.

My Thoughts on Sequence Dice

The easiest way to explain Sequence Dice and it’s predecessor Sequence would be to call them Connect 4/Tic-Tac-Toe variants. Sequence Dice actually shares quite a bit in common with 5ive Straight. Just like with Connect 4 and Tic-Tac-Toe the goal of the Sequence franchise is to get a certain number of chips in a row. The one tweak in Sequence Dice is that instead of being able to pick where you want to place your chip, the roll of the dice helps determine where you can play a chip.

While I have never played the original Sequence, I believe it would be better than Sequence Dice since there appears to be more strategy since players have more choices. While the original game probably has more strategy, Sequence Dice still has a little strategy. Choosing which space to place a chip on is important since if you are smart while placing your chips you can set up multiple paths to victory.

While Sequence Dice has some strategy, the game relies a lot more on luck. That mostly comes from the fact that most of your decisions in the game are pretty obvious. While good players will have a better chance at winning the game, there isn’t a huge advantage since most of the decisions are usually pretty obvious. Unless you roll one of the wild options, you will get to choose between one to four options. Generally one or two of the options will either really help you or hurt your opponents so it becomes obvious which decision you should make.

The biggest reason why luck determines the winner is that you can usually see that a player is close to winning and you can’t do anything to prevent them unless you roll the right number. I doubt many players will win the game without the other players noticing. When a player wins it is usually going to be because the other players were unable to roll a number to block the player from winning.

Other than using cards instead of dice, the other major difference between the two games is that the original used a 10X10 board while Sequence Dice only uses a 6X6 board. Sequence Dice is a more streamlined version of Sequence. Since the board is more compact it is easier to get five in a row and win the game. I see most games of Sequence Dice taking 10-15 minutes while games of Sequence would probably take considerably longer. While the shorter length makes Sequence Dice a better filler game, the short length also lets luck play a bigger role in the outcome of the game.

As far as components there isn’t a lot of say about the game. The components are completely serviceable but are quite bland. I wonder how the game would play with four players/teams though. I am guessing that during playtesting the board got overcrowded so that is why they stuck with three players. Since you only need chips you could add your own chips to the game to see how a four player version of the game would play.

Should You Buy Sequence Dice?

Sequence Dice is basically one of those completely average games. Outside of the heavy reliance on luck, there is nothing particularly wrong about the game. The game doesn’t do anything fantastic either though. Basically Sequence Dice is a game of mindless fun where you can have a little fun without putting too much thought into what you are doing.

If you don’t like games with a high reliance on luck, Sequence Dice may just drive you nuts. If you are looking for a game of mindless fun though I think you can have fun with Sequence Dice. I would recommend waiting until you can get a really good deal on the game though.

If you would like to purchase Sequence Dice you can purchase it online: Amazon