After both players have placed two tokens, each player then has a choice of what they would like to do on their turn. They can do one of the following: 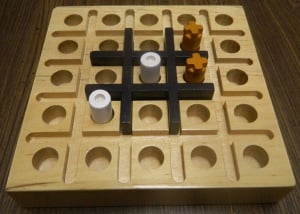 In this situation the white player may want to move the grid diagonally one space to the bottom left. They could also either move one of the two white pieces already on the board or use one of their other two pieces to block the brown player in the bottom right corner.

Based on the name “Tic-Tac Two” you can tell that the game draws heavily from Tic-Tac-Toe. Tic-Tac Two is actually what I would call a variant of Tic-Tac-Toe since it takes the basic rules of the game and adds to them in order to change the game. As a young child I liked playing Tic-Tac-Toe. As you grow up though you quickly discover that Tic-Tac-Toe is not a good game since it is way too simplistic and flawed. As a matter of fact Tic-Tac-Toe has been solved. In Tic-Tac-Toe if both players play their pieces correctly they can always force a tie no matter who goes first or where they place a piece. Check out the Wikipedia article if you want to find out how to automatically at least draw in every single game of Tic-Tac-Toe.

Since Tic-Tac-Toe has been solved, there have been many variations on the game that have been created in order to try and keep the basic mechanic of the game intact while providing a game that will not always result in a tie. Tic-Tac Two’s main gimmick is that the 3X3 grid that the game is played on can be moved around the board by the players. Tic-Tac Two fixes some of the issues with Tic-Tac-Toe, but it ends up creating some of its’ issues.

To begin with, Tic-Tac Two does improve on Tic-Tac-Toe. As far as I am aware, Tic-Tac Two hasn’t been solved. There is no strategy that will automatically let you win or tie every match. Being able to move around the grid insures this and ends up adding more strategy to Tic-Tac Toe. The main reason that Tic-Tac Two is more strategic is because you need to keep track of the pieces as well as the grid itself since players could set up a three in a row situation outside the grid and then move the grid into place in order to win the game. Being able to move the grid doesn’t add a lot of difficulty or strategy to the game though since it is usually pretty obvious when and where you should move the grid. Since the game doesn’t end up in constant draws, Tic-Tac Two is superior to Tic-Tac Toe in my opinion.

The biggest element that moving the grid brings to the game, is piece management. Since once a piece is outside the grid it can’t be moved (until it is back inside the grid), you need to try to keep as many of your pieces in play at a time. Due to this fact you need to try and keep your pieces together since if one piece ends up on one side of the board by itself you might as well kiss it goodbye since it is not worth the effort to move the grid back in order to retrieve it again. Since you only get four pieces you can at max only lose one piece this way to even have a chance of winning the game. I think the best strategy is to place your pieces together and then move the grid towards the direction where your pieces are located. Since it is so easy to lose control of pieces when the grid moves, if one of your pieces is taken out of play due to a grid move you most likely should just reverse the grid move that just occurred.

The situation I explained above is the single biggest issue with the Tic-Tac Two. The ability to move the grid actually leads to Tic-Tac Two being broken just like Tic-Tac Toe. If you have two stubborn players, the game could actually never end. For example a player can move the grid to an advantageous position for themselves. If the other player doesn’t like the new position, they could just reverse the previous move and return the grid to the prior position. If both players are stubborn enough this could keep happening until one of the players finally caves and abandons moving the grid. Tic-Tac Two really needed a rule in place to prevent this from happening. I don’t know what rule should have been added but something needed to be done since whoever is the more stubborn player is likely to win the game. If this problem could have been fixed I think Tic-Tac Two could have been a decent to a good game.

A lot of the problems with the game are due to there being too few pieces for each player. Since you only get four pieces and need to use at least three in order to win, you really don’t have much flexibility in the game. The game could have really used more playing pieces. The game needed at least six pieces for each player and probably closer to ten. With more pieces the game would have had more strategy since you could have set up long term strategies that your opponent may not figure out. With so few pieces you can’t set up long term strategies since you can’t lose control over any of your precious pieces. With only four pieces you need to keep moving the pieces along with the grid so there is not a lot of opportunities to be able to move the grid into position where you already have three pieces in place to win.

Finally I thought the components of the game are decent. All of the components are made out of wood which is always nice. The paint could have used some work though since the paint on some my pieces is fading which is not a good sign with the game being only three years old.

Tic-Tac Two is what you would expect it to be, a variant on Tic-Tac-Toe. Tic-Tac Two is actually an improvement on Tic-Tac-Toe since it fixes the issue where every game can end in a tie if both players play their pieces right. Unfortunately Tic-Tac Two creates its’ own issues which is highlighted by the fact that if both players are stubborn the game could never end since the grid can just be moved back and forth constantly until one player gives up. While more strategic than Tic-Tac-Toe, Tic-Tac Two is far from a strategic game. The game doesn’t have enough pieces which ultimately leads to the winner being either the more stubborn player or the player who doesn’t make a stupid mistake.

If you don’t care for Tic-Tac-Toe, you won’t like Tic-Tac Two either and it obviously doesn’t pay to pick up Tic-Tac Two. If you do like Tic-Tac-Toe though you might be able to get something out of the game. I would probably try to look for a better variant first though.

Simple fix to the stalemate issue: a house rule that forbids you from immediately reversing a grid move. After someone moves the grid, you can move it somewhere different, or you can make a different move and *then* move it back, but you can't just move it back immediately.

Tic-Tac Two needs a rule like this. Forbidding players from immediately reversing a move is a good idea for the game and is actually a rule in a lot of other similar games to prevent this issue from coming up. I agree with you that if you want to play Tic-Tac Two you pretty much need to implement this house rule or a very similar house rule or the game is just not very fun.

[…] I mentioned in my review of Tic-Tac Two, there have been quite a few variants created for Tic-Tac-Toe/Connect 4 over the years. Since both […]