Skip to content
Board Games » Reviews » Children's » Disney Eye Found It! Board Game Review and Rules 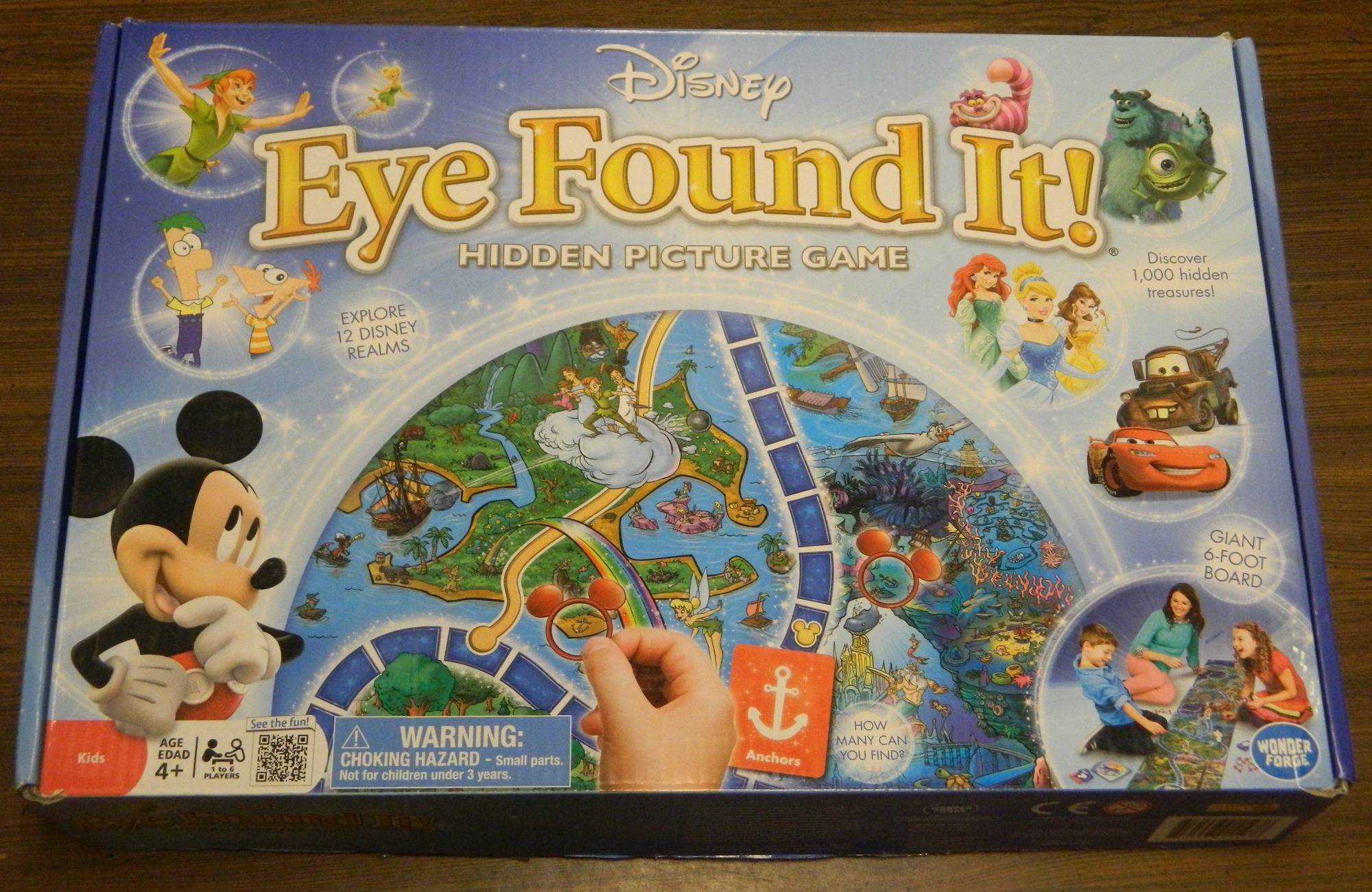 In the past I have looked at quite a few board games in the “Where’s Waldo?” genre where the main gameplay mechanic is trying to find items hidden among a lot of other objects. In the past we have looked at almost the entire Pictureka! franchise (Pictureka!, Pictureka! Card Game, Pictureka! Disney Edition, Pictureka! Flipper, Pictureka! Kubes), Picture Picture, and Scrutineyes just to name a few of the games from this genre that we have played. While I really like the Where’s Waldo? mechanic, outside of Scrutineyes most of the games that I have played have had some issues. I will say that I didn’t have high expectations for Disney Eye Fount It! mostly because the game has a recommended age of 4+ which is usually not a good sign unless you have young children. I gave the game a chance though because I am a big Disney fan and I found the game for like $0.50. Disney Eye Fount It! is pretty fun when you are actually looking for objects but there is too much in between these sections which lead to the game being pretty dull.

How to Play Disney Eye Found It!

A player begins their turn by spinning the spinner. If the spinner stops on a number the player will move their playing piece forward the corresponding number of spaces.

When the path branches off the player can choose which path they prefer. If a player lands on a shortcut space, they will move their playing piece to the other side of the path.

If the player landed on a space on the gameboard they can choose which side of the card they want to use.

To start the search round the timer is flipped over. The word on the card is then read out. All of the players at the same time look over the entire board trying to find pictures that match the word on the card. Players can choose what they believe meets the criteria of the card. When a player finds a matching picture they place one of the markers over the spot. When the timer runs out the round stops. The players count up how many markers they were able to place out on the gameboard. All of the players will move their piece forward as many spaces as matching items that were found.

If a player spins one of the spaces that features the clock, they will move the clock forward the corresponding number of spaces. The same player will then spin the spinner again.

My Thoughts on Disney Eye Found It!

I have looked at quite a few “Where’s Waldo?” games in the past and they have all been competitive games where everyone competed to be the sole winner. It was intrigued when I found out that Disney Eye Fount It! was a cooperative game. I had never thought of it before but this is actually a really interesting combination that I was excited to try out. Instead of players fighting over what should and shouldn’t count as matching the current card, players are working together in order to find as many matching items as possible.

Like with all of the other games from this genre the searching mechanic works quite well. I think having all of the players work together actually makes it even more enjoyable as the players are racing against a clock to find as many matching objects as they can. Most of these type of games have you competing to find the first item that matches the goal. I actually think it is more enjoyable try to find as many of a given item within a given amount of time. In some ways I think this mechanic works better than most of the other games from this genre mostly due to how large the gameboard is. With such a large gameboard there is plenty of areas to search before the timer runs out. If you have any hope of searching the whole board in time you need to divide up the board between the players.

If Disney Eye Found It! solely focused on this mechanic, possibly adding some other mechanics to further support it, I think it could have been a pretty good game. The problem is that outside of the searching mechanics there is very little to the game. Basically the rest of the game is a very basic spin and move game. You spin the spinner and move the corresponding number of spaces. The game has some branching pathways and shortcuts that add a few decisions to the game but otherwise there isn’t much to the game. These mechanics are just really boring. This is a shame because you spend most of the game with the spin and move mechanics instead of the much superior search mechanics. Disney Eye Fount It! basically feels like a spin and move with an occasional mini game where you find objects.

I will say that I haven’t played a lot of board games made for four year olds lately but Disney Eye Fount It! might be one of the most difficult games for four year olds that I have ever seen. The game is far from difficult to play as you just have to move your playing piece forward the number of spaces spun and occasionally look for items on the gameboard. Disney Eye Fount It! is really hard to win though. Maybe it was just the fact that my group got really unlucky but we tried three times to win the game and we lost every single time. We never even got that close to winning. I will say that we didn’t spin particularly well having spun the clock space more often than we statistically should have. I think it will be really hard to win the game unless you spin really well though. I think this is due to a sixth of the spaces moving the clock forward at least one spot. I think the game will be a little easier with less players. With four players even if you spin the clock spaces only as often as you statistically should, you don’t have enough spins in the game to get four plus players through the entire gameboard before the clock hits midnight.

The only way you have any chance of winning the game is if you end up getting a lot of opportunities at search rounds. The search rounds are easily the best way to gain spaces. While you could get up to eight spaces at max from the spinner (most likely considerably less), you are much more likely to get quite a few spaces from the search feature. This is somewhat dependent on what card you play as some are considerably easier to find items for than others. For some cards it is not that difficult to get all twelve spaces as the items are everywhere on the gameboard. There are other cards where you will be lucky to find four items. These spaces are still the easiest way to gain spaces in the game though as all of the players will get to move forward that many spaces. If you don’t get many search rounds you have little chance of winning the game and on top of that the game won’t be particularly fun.

On the component front the first thing that is going to grab your attention is the gameboard. The gameboard is six feet long and I find it hard to believe that there are many gameboards that are longer. I knew the gameboard was going to be long but you don’t really realize until you actually set it up. Unless you have a really long table you pretty much have to play the game on the floor. While the length creates some issues it also gives the game more space to hide objects. This is complimented by the fact that the artwork is quite good. Any Disney fans should appreciate the game’s artwork. While I really liked the artwork I will point out that some of the pictures are quite small which may be a problem for people without great eyesight. Outside the gameboard though the components are pretty average.

While I knew there was a Eye Found It! series I have to say that I was a little surprised by how many games have been developed for the Eye Found It! franchise. The franchise began with Richard Scarry’s Busytown (Amazon

) in 2009. Disney Eye Found It! came next in 2013. After the Disney game the series added Despicable Me (Amazon

). For the most part it seems like the gameplay has stayed the same even though some of the later games seems to have ditched some of the spin and move mechanics.

Should You Buy Disney Eye Found It!?

Disney Eye Found It! was an interesting experience. I can’t say that I had particularly high expectations for the game due to the fact that the game had a 4+ age recommendation. I actually think the game deserves some credit for actually coming up with some interesting ideas for the “Where’s Waldo?” genre of games. I think adding a cooperative element to the game brings something new to the genre that you don’t find in the other games in the genre. The search mechanic is actually quite a bit more fun than I expected. Unfortunately there isn’t much else to the game. You end up spending most of the game with a boring spin and move mechanic. The game is also surprisingly hard to win as the game forces you to rely on a lot of luck in order to win.

It is kind of a shame that Disney Eye Found It! had to add the spin and move mechanic because I think the game could have been pretty good if it just focused on the searching mechanic. Unfortunately due to the boring spin and move mechanic the game is pretty boring for everyone outside of young children and their parents. Therefore I probably would only recommend Disney Eye Found It! to parents with young children and maybe people that really love Disney animated movies.

If you would like to purchase Disney Eye Found It! you can find it online: Amazon

One thought on “Disney Eye Found It! Board Game Review and Rules”