Place the penguin on top of the iceberg. Place 48 of the picture cards underneath the penguin’s flipper. Shuffle the mission cards (cards with words on them) and place them near the penguin so everyone is able to see them. Turn the penguin’s switch to the on position and squeeze his beak to start the game.

The penguin will flip the tiles onto the table. Players need to wait until the penguin stops flipping tiles. When the penguin has stopped look at the light on the penguin’s head and find the matching color on the top mission card. Players then search through all of the cards on the table for a card that matches the mission. When you find something that matches the mission call Pictureka! and tell the other players what you found. If the players agree that you are right, you take the picture card. Players keep looking for cards that match the current mission. 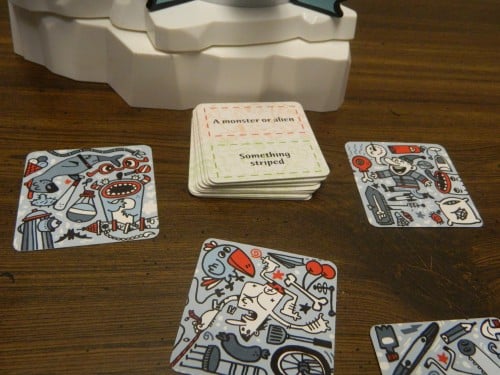 If the light on the penguin is red, players would look for a monster or alien. They could take the card on the left because it features a monster. If the color is green they would look for something striped which includes the person’s shirt on the right card.

Occasionally the light on the penguin’s head will change colors. Before the light changes the penguin makes a noise. When the color changes the players need to find objects that match the mission of the new color. When both missions on one side of the card have been used, flip the card over to the other side for two new missions. When all of the missions on the card have been used, set the card off to the side and start using the next mission card.

The game continues until the penguin blows a raspberry or you run out of picture tiles. The player who collects the most picture tiles wins the game.

A couple years ago I played the original Pictureka! and I was pleasantly surprised. It was a fun implementation of the Where’s Waldo concept where you have to find specific objects within a group of random objects. The original Pictureka! was a good family game that could be enjoyed by both kids and adults. Even though I am skeptical of spin off games, I was interested in checking out Pictureka! Flipper because I enjoyed the original game. Unfortunately Pictureka! Flipper fails for many of the same reasons that most spin off games fail.

On the positive side the elements of the original Pictureka! are present in Pictureka! Flipper and are still fun. It is fun frantically looking through the pictures for the objects that you need to find. The mechanic is simple so it works well for children. Kids will probably enjoy it more than adults, but adults could have fun with this element of the game.

The problem with Pictureka! Flipper is that like most spin off games, the designers tried to add more mechanics to the game than were necessary. Pictureka! really didn’t need any more mechanics but the game decided to add some anyway. Almost all of the problems with the game come from the Penguin.

According to the instructions the penguin is supposed to shoot the cards up to 12 inches. My penguin must have taken some performance enhancing drugs because it shoots the cards multiple times further than that. Once the penguin starts flipping cards they are flying everywhere. To keep the cards on the table all of the players have to play goalies using their arms to block the cards from flying off the table. Cards still found ways of flying off the table. The penguin didn’t seem to distribute the cards very evenly either placing a lot more cards in front of some players than others giving those players an advantage. While this might not be the case for every copy of the game, this is a pretty big problem since you have to spend so much effort just trying to keep the cards on the table.

Another problem with the penguin is that it just doesn’t give players enough time. The game probably gives you like 15-20 seconds to find any given item before it switches to the next mission. That is not a lot of time to find a card that matches the current mission. Add onto that the fact that you need to try and verify that other players were correct in taking a card and the situation becomes even worse. You need to either trust that the other players aren’t cheating or you need to waste all of your time for a given round verifying someone else’s card. The game becomes frantic and chaotic as you try to do so much in such a short amount of time. I don’t know why the game has to rush you so much either since the game is really short to begin with. The game probably only takes three to five minutes to finish. The game would have been better served by being like ten minutes long and giving each player more time for each mission.

In addition to not having enough time to verify if a player should be allowed to take a card, it is usually quite subjective whether a player should be able to take the card. There are quite a few situations where a player thinks they should be able to take a card while another player doesn’t think they should be able to. For example one of the missions is to find something with a big mouth. Some people will think something has a big mouth while another player won’t think it is big. Since you have next to no time to judge whether the card should be taken you can’t really even discuss whether the card should be taken or not.

The components for the game are decent overall. The penguin is cute and works (a little too well). The artwork on the cards is really nice. Like the other Picturekas the artwork is quirky/strange but I really like the style. The card quality is decent but the cards will get damaged from normal gameplay.

While the original Pictureka! was a pleasant surprise, Pictureka! Flipper is a disappointment. Pictureka! Flipper is the perfect example of too many mechanics being detrimental to a game. Other than being cute the penguin adds nothing valuable to the game and ends up making the game worse. The penguin flips the cards way too far making it chaotic just trying to keep all of the cards on the table. The penguin also doesn’t give you nearly enough time for any given mission.