Pictureka! Card Game has four different games that you can play with the cards. In all of the games the penguin with the multi-colored background counts as a wild card. The games are as follows.

To begin the game each player is dealt eight cards facedown. Each player shuffles their cards and forms four piles in front of them with two cards in each pile (cards face up). The first mission card is flipped over and the game begins. 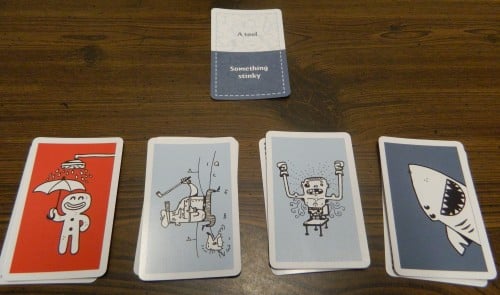 One of the two current missions is “something stinky”. The boxer looks stinky so the player could play this card.

The first player to get rid of all eight of their cards wins the game.

The mission cards aren’t used in this game so they are removed from the table. Shuffle the picture cards and give them to the oldest player to start the game. Before the game begins decide which range of letters you are going to use for the game. For example you can play letters A-M or C-O.

If the current letter is A the player could point to the red card and say “ankle”. The player would then take the red card to indicate that they won one of the rounds.

The game continues until you reach the end of the range agreed to before the game began. Players count up the number of cards that they have. Whichever player has the most cards wins the game.

Shuffle the picture cards and place cards facedown on the table to form a 5X4 grid. Shuffle the mission cards and turn the first card face up. Whichever players makes the best face gets to start the game. 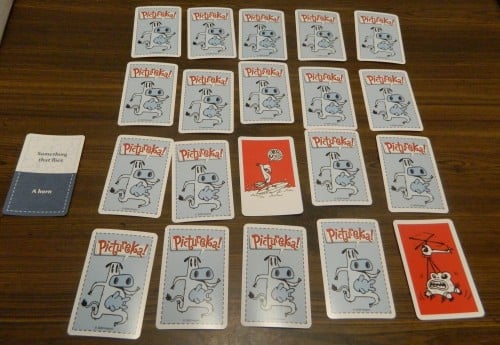 The two face up cards match the mission of “something that flies” since the bird and helicopter both fly. The player who flipped these cards over gets to take the mission card and the two flipped over cards get replaced with two new picture cards.

If the two cards weren’t a match, they are flipped back over in the spot that they were taken from. Play then moves to the next player. If none of the players can find a match, choose a new mission card.

During a player’s turn they look at the cards in their hand to see if three of their picture cards match either of the missions. The cards must all match the same mission. If there aren’t three pictures that match the mission, discard one of your picture cards face up and draw a new card. Check if you now have three cards that match one of the missions. If you still can’t find three cards that match, choose two of the cards from your hand and pass them face down to the player on your left. Play then passes to that player. 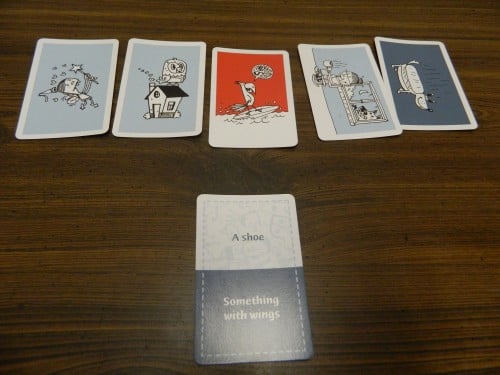 This player has three cards that match one of the missions. The three left cards feature things with wings.

The biggest problem with the Pictureka! Card Game is that I just didn’t have that much fun with the game. If someone else really wanted to play the game I would play it but I don’t ever see choosing to play the game for myself. The card game just isn’t as fun as I remember the original game being. After not liking the card game and flipper game I am really starting to wonder if Pictureka! is as good as I remember it being.

I think one of the reasons that I didn’t enjoy the game as much as I thought I would is that the game relies quite a bit on luck. The original Pictureka has a lot of luck as well but in several of the games included in the Pictureka Card Game, card draw luck has a big impact on who will win. The original Pictureka focused more on who was fast enough to match the mission instead of getting lucky and getting the right cards to win. Alphabetti is the only game that relies purely on speed. The speed element is one of the best parts of Pictureka so I think that is one of the reasons I didn’t enjoy the card game as much as the original game.

The other reason I didn’t enjoy the game as much as I would have thought is the game feels mostly like a family/children’s game. I like plenty of family games but the Pictureka! Card Game felt like a game that you should play with children since the game gets kind of dull if you only play it with adults. If you have younger children you should enjoy the game more than I did.

I do give the game credit for creating four different games that you can play with the cards. This gives you some options on how you would like to play the game. In particular I liked that it included speed games and games that give you time to think without having to be the fastest player. This is good for younger children and people who don’t like speed games. I personally preferred the two speed games but there are a lot of people that hate speed games.

The problem with the four games is that they aren’t that different when you really think about it. The only differences between 8-Away and Alphabetti is whether players have their own cards and if you match a mission or a letter. The non-speed games are a little different. Matchureka adds a matching/memory element to the game but uses the same basic gameplay from all of the other games. I didn’t particularly care for it since I don’t really like memory games. Finally Cow’s Creative Combo just has players find three cards from their hand that match a mission.

One of the problems with the Pictureka! Card Game is something that is prevalent in all of the other Pictureka! games. Since the missions are usually pretty broad, players are going to argue about what should count as an acceptable answer. Some players will think an answer should count while another player thinks that they are stretching the mission too far. I really can’t think of a way to fix this problem either. The only thing you can do is vote and whichever side gets more votes gets their way.

While not as bad as Pictureka! Flipper, I didn’t feel the card game was as good as the original either. It is an okay game but feels more like a family game than anything else and can get pretty dull for adults. It is nice that the game has four different games to play with the cards but the games are pretty similar with there being only slight differences.