Created in 1992 Scrutineyes is a game that kind of went under the radar. The game appears to have never sold well since it only had one print run. The game seems to have quite a few fans though since it has pretty good ratings on Board Game Geek. I always like finding hidden gems so I was interested in trying out Scrutineyes after finding it for a couple dollars at a thrift store. I generally like party games but I had never played Scrutineyes before so I didn’t know what to expect out of the game. While Scrutineyes is not a perfect game, it is a simple yet fun little party game.

Players divide into teams (preferably two players per team). Each team takes a picture, a picture holder and a score pad. The players choose which side of the cards they will use (cartoon or realistic art). One of the players roll the dice. The players will use one of the covers to cover up the side of the picture that was rolled. 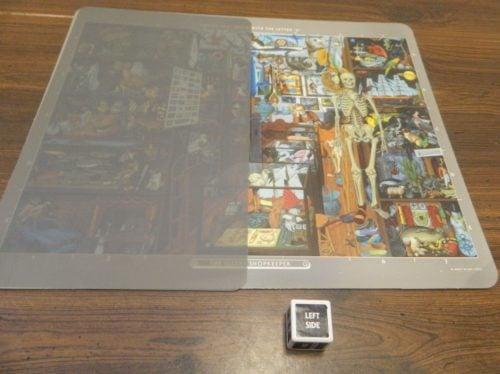 The die roll of “left side” forces all of the players to cover up the left side of their picture.

To begin the first round the timer is flipped over. Each team looks at their picture and writes down answers that fit the category of the card. One player should be dedicated to writing down their team’s answers while the other players look for things to write down. When the timer runs out all players have to stop writing down answers. 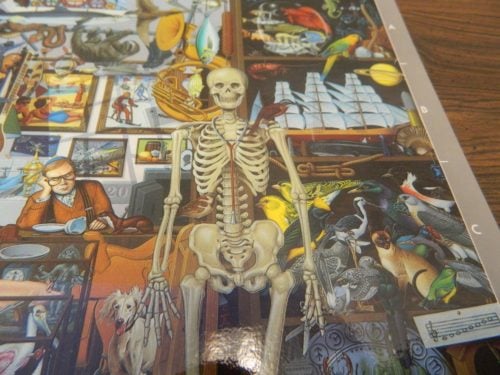 For this picture players have to find objects that start with the letter S. Two options include skeleton and stethoscope.

Each team passes their card to the team on their left. The timer is flipped over again and every team writes down their answers for the new card. The teams keep passing the cards until each team has had every card one time. 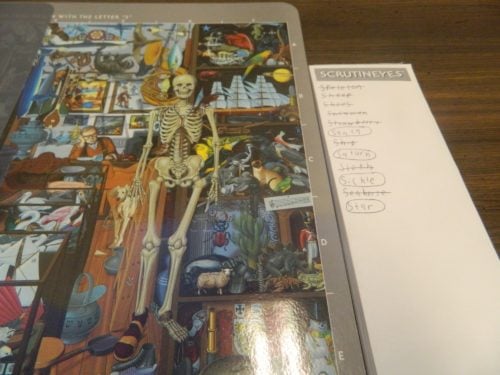 The round has ended and the teams have compared their answers. This team has found four items that none of the other teams found so they will score four points from this picture.

For the second round each player uses the picture they originally started with. In this round the player who wrote down the answers in the first round will look at the picture. In the second round the player tries to find items that none of the teams listed in the first round. When the timer runs out, each team reveals their answers. For each new item found the team scores one point. For every answer that was given during the first round, the team will score negative two points.

The game ends after the second round. The team with the most points wins the game. If there is a tie, all of the tied players play the first round again with new cards.

I think the best classification for Scrutineyes is as a party game. Scrutineyes is the type of game that takes minutes to teach to new players. The rules are simple enough that new players should have no trouble picking them up in their first game. The game mostly has an 18+ age recommendation since it has some adult themes in some of the pictures. There is Scrutineyes Junior

if you want a version of the game that is more appropriate for children. The length of the game kind of depends on the number of players. I would guess that most games would last around 20-30 minutes depending on the number of players. If you are looking for a shorter party game that basically anyone can play Scrutineyes may be the game you are looking for.

While I believe there have been a couple board games with a similar premise,I haven’t played any of them yet so I really can’t compare them to Scrutineyes. As far as Scrutineyes is concerned I was a little surprised by how much I enjoyed the game. While I wouldn’t consider it a game that I would play all of the time, it is enjoyable enough that I would come back to it every so often.

While Scrutineyes’ gameplay is the same no matter which side of the cards you play, the two sides of the cards actually feel quite different. Let’s begin with the side that I refer to as the artsy side. This side features pictures that look more like paintings. All of the objects in these images start with the same letter. Your goal is to find objects that can be referred to by a term that starts with the specific letter for that picture. While there are quite a few objects that can be referred to by common vocabulary, this side of the cards feels like a vocabulary trivia contest. The best way to score points is to find objects with names that the other players likely wouldn’t come up with. This side of the cards is surprisingly more mentally stimulating than I was expecting. You could actually learn quite a bit of vocabulary by looking at the picture and referencing the answer book to find the technical term for the objects.

So Scrutineyes was designed as a team game but I actually think it works better as an individual game. As a team game one player is forced to write down answers while the other player(s) look through the picture for objects to write down. This is kind of boring for the players that have to write down answers since the most enjoyable part of the game is looking for objects in the picture. While the writer gets to look for objects in the second round, I personally am not a huge fan of the second round. While it switches up the gameplay, I personally think it would be more enjoyable just playing the first round again. As an individual game all of the players are looking for objects and writing down answers. This keeps all of the players more engaged and makes for a more enjoyable game.

One of the bigger issues I have with Scrutineyes is the fact that you are never going to have enough time to write down everything you see. You will be constantly writing things down hoping to get as many things written down as possible before time runs out. This does give a big advantage to whichever team has the fastest writer. Since you can’t write down everything you have to make choices hoping that the other teams write down other things. You could try to write down as many things as possible hoping to go for quantity. Otherwise you can try to find things that you don’t think the other teams are going to notice. If you only focus on obscure things though the other teams could score points for obvious things that you decided not to write down. I really wish Scrutineyes would have included a longer timer. It wouldn’t have eliminated the entire problem but players wouldn’t be as rushed and could write down most of the things that they see in the picture.

While Scrutineyes’ scoring is pretty simplistic, it tends to take quite a while. The scoring is the same as Scattergories where you score one point for every answer that you provide that none of the other teams provide. You have to go through all of the pictures though and each team is going to have quite a few items for each picture. Comparing every team’s list takes longer than you would expect. Then you have to figure out which responses should be considered the same and which answers should even count. While the game provides an answer book to help settle disputes, it takes a while to look up things in the book. While the scoring is not difficult, it takes longer than it should.

I think the biggest potential issue for Scrutineyes though is with replayability. The game includes 12 picture cards with each card being double sided which leads to 24 pictures. Adding in the fact that part of the picture is covered each time you play the game you will be able to play each card a couple times. With only 24 pictures though you could end up repeating pictures pretty quickly. While there is no way you are going to remember everything in each picture, the game is going to be less fun if you already know what to look for in each picture. The replayability issue doesn’t ruin the game but it kind of forces you to play the game occasionally so you have time to forget about the objects on each card.

While on the topic of components, Scrutineyes does a pretty good job for the most part. The best components in the game are easily the picture cards. While I wish there were more of them, you can’t complain about the quality of the art. The cards are quite large and feature enough items that you can keep looking at the cards and find new things in them. The artwork in general is really well done. The other game components are nothing special but they do their job. The biggest problem with the components is the fact that the game comes in a pretty big box and is surprisingly heavy. If you buy the game, Scrutineyes will take up quite a bit of one of your shelves.

While not perfect I enjoyed playing Scrutineyes. While the game is really simple and relies a lot on speed, there is quite a bit more to the game than I was expecting. While it is easy to just write down a lot of obvious answers, you might be better off trying to find hidden objects and objects that the other players won’t know the terms for. The artwork is really well done and quite clever. The game doesn’t give you enough time though as you are racing to write down as much as you can in every round. The scoring takes longer than it should and with the number of cards included in the game you will have to take breaks from the game or you will have to repeat the cards pretty quickly.

If the game’s premise doesn’t really interest you, Scrutineyes probably won’t be for you. If the idea of mixing a game like Scattergories with Where’s Waldo sounds interesting to you, I think you will enjoy Scrutineyes. If you can get a good deal on the game I would recommend picking it up.

If you would like to purchase Scrutineyes you can find it online: Amazon