How to Play Pictureka! Disney Edition

Layout out the tiles in a 3 x 4 grid. Separate the cards by their color and shuffle each set of cards. All of the players should agree to whether they are going to use the top, middle or bottom row of the green and red cards. Pick the first player in any agreeable fashion and decide whether you are going to use the Round & Round or Mish Mash rules.

With the Round & Round rules you will play several rounds of each color of card before moving onto the next color. The game begins with the blue cards followed by the green cards and then the red cards. The number of rounds that you will play with each color depends on the number of players.

With the “Mish Mash” rules, each player begins their turn by rolling the dice. The number that is rolled determines which color card will be played. 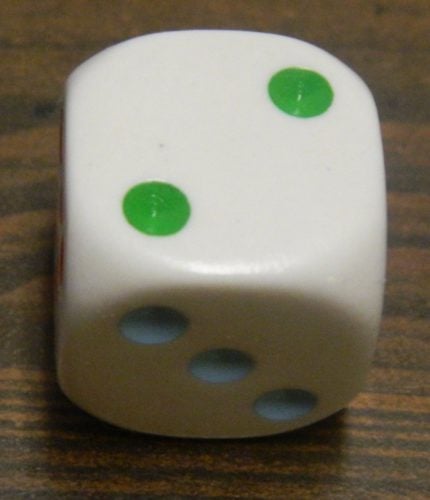 This player rolled a two so they will flip over the top green card.

Players take turns rolling the dice and playing the corresponding card. Whichever player wins a card gets to take it for the rest of the game. The first player to acquire six cards wins the game.

Blue: Find it First – The current player flips over the top card. The card will picture an item that only appears once on the tiles. All of the players look for the item. When a player finds the item they shout Pictureka! and they point to the item. If they are correct they take the card. 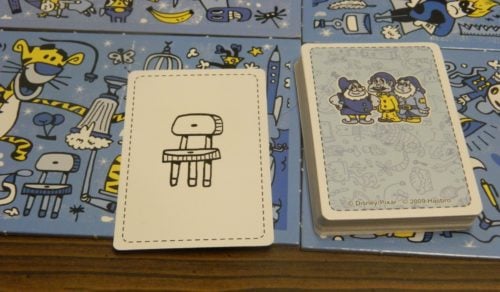 For this round all of the players have to find this chair on one of the tiles.

Green: Personal – The current player flips over the top card. They will then roll the die which determines how many items that they have to find that match the description of the row chosen for the game. The timer is flipped over and the current player has to find that many items before the timer runs out. If they find enough items they take the card. If not the card goes on the bottom of the pile. 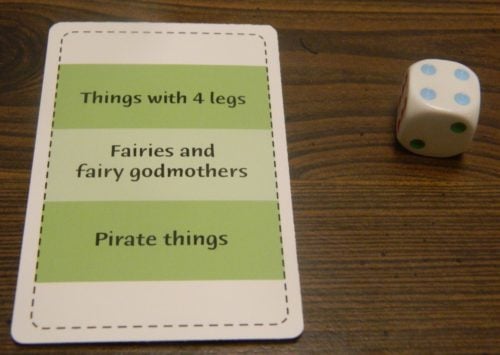 The current player will have to either find four “things with 4 legs”, “fairies and fairy godmothers”, or “pirate things”. Which items they have to find is dependent on what row they chose at the beginning of the game.

Red: My Tile – Each player chooses two of the tiles and places them in front of themselves. The top card is flipped over and everyone needs to try and find the item that matches the description of the row that was chosen for the game. As soon as a player finds an item that matches the description they yell out Pictureka! and point towards the item. If they were correct they get to take the card. The tiles are then all put back to reform a 3 x 4 grid.

If the players are using the top row, this player could win by pointing to the sword to the left of the card. 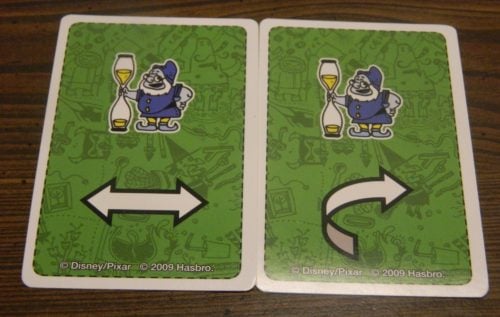 My Thoughts on Pictureka! Disney Edition

For those of you not familiar with the Pictureka! franchise, the games are basically what you would get if you made a board game out of a Where’s Waldo book. Your goal is to find certain objects hidden among a bunch of other objects. In some rounds you compete against the other players and in others you are competing against the clock.

With such simple mechanics it is not surprising that the game is really easy to pickup and play. While the game has a recommended age of 6+ I think children under six could probably play the game with a little assistance from adults. While you might have to occasionally reference the rules to remember what you do for each type of card, the game is very self-explanatory. It should take at most minutes to teach the game to a new player. I would say that you should expect most games of Pictureka! Disney Edition to last around 15-20 minutes.

After the blue cards I would probably say that the green cards are the next best cards. I actually really like the idea of having to find items  that fit a given description. There are a couple problems with the mechanic though. The first problem is that luck plays a big role since you can roll a low number which makes it really easy or you could roll a high number which makes it much more difficult. The other problem is that so many of the descriptions are really subjective. How do you determine what is “ugly” or “pretty”? This can lead to players fighting over whether an item fits the category or not.

One of the issues that I had with Pictureka! Disney Edition is that it is a game that can become repetitive pretty quickly. The game can be fun for 20-30 minutes but I think it will get pretty dull after that point. I see Pictureka! being the type of game that you play every so often since you basically do the same thing in every game. With the number of cards and tiles included in the game I can see it being somewhat easy to memorize where certain items are located which will take some of the fun out of the game.

Seeing as this was Pictureka! Disney Edition I was curious how much it differed from the original Pictureka! For the most part the two games are exactly the same. There appears to only be two real differences between the two games. The first difference is that Pictureka! Disney Edition uses a 4 x 3 grid instead of the 3 x 3 grid used in the original game. The other difference involves the red cards. In the original version of the game the red cards were used for an auction round where players bid how many they could find of a given type of object. In the Disney edition the players have their own tiles which they try to find an object in. This change is not particularly significant since I don’t really care for either option.

The biggest problem that I had with Pictureka! Disney Edition is that there are just better Where’s Waldo style board games out there. A while back we looked at Scrutineyes which doesn’t play exactly the same but shares quite a bit in common with the Pictureka! franchise. With a niche genre like the hidden object genre I don’t know if I really see keeping more than a couple games. Pictureka! will probably work much better with younger children than just adults. I think Scrutineyes is a better game though since there is just more to do in the game.

The component quality of the game is basically what you would expect out of a Hasbro game. There is nothing particularly wrong with the components but they obviously don’t compare with more expensive board games. Just like with the rest of the Pictureka! franchise, I really like the game’s artwork. The game’s artwork is quirky and I like how it was used with the Disney characters. One complaint I have with the Pictureka! components is that the game could come with quite a few more cards. With only 55 cards you can play through the cards quite quickly and will then have to repeat them. You could probably remember the boards pretty quickly as well which makes Pictureka! the type of game that you really need to take time off from between plays.

Should You Buy Pictureka! Disney Edition?

Pictureka! Disney Edition is an okay game but it is not great either. The game is easy and quick to play. You can have some fun with the game but it can get repetitive rather quickly. The game only really has three mechanics and they are very similar. With extended play you can also remember the boards pretty well. Adults can have some fun with Pictureka!. I can see the game working much better with younger children though.

If you don’t care for hidden object games, I don’t see you liking Pictureka! Disney Edition. If you like the Where’s Waldo premise, you might get some enjoyment out of Pictureka! Younger children will probably really like the game. If you don’t have young children though I would only recommend Pictureka! Disney Edition if you can find it for really cheap since games like Scrutineyes are better Where’s Waldo style games.

If you would like to purchase Pictureka! Disney Edition you can find it online: Amazon