How to Play Picture Picture 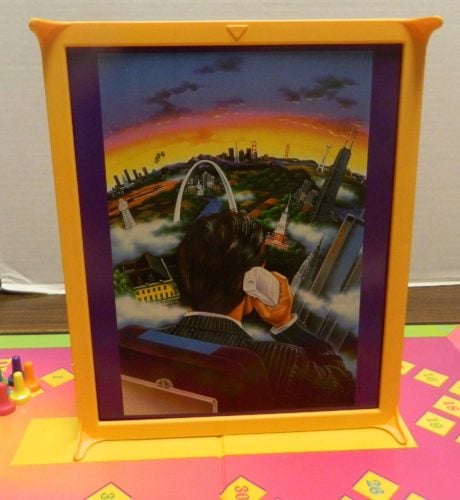 For this round the players will have to write down words for items they see in this picture.

While the timer runs each player studies the picture. Players are trying to write down one item for every letter on their answer sheet that they think none of the other players will come up with. Some rules to follow when writing down words:

When the timer runs out the round ends with players only being able to finish words they were already writing. The players will then go through their lists to compare their answers. If two or more players wrote down the same word they score no points for that word. If a player comes up with a unique word though they receive points for that word. Most letters are only worth one point but some letters are worth several points. Once all of the players have gone through all of their words they will move their playing piece forward as many spaces as unique words that they were able to come up with. 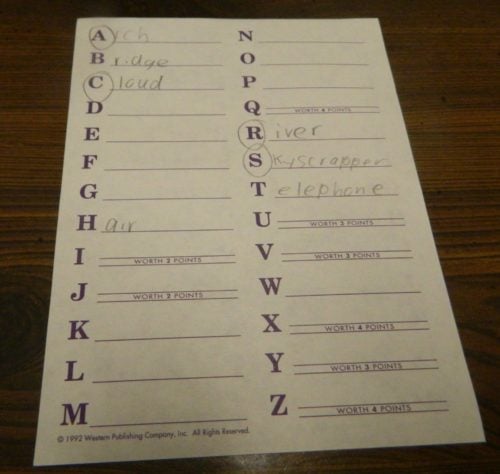 This player has come up with four answers that none of the other players came up with so they will get to move their piece forward four spaces.

If no player(s) have reached the finish line, another round is played. 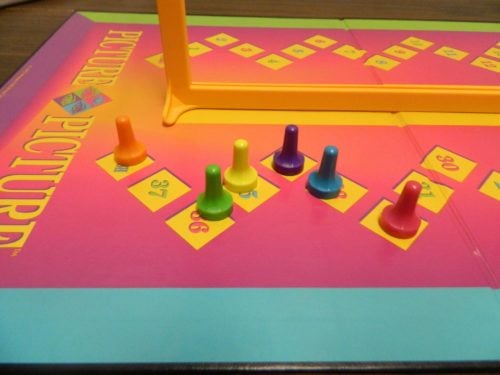 The orange player has won the game by reaching the finish space.

My Thoughts on Picture Picture

So I started out the review by talking about Scrutineyes and after playing the game I have to say that comparison is definitely warranted. Before playing the game I could tell the two games shared things in common but after playing Picture Picture I would have to say the two games share a lot in common. Outside of some slight differences here and there Picture Picture and Scrutineyes are basically the exact same game.

Scrutineyes and Picture Picture have so much in common that they were even released in the same year. I am kind of curious how two competing board game companies ended up creating the same concept for a board game at basically the same time. Other than the games being released in the same year, the premise of both games are exactly the same. Your goal in both games is to write down as many things as you can trying to come up with items that the other players won’t think of. The player who ends up finding the most unique items wins the game.

As the basic gameplay is exactly the same in both games, my general thoughts on Picture Picture are very similar to those of Scrutineyes. Both games are fun little party games. They kind of feel like scavenger hunts as you are hunting for items that you don’t think the other players are going to notice. There is something satisfying about finding items that the other players weren’t able to find. While this premise is not going to appeal to anyone, if it does you will probably enjoy Picture Picture.

Probably the most noticeable difference involves how players develop their lists. In Scrutineyes players are given prompts such as “Starts with a S” or “Sports Team Names” and players had to find answers that met those prompts. They could write as many answers as they wanted based on how fast they could write. The focus of the game was more about finding hard to spot items or using terms that the other players weren’t familiar with. Meanwhile Picture Picture utilizes a Scattergories type mechanic where you can only come up with one word for every letter.

Scrutineyes is better in this area because it gives players more direction and keeps the players focused on what is most important in the game. In Picture Picture you could literally write down anything you see in the picture as long as it works for one of the letters that you haven’t yet come up with a word for. Since you have to try to come up with a word for every letter though, you spend more time trying to figure out what letters you can actually use rather than looking for items. Instead of looking for hard to find items in the picture you are stuck thinking “What is there in the picture that starts with the letter B, C, etc.?” This is compounded by the fact that the game doesn’t give you enough time to come up with a word for most of the letters. Instead of wasting time trying to figure out if you have already used a letter it is a better use of time trying to find more objects. Scrutineyes is better than Picture Picture in this area because it focuses more on the enjoyable parts of the game (finding things) rather than wasting time looking at what letters you haven’t used yet.

When players start debating whether an answer should count or not, this change in how lists are created creates additional problems for Picture Picture. In Scrutineyes it is not as big of deal as you can have as many answers as you can physically write down within the time limit. In Picture Picture though there are more problems because there are actual limits on how many answers you can write down. Since you can only write down one answer for each letter, the players are more likely to argue about whether an answer should count or whether it matches another player’s answer. While these problems are present in Scrutineyes as well, since you can write down as many answers as you want they aren’t as big of a problem.

I had two problems with the pictures in Picture Picture. First while some of the pictures have a lot of items in them, quite a few of the pictures don’t have that many items. For a game where you are trying to find things in a picture, I don’t think it is a good idea to not have many items in the picture. For players to score points with those pictures they have to be creative in choosing what words to use. Meanwhile every picture in Scrutineyes was filled with so many items that it would be hard to not find a couple items that the other players didn’t see.

The other problem with the pictures in Picture Picture is that all of the players have to use the same picture at the same time. While the picture is double sided, it is pretty hard to see any real details in the pictures while everyone is crowded around the same picture. While it took longer I actually preferred that Scrutineyes has each player take a turn with each picture so players can look at their picture as close as they want without getting in another player’s way.

Should You Buy Picture Picture?

I would say that Picture Picture is a pretty solid game overall. You can have fun with the game as it is basically a board game version of a scavenger hunt. The game is quick and easy to play. If the game’s premise interests you, you will probably get quite a bit of enjoyment out of the game. The problem is that there have been several other board games made with basically the same premise. One of those games (Scrutineyes) was even released the same year as Picture Picture. In my opinion Scrutineyes is the better game as it is more polished. That doesn’t mean that Picture Picture is a bad game but if you only want one of these type of games I would probably recommend picking up Scrutineyes.

If you would like to purchase Picture Picture you can find it online: Amazon