A player can win the game in two different ways:

A player’s turn begins with the player cutting the deck. Once the deck has been cut the player can decide if they would like to take the top card from the bottom stack or if they would like to take the bottom card from the top stack (without looking at it). The player can judge the riskiness of the card on the top of the bottom stack based on the color of the card. Green cards are low risk/low reward (has only one fruit on the card). Yellow cards are moderate risk/moderate reward (has two fruits on the card). Red cards are high risk/high reward (five fruits on the card). 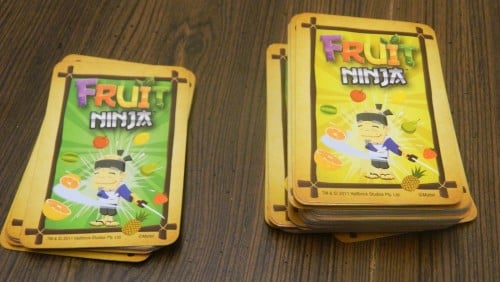 In the above picture the player has cut the deck. The bottom half of the deck has the green card on the top. The player can now choose either the green card showing (low risk/reward) or they can take a risk by taking the bottom card from the other pile not knowing how risky the card is.

If the card chosen is either a fruit or a banana the card is added to the players pile. If the card chosen is a bomb the players’ turn is over and they lose all of the cards in their pile. If the bomb was the first card the player took in the round, the bomb is ignored. If the players’ turn is not ended by a bomb they get to choose whether they would like to continue taking cards or if they would like to quit for the round and bank the cards in their pile so they can’t be lost from a bomb. If the player decides to continue taking cards they need to cut the cards from the top half from the previous cut. The player then chooses one of the two cards again.

In the above picture the player has acquired one strawberry, four lemons, five watermelons, and one steal 1 fruit banana. The player can either choose to bank the cards or they can risk all of these cards and draw another card.

Fruit Ninja has been a very popular mobile app since it was introduced in 2010. It should not come as much of a surprise that people decided to try and cash in on the game’s popularity. Mattel decided to make a card game based on the game in 2011. Being a tie in, I wasn’t expecting much from the game. It simply looked like a simple cash grab to earn some money off the game’s popularity. The only real reason I even picked up the game was that I found it for $0.50 at a thrift store. I can’t help picking up a board/card game when I find it for $0.50. After playing the game I have to say that I was actually pleasantly surprised.

The game is very simple to learn and play. The game probably takes two or three minutes at max to explain to people who have never played the game before. You essentially cut the deck and decide which card you would like to take. You then have to decide if you want to take a risk and continue or if you want to bank your cards. Throughout the game you just need to keep track of what kinds and how many fruits you have. That is pretty much it. The game has a recommended age of 5+ and that sounds right.

So the Fruit Ninja card game essentially boils down to a press your luck game. It is a very simple game. Fruit Ninja has no skill to it and you are pretty much just guessing on whether you are going to get lucky or not. Luck will determine the winner of every game. Despite all of this there is some fun that can be had playing the game.

The main gameplay mechanic of the game is cutting the deck. While it really doesn’t impact the game very much, I thought the mechanic was kind of clever. It is more fun cutting the deck to pick a card rather than just taking the top card from the deck. It also does a good job reinforcing the theme. I think the instructions overplay the importance on deciding how far down the deck you want to cut the cards though. You obviously want to cut far enough in the deck that you are able to make a couple additional cuts if you want but other than that it really doesn’t matter where you cut the cards.

I also really liked the mechanic that the color of the cards indicated the risk of the card. In a lot of press your luck games you get no indication on how much risk you are taking since you are just taking a card randomly. In Fruit Ninja green is low risk but only rewards you with one fruit. Yellow cards have a higher risk but reward you with two fruits. Finally the red cards have high risk but also offer five fruits. The color coding gives you some information in order to help you decide whether or not to take the risk.

The game has quite a few issues though.

My first problem is with the rule that if the first card you take is a bomb, you can ignore it. With this rule you might as well take the riskiest card you can with your first card since if you get a bomb it won’t hurt you. If you are lucky you might get a lot of fruit without actually taking any risk. Generally the player ended up drawing a bomb and didn’t benefit off the rule, but they didn’t really lose anything either by taking the risk.

Fruit Ninjas also has too many bombs in the deck. There obviously needs to be enough bombs that there is actually a risk in taking additional cards. If there weren’t many bombs the game would end quite quickly. The problem is that at least in the game I played if you took more than three cards you were very likely to draw a bomb card. I would say that close to 75% of turns ended with a player drawing a bomb. Players then started to just bank their cards whenever they even had a small amount of fruit. This really killed the risk taking aspect of the game.

In addition to there being too many bombs, I think the banana cards are overpowered. When the card that gives you an extra turn is easily the weakest banana card, that shows how powerful they truly are. The most powerful card probably has to be the steal a fruit card. This card is so powerful because you can either steal a five fruit card from another player or you can take a fruit of a type that you currently don’t have. This card is so powerful that it was the reason both players ended up winning their respective games. The avoid one bomb card is really powerful as well because it essentially allows you to keep drawing cards until you draw a bomb card with no risk of losing your cards.

The final complaint I have with the game is that it is not a particularly interactive game. Essentially you complete your turn and then wait until it is your turn again. You end up sitting around quite a while waiting for the other players to complete their turn. Since there is no strategy to the game you can’t waste the time planning either.

Overall the components are what you would expect from a typical card game. The cards are made of the the typical card stock. I thought the artwork was decent. The cards for the most part are pretty simplistic which makes them easy to read and understand.

I wasn’t expecting much from the Fruit Ninja card game. While it is far from a great game, it is not terrible either. It is pretty much your basic press your luck game. I liked the cutting the deck and the various risk level mechanics. I thought the game had too many bomb cards though and the banana cards were too overpowered. The game also had too much downtime where you pretty much have to wait for the other players to complete their turn.

As far as recommendations, if you don’t like press your luck games you won’t like the Fruit Ninja card game. If you really like Fruit Ninja you will probably like the game. For everyone else it is a toss up. There are much better games but at least at the time of the writing of this review the game is dirt cheap. If you can find the game for cheap you could do worse.

Disney+: The Complete List of Films and TV Shows Available on Launch Day