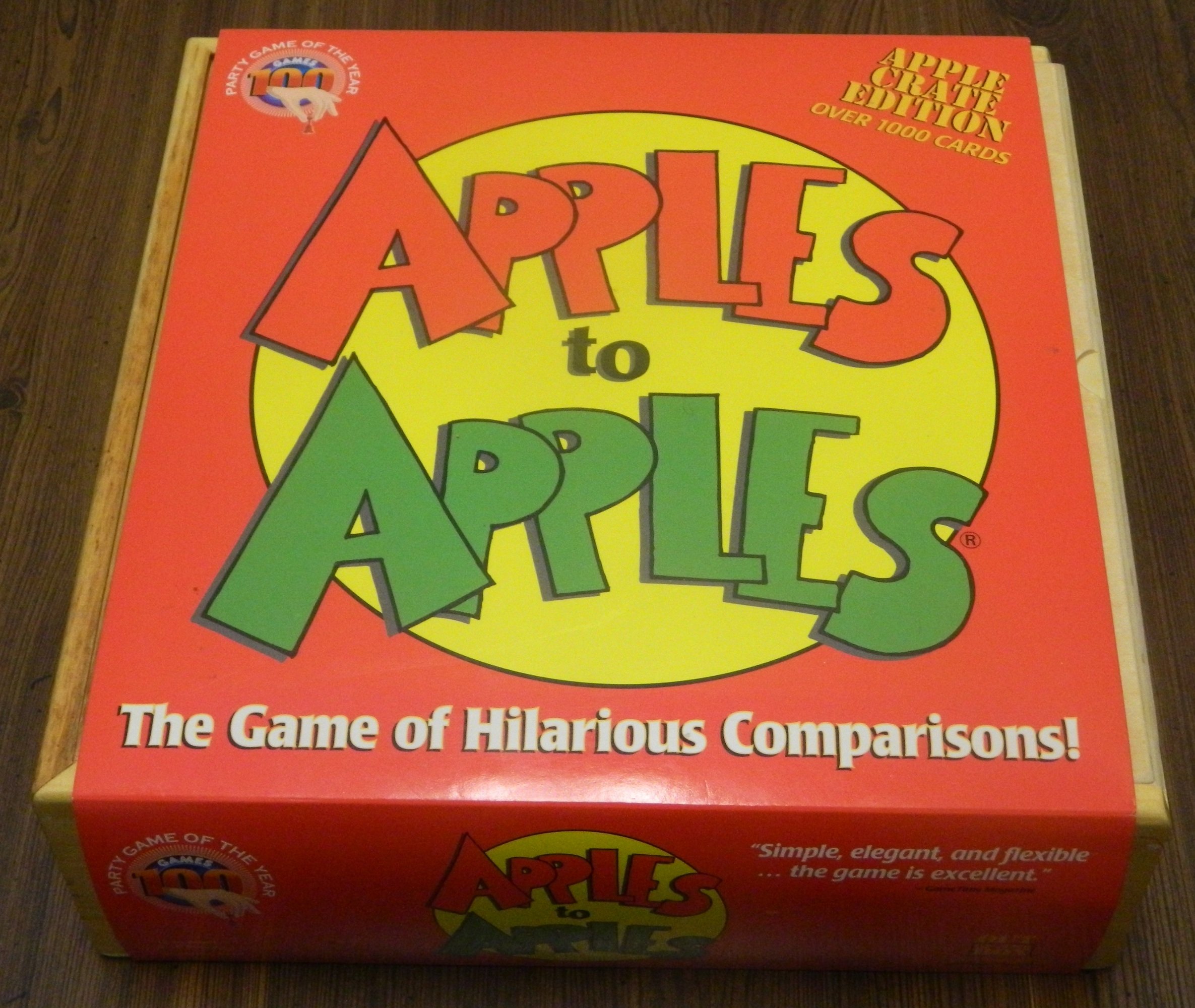 Apples to Apples is a very fun 1999 party game from Out of the Box Games that is very similar to Cards Against Humanity, but much more family-friendly (and came ten years before it). The object of the game is to select a card from your hand that you think best represents the card played by the judge and be the first to win the required amount of rounds (which varies based on the amount of players).

Apples to Apples is a very quick and easy game to play. The game begins with the selection of the first judge, who then deals seven red apple cards face down to each player (including him or herself) to start the game. In each round, the judge picks a green apple card (which are always descriptive adjectives and adverbs like honorable, ridiculous, or extreme), reads the word out loud, and places it face up in the middle of the table.

Except for the judge, all of the players look through their hand of red apple cards (which are usually people, places, animals, events, or objects) and try to pick out the card that best represents the green apple card. Players can use any reasoning they want and are allowed to play to the judge or try to make them laugh. Both are actually encouraged and depending on who you are playing with, creative reasoning or funny responses might actually win more rounds than logical answers. When a player has chosen the best card, they place it on the table face down.

Players must choose quickly since the rules have some penalties for indecision and rewards for quick thinking. If you are playing with four or five players, only the first four red apple cards placed on the table will be judged and players may play up to two red apple cards from their hand (so if you don’t think quick, two players could each lay down two cards and your card won’t even be judged). Players attempting to play two cards must place them down one at a time. If you are playing with six or more players, the last red apple card played will not be judged and is returned to that player’s hand.

After all players have played their red apple cards, the judge mixes the submitted cards up (so they don’t know who played which card), turns each of them over, and reads them out loud. The judge then picks the card they think best represents the green apple card and awards the green card to the player who played it. Each player keeps all the green apple cards they have won to keep score.

After the winning card is selected, the judge gathers all of the red apple cards played during the round (including the winning card) and discards them into the crate. After that, a new round of Apples to Apples begins with the player to the judge’s left. The next judge deals enough cards to each player to bring them back up to seven cards in their hand. Play continues in the same manner until a player has earned enough green apple cards to win the game. The amount needed to win depends on the number of players. Out of the Box recommends the following: four players = eight cards, five players = seven cards, six players = six cards, seven players = five cards, and eight to ten players = four cards. However, Apples to Apples is a very flexible game and you could easily just set a time limit and play as many rounds as you can get through (or just play until you get bored of the game).

There are a few special cards in the game. First of all, some of the cards say “My _____” (my family, my body, etc.). These should be read from the judge’s point of view (not the player playing the card). There are also both red and green apple cards that say “create your own card” (three green and seven red ones). These cards are meant to personalize your game a bit. You can either create your own cards before the game begins or just have the owner write their own answer on the card (though obviously the judge will know who played it since it will be hard to keep it secret).

Out of the Box also gives some suggestions for some Apples to Apples variants (and I have a suggestion in the my thoughts section of this review). “Apple Turnovers” is the main game played basically in reverse. Each player is dealt five green apple cards and the judge turns over a red apple card. Players play their green card that best describes the red apple card, the judge picks the best one, and gives them the red card.

“Baked Apples” is a variant that is in my opinion the way the game should be played. In this variant you just ditch the whole quick play rule and allow everyone except the judge to play a red apple card even if it takes them a long time to think. I personally think the four and five player game penalty for slow play is incredibly stupid (the six or more player one isn’t too bad though) since each round is very quick anyway. I don’t think a player should be allowed to play two cards in a round and I don’t think someone should be penalized for being a little bit slower. This is actually the way I play a normal game of Apples to Apples.

Finally, there is “Crab Apples” where the judge is actually supposed to pick the red apple card that is LEAST like (or the complete opposite of) the word on the green apple card. I’ve never tried it but I imagine this really increases the humor of the game (and probably also makes it a bit raunchier).

Apples to Apples is actually one of the most heavily played games in my collection. It is easily one of my favorite party games, if not my absolute favorite. The game is very quick, easy to play, and surprisingly funny. While everyone loves Cards Against Humanity, Apples to Apples came before it and is much more family friendly and more my type of game. While the game can sometimes get a little bit inappropriate or offensive (but only if you want to play it like that), it is a game you can definitely play with your family. However, you might want to sift through the cards and take out cards that could get slightly inappropriate (like Saddam Hussein, Dr. Kevorkian, or Skinheads) or celebrities or other cards your children might not be aware of. The beauty of Apples to Apples is that you can play the game two different ways, you can be funny and even slightly offensive like Cards Against Humanity or play a more family friendly (but still very fun) version.

The main reason I play Apples to Apples so often is that it is very easy and quick to play, yet still incredibly fun. The game is particularly fun if you play with people who don’t always have to be super serious gamers. If you play with people who will play a card just to make a joke, this game can make you laugh out loud. Since the game is very flexible (you can easily just ignore the rules and play until you run out of time or get sick of it), it makes for a great appetizer game (a game you play before or after your main game of the night). However, be aware. Apples to Apples is very addicting and you could easily play a three-hour game and run out of time for your main game.

(which uses picture cards instead of word cards, so basically Dixit), Sour Apples to Apples

(which adds a spinner that the player with the worst answer spins), Bible Edition

I play Apples to Apples a little bit differently than the rules say. First of all, I ditch the four or five player game penalty for not laying your card down fast enough. More importantly, I always play with the following rule. In each round, a random red apple card from the deck is thrown in with the cards submitted by the other players. While I added this rule mostly just to add some humor to the game, sometimes the random card will actually be a surprisingly good choice. For every hilarious but easy to spot random card (when we were playing cards for the green apple card “flirtatious,” Saddam Hussein was the random card thrown in which made me laugh for at least a minute straight), there’s actually a reasonable submission that sometimes even gets picked. In my most recent game (we played for over two hours), the random card actually won nine rounds. Considering the last place player only won ten rounds, that’s pretty darn good for random selection. I highly recommend this rule since the random card will either be funny (but easy to spot) or actually competitive, giving the other players a run for their money. Either way, this is a good addition.

The only problem with the game, which in my opinion isn’t even a problem at all, is that serious gamers might be put off by the luck factor and lack of much gameplay. In all honesty, the game is extremely luck-based and pretty much comes down to the cards you get and which green apple cards are selected. The winner will almost always be the one who keeps getting the perfect card to play for each green apple card. However, the game more than makes up for it in humor and fun factor. That’s what most people are looking for in a party game anyway.

Apples to Apples is easily one of my favorite party games of all-time. The game is easy to learn, quick to play (unless you get addicted and can’t stop playing it), extremely fun to play, and very funny. The game comes with plenty of cards and because of the gameplay is pretty much infinitely re-playable. Toss in a very fair price (and the fact that the game seems to be relatively easy to find at thrift stores at least in my area) and you have one of the best values in the world of board games. Apples to Apples is highly recommended for all fans of casual and party games.