One of the more popular types of board games is the dexterity game. Made popular by games like Jenga, the mechanic of adding pieces to a stack that is getting more and more unstable has been utilized by many games (several that have been reviewed on this site). While I have nothing against the stacking genre of board games, the genre does have issues with originality. The only difference between a lot of these games is the shape of the pieces that you stack. Today I am looking at another of these stacking games which is called Stacrobats where you stack clowns/acrobats. Does Stacrobats do anything to help itself stand out among the many other games in the genre? Unfortunately the answer is no. 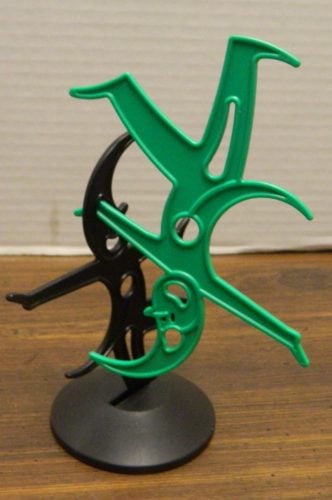 The green player has played their first piece. 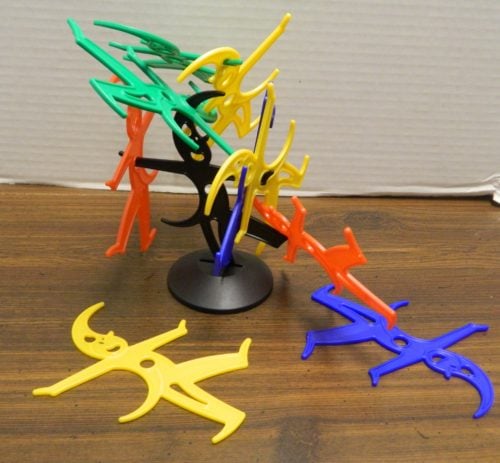 When the last player played a piece they knocked off two of the pieces. That player would have to pick up these two pieces and add them to their stack of pieces.

The first player to get rid of all of their stacrobats wins the game.

To get right to the point, Stacrobats is another extremely basic stacking game. You have probably played a stacking game at some point in your life where each player takes a turn adding a piece to the stack hoping not to knock down the stack. If you knock down any pieces you have to pick them up and place them in future turns. Whichever player gets rid of all of their pieces first wins the game. If you have played a game like this in the past, you have basically already played Stacrobats.

While there is nothing inherently wrong with this mechanic, the problem is that Stacrobats does nothing new with it. There have probably been at least a hundred other board games made with this exact same premise. Some of these games try to do something new while others are content with offering nothing new other than the shape of the objects you use. Stacrobats is in the later category. While Stacrobats is not a terrible game, when you are in a genre that has so many games in it you need to do something new in order to stand out. Stacrobats fails to do that.

This leads to the other thing that determines whether you will win Stacrobats, turn order. Between all of the players that are at least decent at dexterity games, the player that gets to play first has a distinct advantage in the game. In most games of Stacrobats there will likely be two or more players that knock over no pieces in the entire game. Whichever of these players gets to play first will then end up winning the game.

The other reason why turn order is so important is that a player’s fate depends quite a bit on the other players. While a player could end up playing a piece that makes the tower really unstable for the next player, the bigger problem is when a player knocks off some stacrobats. Since this will leave gaps in the tower it makes it really easy for the next player(s) to place their next piece. Whoever plays after the worst player has a built in advantage in the game. While it might not be a huge advantage since it is pretty easy to play all of your pieces, it still gives some players an advantage over other players.

I think the biggest problem with Stacrobats though is that the game really needed more rules for how you can add your stacrobats to the tower. With basically no rules all of the players will just place their next piece in the safest spot in the tower. If there is a safe space in the tower several players in a row will place their piece in the exact same place as the previous player. The only way to stop this would be to add house rules that prevent players from playing a piece in the same spot that a previous player used.

With regards to the components, you basically get what you would expect. The pieces are made of solid plastic and are somewhat detailed. There is nothing particularly special about them though. One complaint I do have is that I think the base for the game is too short. With it being so short it is hard to place pieces at the beginning of the game so they don’t touch the table. If the base was just a little taller I think players would have more choices which would improve the early portion of the game.

I don’t know exactly what to say about Stacrobats. It is not a terrible game but it is not very good either. The biggest problem with the game is that it does absolutely nothing new with the genre. If you have played one of these stacking games before, you have played Stacrobats just with different pieces. I honestly can’t think of a single thing that Stacrobats does that I haven’t seen done in at least five other games. It is too easy to stack pieces in the game which means that luck and turn order have too big of an influence in the final outcome of the game.

If you don’t have any young children I really can’t recommend Stacrobats since while it doesn’t do anything terribly wrong, there are significantly better stacking games that actually do something original. If you have young children though Stacrobats may be worth picking up if you can find it for a couple dollars.

If you would like to purchase Stacrobats you can find it online: Amazon