How to Play Pictureka! Kubes

Pictureka! Kubes Game consists of four different games. Each game has its own rules but there are some rules that the games share in common which are as follows: 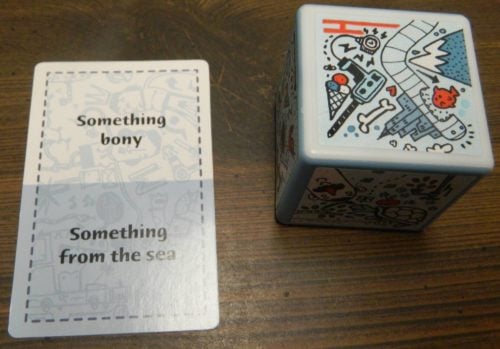 The players are looking for “something bony”. This player found a bone on their card so they will take this mission card.

Randomly lay out the cubes on the grid. 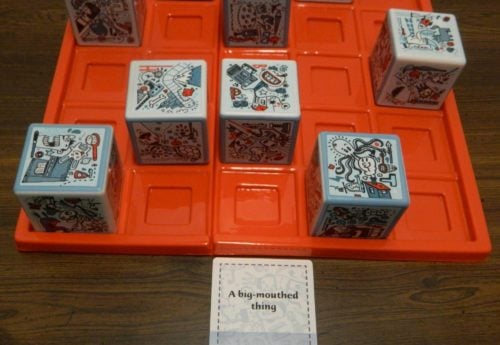 For this round the players are looking for “a big-mouthed thing”. Players could point towards the person on the middle cube to claim the mission card. 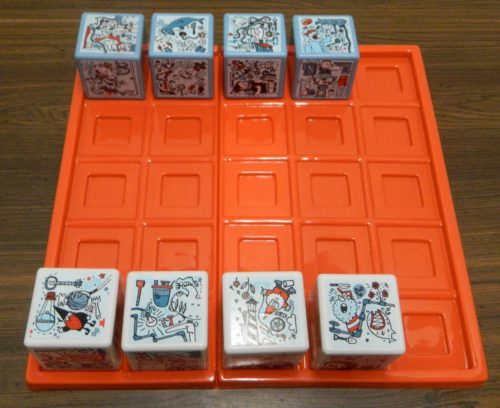 Teams take turns flipping over the next mission card. When the mission card is flipped over, each team looks at their own cubes trying to find a picture that matches the mission. Players may not touch any of their cubes until they find a matching picture. They can move around the gameboard to look at all of the faces of their cubes. When you find a matching picture shout Pictureka! If all of the players agree, the team who found the picture can move the cube that features the picture forward one space. 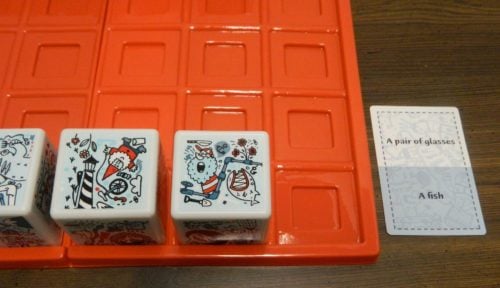 For this round the teams needed to find a fish. This team found a fish on their right cube so they can move that cube forward one space. 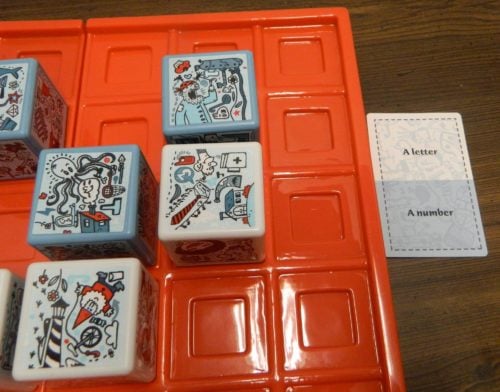 The white team was the first to find a number on one of their cubes (the right cube). As the blue cube is blocking their path they can jump over it for their movement.

The first team to get all four of their cubes to the other side of the board wins the game. 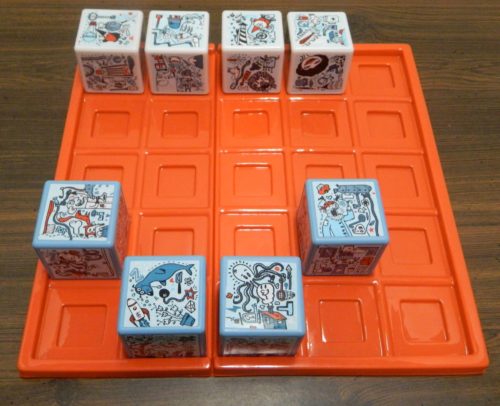 The white team has gotten all of their cubes to the other side of the board so they have won the game.

Lay out all of the cubes in the middle of the gameboard. Bump ‘n’ Slide is played by one player at a time. The player to the left of the current player is in charge of laying out cards and keeping track of the time. Each player will get 30 seconds to try and get as many cards as possible. 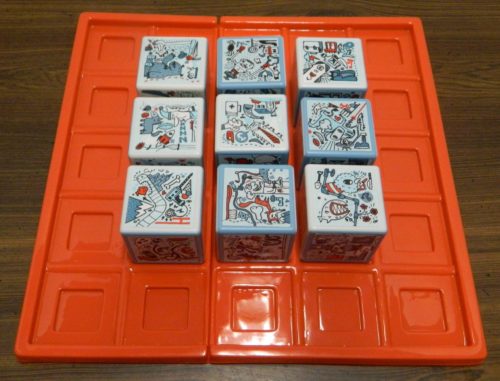 The first mission card is flipped over and the timer begins. The current player searches all of the cubes trying to find a picture that matches the current mission. The player can turn the grid but cannot pick up any of the cubes. Instead of picking up the cubes, players can push a line of cubes in any direction on the grid. When a player spots a matching picture, the card is set aside and another card is flipped over. 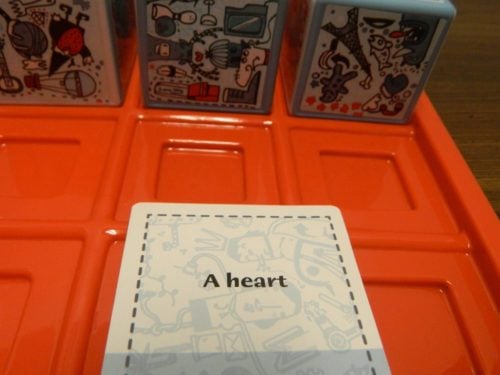 This player is looking for a heart. When they spot the heart on the cube in front of the card they will flip over the next mission card.

My Thoughts on Pictureka! Kubes

Having played most of the games in the Pictureka! series of games, I would say that I had a pretty strong opinion of the series before playing Pictureka! Kubes. While there are things that I liked about the series, I was always left a little disappointed by the series. I really like the premise behind the series as I was a big fan of the Where’s Waldo? series of books growing up. The idea of searching through a bunch of random items looking for a specific item has a lot of potential for a board game. This mechanic has already been used successfully in a game like Scrutineyes. Despite loving the game’s premise the Pictureka! franchise has never been as good as I was hoping it would be. I have had some fun with the games but they get repetitive rather quickly.

I was hoping that Pictureka! Kubes was going to change my opinion as it added a couple interesting new mechanics. While some of the additions add some interesting ideas to the franchise, for the most part Pictureka! Kubes is the same as the rest of the series. The players are still competing to be the first player to find an item that matches the current mission. The first person to acquire a certain number of cards wins the game. This is fun for a while but it can get repetitive pretty quickly.

As the basic premise of the game remains unchanged, Pictureka! Kubes shares one of the biggest problems of its predecessor. Just like with the rest of the series there are going to be issues with players arguing about whether something fits the mission. As most of the missions are open ended, players are going to have different interpretations about what should and shouldn’t count. If players are stubborn this could lead to arguments. While this didn’t seem as prevalent in Kubes as the rest of the series, it is still an issue. Basically the only way to prevent this from becoming a real problem is to have all of the players agree that the game shouldn’t be taken seriously so players are more willing to agree on whether an item should count or not.

It might not be the most noticeable difference but the fact that Pictureka! Kubes eliminated the different card colors slightly improves the game in my opinion. While I usually like variety I thought the different colored cards in Pictureka! didn’t really add much to the game. They basically tried to come up with different ways to use the “Where’s Waldo?” mechanic and yet they basically all played the same. One of the mechanics was even broken in the original Pictureka!. While eliminating the different colored cards from the game took out a little variety, it simplifies the game and keeps the focus on what Pictureka! does best.

Let’s begin with Grab ’em. Basically Grab ’em takes the red cards from the second edition of Pictureka! and turns them into their own game. Each player is given one or two cubes which they can use to find the current item. As the pictures are on cubes players have to twist and turn their cubes to find the item. While the cubes don’t drastically improve this game I think they make it a little more challenging as you have to twist and turn the cubes to find items. This game is moderately fun as it is kind of fun to race the other players to find an item on one of your cubes. It gets repetitive after a while though.

The second game in Pictureka! Kubes in Hanzoff!. Basically Hanzoff! plays the same as the normal game except you can’t see all of the faces of each cube. Each player can see between one and three of the faces of each cube without moving at all. To see the other sides that aren’t covered up you have to move around the table or lean over the gameboard. Just like with Grab ’em this mechanic adds a little to the game but I don’t know if it adds enough to really justify adding the cubes to the game. Just like with Grab ’em you can have some fun with HanzOff! but it gets a little repetitive after a while.

The third game in Pictureka! Kubes is Side 2 Side. In Side 2 Side the players separate into two teams and try to get their cubes to the other side before the other team. I like to think of Side 2 Side as Pictureka! meets Checkers. Basically the first team to complete the mission gets to move the cube that they found the item on forward one space. The Checkers comparison comes from the fact that you can jump over the other team’s cubes (straight instead of diagonal like Checkers). Heading into the game I thought it was going to differentiate the most from the original game. The board mechanics don’t really come into play that often though as the game’s outcome still comes down to who can find the items first. The only times the board comes into play is determining which cube you should focus on. When one of your cubes are next to the other team’s cube you want to try to use that cube as you gain a free space by jumping over the other team’s cube. The other way it changes the game is that it allows players to ignore their cubes that have already made it to the other side of the board. Otherwise Side 2 Side plays like pretty much every other Pictureka! Game.

While playing Side 2 Side one of the unique problems in Pictureka! Kubes starts to surface. As players can’t touch the cubes, the only way to see some of the sides of a cube is either to walk around to the other side of the table or to hover over the board hoping to get a better look. This creates problems as two or more players may try to look at other sides of the cubes at the same time and their heads could get in each others way. With players looking over the top of the cubes, other player’s vision will also be obscured. With overly aggressive players this could create some problems as players bump heads or try to push each other out of the way. Unfortunately I don’t know if there really is a way that this issue can be fixed unless there are rules put in place where you can’t get in the other players way.

The final game you can play in Pictureka! Kubes is Bump ‘n’ Slide. Bump ‘n’ Slide is a game where players try to match as many missions as they can in a given time period. Unlike the other Pictureka! games, Bump ‘n’ Slide has players taking turns trying to find matching pictures. The only thing that is unique about the game is that you can slide the cubes around the board in order to see more faces of the cubes. I found this game to be solid but nothing special either. I appreciate that it introduces a potential single player mode to the game but the sliding mechanic doesn’t really add a whole lot to the game.

The component quality for the game is pretty typical for a Hasbro game. I have always kind of liked the art style for Pictureka! and it is no different for Pictureka! Kubes. The cubes are of a decent thickness and they slide apart pretty easily which allows you to change the cubes from time to time. The board is made of pretty cheap plastic. The biggest problem that I had with the components is the number of cards included. The game comes with 40 cards. With each card having two missions that means you can play 80 rounds before you have to repeat a mission. That might sound like a lot but you will go through those missions quicker than you would expect. While you could just replay the same missions over again, I think Hasbro could have included more cards with the game.

Should You Buy Pictureka! Kubes?

If you would like to purchase Pictureka! Kubes Game you can find it online: Amazon

Hands Down Board Game Review and Rules
Click here to cancel reply.