How to Play Guess Who? Mix ‘n Mash

Each player takes a character checklist, a stand, and something to write with. Separate the mouth, eye, and head cards and shuffle each group individually. Each player randomly draws one card from each stack without looking at the picture side of the card. Place the three cards in the frame facing away from you to create your character’s face. At no time in the game can you look at your own character’s face. The player whose birthday is coming up next gets to start the game. 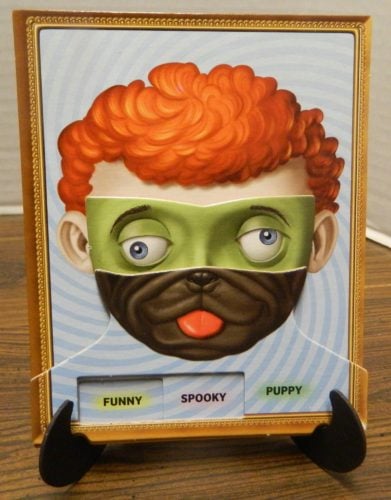 This player created a funny spooky puppy face which they will have to guess to win the game. 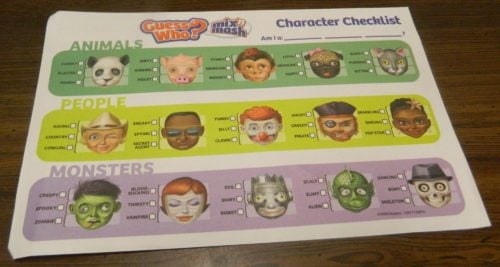 When everyone is finished, mix up the order of the faces so the Director doesn’t know who created each face. The Director will then choose the face that they think best matches the challenge. The player that created that face earns a point.

Once everyone has been the Director once, the game ends. Whichever player earned the most points wins the game. If there is a tie, the player with the closer birthday breaks the tie.

Being a spinoff game of Guess Who? it shouldn’t come as much of a surprise that Guess Who? Mix ‘n Mash shares a lot in common with its’ inspiration. The basic mechanic is still asking yes or no questions in order to narrow down the identity of your character. The main difference between the two games is that instead of just having to figure out one piece of information, you need to figure out the three characteristics of your character. Guess Who? Mix ‘n Mash basically ends up playing like a more advanced version of Guess Who?

While I wouldn’t consider this to be a problem, you have pay more attention to detail in Guess Who? Mix ‘n Mash than you do in the original game. There is more information to wade through in the game which means you have to be quite a bit more specific when you ask questions. If you aren’t clear in what you are asking the other players could pretty easily misinterpret your question and give you misleading information. While this could lead to more issues of players giving incorrect information, it is not a big issue since you likely will have more than one player confirming every answer to a question so mistakes should be less likely.

For the most part I would say that Guess Who? Mix ‘n Mash is pretty similar in difficulty to the original game. The game is pretty simple overall since you basically just ask yes or no questions. Using the answers you receive you can narrow down the possibilities for your character. I would say Mix ‘n Mash is probably slightly more difficult than normal Guess Who?. This is mostly due to there just being more information that you have to figure out in Mix ‘n Mash.

Other than having to work through more information, the biggest addition to Guess Who? Mix ‘n Mash is that the game supports four players instead of two. The fact that Guess Who? only supports two players has always been a problem in my opinion. The game could have easily supported more players and yet it didn’t. While you could easily purchase two copies of the game to support more players, I don’t know why the game never included four gameboards to begin with. Guess Who? Mix ‘n Mash shows that a Guess Who? game can easily support four players and still be enjoyable.

Just like with the original Guess Who? though, Guess Who? Mix ‘n Mash shares the same major problem. For those of you who haven’t checked out my How to Win Guess Who Within Six Turns post, the Guess Who? franchise starts developing a problem if you start to really think about the questions you ask. In Guess Who? the key is to ask complex questions that will eliminate close to half of the options no matter what answer is given. While some people consider using complex questions in Guess Who? cheating, I see it as strategic way to play the game and totally within the rules of the game.

The best strategy to implement in the game is still basically the same as normal Guess Who? though. To maximize your questions you likely want to eliminate a third to half of the remaining body parts with each question. The best strategy seems to be to narrow down if your creature has animal, people or monster parts and which parts belong to each category. If your creature doesn’t have any parts for one of the categories you can cross off every part from that category. You then ask questions that further narrow the options for each category. While it will take longer than normal Guess Who? if you are methodical you can still solve your identity pretty quickly.

While this is a problem for serious/methodical players, it isn’t going to be a big issue for most players. If you don’t care about maximizing every question you won’t run into this issue at all. Guess Who? has always been a game that works better when you don’t put too much thought into your moves. Going in with a strategy will make you more successful in the game but it also takes some of the fun out of the game. While I think Guess Who? Mix ‘n Mash is a solid game for adults, I think children will love the game since they won’t over analyze every question. I also think children will really like creating the different creatures since some of the creatures can be quite strange/funny.

While I didn’t personally try the Wacky Faces alternative game, I give the game credit for trying to come up with another game that uses the components included with the game. Basically the mode kind of feels like an Apples to Apples style game except that the judge gets to come up with their own prompt. The main reason I didn’t try the mode is that it seems a little too silly for adults. I can see the mode working quite well with children but I think there are much better Apples to Apples style games for adults.

Basically I would say the Guess Who? Mix ‘n Mash is better than normal Guess Who? in every way other than nostalgia. Guess Who? created some fond memories since I played the game a lot when I was a kid. I don’t see Guess Who? Mix ‘n Mash ever creating that nostalgic feel but it is otherwise a better game. That is mostly because it provides more challenge due to the amount of variety that is included in the game. Rarely will two games ever be the same. With more potential options your line of questioning is also not as straightforward which forces you to get more creative when asking questions. Outside of looking for a trip down memory lane, I would recommend playing Guess Who? Mix ‘n Mash before the original Guess Who?

Should You Buy Guess Who? Mix ‘n Mash

If you would like to purchase Guess Who? Mix ‘n Mash you can find online: Amazon