How to Play The Whac-A-Mole Card Game

Put the Whac-A-Mole tile in the middle of the table. Shuffle the cards and deal them out equally to all of the players face down. The youngest player gets to play first.

On a player’s turn they will flip over the top card from their pile and place it on top of their mole pile (pile of face up cards). All future cards turned over will be placed on top of the other cards in the mole pile. After playing a card play passes to the next player clockwise.

If a card is turned over and it matches the color of the top card in another player’s mole pile, the players who have the matching colored cards race to be the first player to slap the Whac-A-Mole tile in the middle of the table. The first player to slap the tile gets to take all of the cards from both matching players’ mole piles. These cards are put on the bottom of the player’s pile of cards. 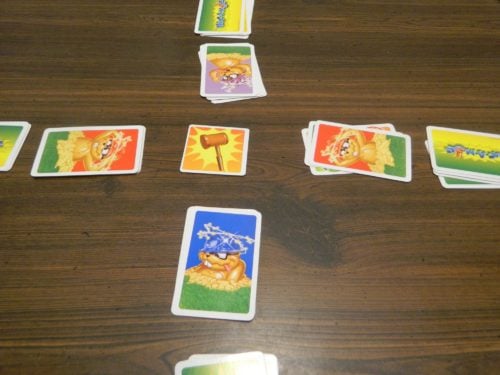 The left and right player both have a red mole in front of them. Whichever hits the hammer tile first gets to take the tiles in both piles. 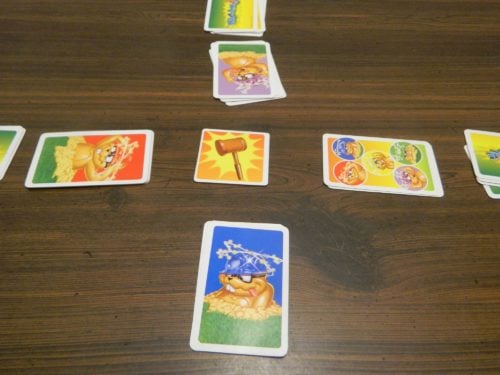 The player on the right has played the wild card. The first player to slap the tile in the middle of the table gets to take all of the face up cards.

If a player accidentally slaps the Whac-A-Mole tile when they weren’t able to, they discard two of the cards from their pile removing them from the game.

The game ends when only one player has cards remaining. The player who still has cards wins the game.

My Thoughts on the Whac-A-Mole Card Game

After reading the how to play section, Whac-A-Mole probably sounds like a lot of other card games. The basic premise of flipping over cards and then having to slap or grab something when cards match has been used in a lot of other games. Just off the top of my head the mechanic is used in Jungle Speed, Slap Jack, Snorta and Tutti Frutti. That is just a small percentage of the games that have used a similar mechanic as I have played several others that I just can’t think of off the top of my head. With there being so many games with this mechanic, to stand out a game has to do something unique. This is a problem for the Whac-A-Mole Card Game since it doesn’t really do anything new that you can’t find in other games.

Since everyone has probably played one of these type of games at some point, I don’t see the point in spending time talking about the main mechanics of the game. Instead I will talk about what is different about the Whac-A-Mole Card Game. The one somewhat unique mechanic in the game is that in addition to matching another player, there is a wild card that matches everyone. This can create a chaotic rush as everyone tries to slap the tile first. I like that the mechanic adds something to the game but it doesn’t drastically change the game. The Whac-A-Mole Card Game is still just a speed game where players need a fast reaction time to slap the tile before the other players.

While the components in general are what you would expect out of a Mattel game, I think the game could have used some more cards. 36 cards are just too few in my opinion. Just one or two mistakes can basically eliminate you from the game. I am guessing that the game limited the number of cards in order make the game shorter. While these type of games should be short, I think it goes too far in The Whac-A-Mole Card Game. There are so few cards that if a player gets a pretty big lead in the game, it will be very hard for any other player to ever catch up.

This is probably partially due to my group getting a little too enthusiastic in speed games, but it can actually hurt playing The Whac-A-Mole Card Game. Slapping the tile in order to claim the cards can actually hurt quite a bit. You could hold back and not slap the tile so hard but by holding back you might not hit the tile before another player. Several players are going to be going for the tile at the same time as well so there is a chance that a player could get slightly hurt if two players slap the tile at the same time.

I didn’t really care for the game but I will admit that the game was mostly designed for younger children and families. The game has a recommended age of 5+ and that seems about right. There aren’t many rules in the game so I don’t really see children having any issues with the game. The game is simple enough that children should be able to play it themselves or I could see adults having some fun playing the game with their children. I don’t really see the game working well with adult audiences though. It is just too simple and there are other games that have the same main mechanic and yet have additional mechanics that make the game more interesting.

Should You Buy The Whac-A-Mole Card Game?

I wouldn’t say that The Whac-A-Mole Card Game is terrible but I think it has a very specific target audience. The game shares a lot in common with a lot of other speed games. Outside of a wild mechanic it doesn’t do anything that hasn’t been done in any of these other games. Add in the simplicity of the game and there are just better options out there for adults. The game’s simplicity will appeal to younger children but I don’t see it working that well with older children and adults.

If you would like to purchase The Whac-A-Mole Card Game you can find it online: Amazon