No matter how many board games you have played, you will occasionally run into a game with a truly unique concept. When I saw Captain Clueless in the thrift store I knew it was going to be like nothing I had ever played before. A game where you play as a blindfolded captain that is guided by your teammates just sounded like a interesting concept for a board game. I was just hopeful that the game could live up to its’ premise and wouldn’t end up being a disappointment. Captain Clueless might not be a perfect game but it is a truly unique experience.

How to Play Captain Clueless: Lost in the Caribbean

Divide into two teams with all of the players from each team sitting on the same side of the table. Place the gameboard in the middle of the table along with the sand timer and eraser. Each team takes a blindfold and dry erase marker of the same color. Shuffle the cards and give one card face down to each team. The rest of the cards form a draw pile. Whichever team has the player who lost their keys most recently starts the game.

The current team chooses who will be their first captain (this role rotates every turn). The captain and the rest of the team look at their card. The location shown on the card is the first destination for the team. All of the players look for the location on the gameboard and then the captain puts the blindfold over their eyes. One of the players on the team hands the marker to the captain and moves the marker to the start space. 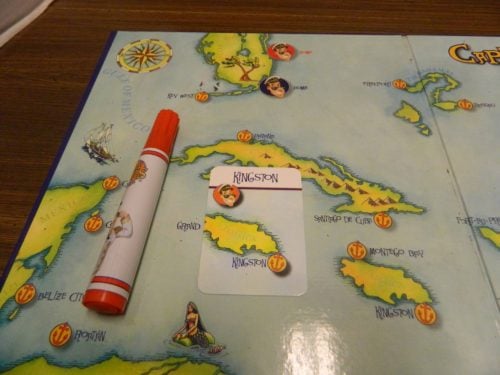 The red team has to draw a line from their home to Kingston.

The round begins when the other team turns over the timer. The captain starts drawing a path from their starting location. Since the captain is blindfolded they won’t know where they are drawing. The captain’s teammates can help the captain navigate by using words to describe how to pilot the ship. Players can use any words they want but are limited in how many words they can use in the round. 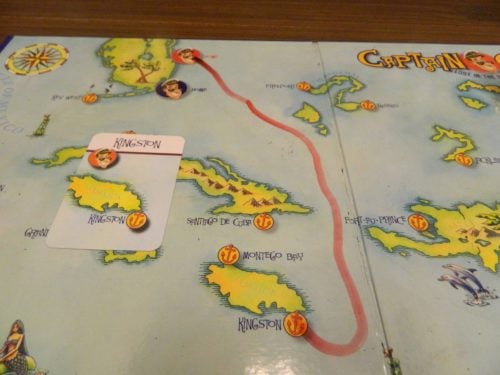 Several things can stop a team from reaching their destination on a turn though. If a player’s line runs into land or another object on the board (not letters), the team’s turn ends immediately. A team’s turn can also end if the marker is removed from the board, the team uses too many words for the round, or the timer runs out. When a captain fails to reach their destination, on the team’s next turn they will start from where their previous turn ended as they continue towards their destination. 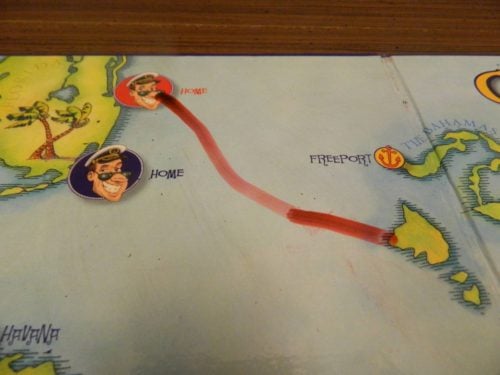 The red team has hit land so their current turn ends. On their next turn they will have to start from the area where they hit land.

Once a team has reached three destinations they turn back towards their home space. The first team to return home wins the game. 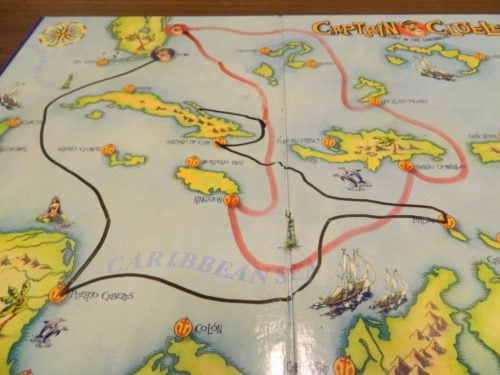 My Thoughts on Captain Clueless: Lost in the Caribbean

The main reason why I picked up Captain Clueless from the thrift store is the fact that it looked like a truly unique experience. I have played a lot of board games and yet have never before played a game quite like Captain Clueless. While the game seems to have taken its’ main gameplay mechanic from VOC! Founding The Dutch East Indies Company, I have to give the designers credit for taking the most interesting mechanic from that game and developing a whole game around it.

Basically the premise of Captain Clueless is that you are playing a clueless captain that has no idea what they are doing. This is accomplished by putting a blindfold on the captain and then having them navigate the Caribbean without crashing into anything. The only help the captain gets from their teammates is a couple verbal cues to guide them in the right direction.

Being a family game it makes sense that Captain Clueless is easy to pick up and play. The game has a recommended age of 8+ but I think younger kids could play the game. Younger children might have some problems with the directional aspect of the game. I don’t think it would be that hard to tweak the rules to accommodate younger players though. You could give younger players more words which will make it easier for them to make it to their destination. Captain Clueless is the perfect style of family game as it is accessible to children and yet is still fun for adults. Captain Clueless is truly a game that the whole family can enjoy.

When you start playing the game most people are probably going to think that Captain Clueless looks really simple. How hard could it be to draw a line between two points? When you are giving directions to the captain it doesn’t seem that hard. When you put on the blindfold though you might be surprised by how big of difference it makes. As the captain you might think you know where you are going but the blindfold makes it really easy to lose track of where you are. The captain has to rely heavily on their teammates in order to stay on course and not run into anything.

While some people won’t agree with me, I found Captain Clueless to be kind of easy at times. Maybe it was just our group but we didn’t really encounter a lot of problems reaching destinations in the game. Most destinations we could reach in one turn and otherwise we easily reached them on our second turn. If you give clear instructions (left, right, up, down) it is pretty easy to make your way without running into anything. If you take your time so your teammates have time to tell you to change directions it is pretty easy to avoid the obstacles. You might not think five or less words is a lot but you can actually give quite a bit of instruction with just a couple words.

While some people might find Captain Clueless to be a little childish, I think it will be hard not to have at least some fun with Captain Clueless. There is just something about the game that is so enjoyable. It is simply fun trying to guide your ship through the Caribbean without knowing where you are going. This is one of those games where the premise might sound ridiculous but it actually works. The game was meant for families with children but adults can still get quite a bit of enjoyment out of it. If your group tends to only enjoy serious game though, Captain Clueless might not be for you.

While my group had quite a bit of fun with Captain Clueless we devised our own house rule that we think improves the game. In our house rule each player will be captain for an entire leg of the journey. The current captain keeps the blindfold on until they reach the next destination. The captain is also never told what their destination is. We found that these house rules make the game more interesting since the captain will have no idea what they are doing. This forces them to rely entirely on the directions from their teammates since they have no idea of where they are headed. These house rules make the game a little more difficult but I also think they improve the game since players won’t already have a good idea of where they are supposed to go.

While there are a lot of things to like about Captain Clueless, the game is not perfect.

Another problem with Captain Clueless is that while I enjoyed playing it, I wouldn’t say that it is a game that you can play for long stretches of time. Personally I only see playing one or two games at a time and then putting the game away for another day. While the game’s mechanics are unique, the game itself mostly relies on doing the same thing every round. The gameplay is fun but I can see it getting kind of boring if you play it for more than 30-45 minutes at a time.

I wouldn’t really consider this a complaint but I think each team should have to visit more destinations in a game. The problem with the journey being so short is that it makes it hard to actually take much of a lead in the game. With only three destinations both teams will either finish on the same turn or the second team will likely only be one turn behind. This might have been a problem except that you can easily add additional cards to your journey in order to extend it. I think five or six destinations would probably be best for the game. A longer journey should improve the game since it should reduce some of the card draw luck. You will have to tweak the word limits to accommodate the extra cards but I think having to visit more destinations will improve the game.

While Captain Clueless can support as many players as you want above four, I think the game is probably more enjoyable with less players. While I haven’t played the game with more than four players, I think four players is the ideal number of players for the game. The reason that I think four players is the ideal number is because it results in two player teams. This means that for every round one player will be the captain and the other player will be giving directions. With more than two players per team the players giving directions either have to agree on who will talk or they will end up talking over one another. If you want to play with more than four players you would be better off buying more dry erase markers and creating three or four teams.

I have some mixed feelings about the components of Captain Clueless. I like the game’s artwork and the quality of the components are pretty good overall. The game includes quite a few destination cards so you likely won’t have to make the same trips unless you play the game a lot. The problem with the gameboard is that there is a large crease down the middle. This can really mess with the blindfolded player so I don’t know why Gamewright didn’t create a gameboard without a crease down the middle. The other problem that I had was with the dry erase markers. The markers don’t always erase that well and the markers dry out pretty quickly so you will likely have to buy new dry erase markers at some point.

Should You Buy Captain Clueless: Lost in the Caribbean?

When I first saw Captain Clueless I had a feeling that it was going to be a good game. The reason that the game interested me was the game’s concept. I have played a lot of different board games and yet have never played a game quite like Captain Clueless. The game’s blindfold mechanics are unique and more importantly fun. If you like silly games you will probably have a lot of fun with Captain Clueless. The game does rely quite a bit on luck though and it isn’t a game that you want to play for hours at a time.

If you are more of a serious gamer who doesn’t’ care for silly party games, Captain Clueless might not be for you. If you don’t mind silly games though I think you could have a lot of fun with Captain Clueless.

If you would like to purchase Captain Clueless: Lost in the Caribbean you can find it online: Amazon