Put the bell in the middle of the table. Shuffle the cards and deal them all out evenly to all of the players. Each player gathers their cards into a pile and keeps them face down on the table without looking at them. The player to the left of the dealer will start the game.

Players take turns flipping over the top card from their pile and placing it on top of their cards that they have already played. Each card played replaces the previously played card by that player. When flipping over a card it should be turned face up away from the player flipping it so they are the last person to see the card. 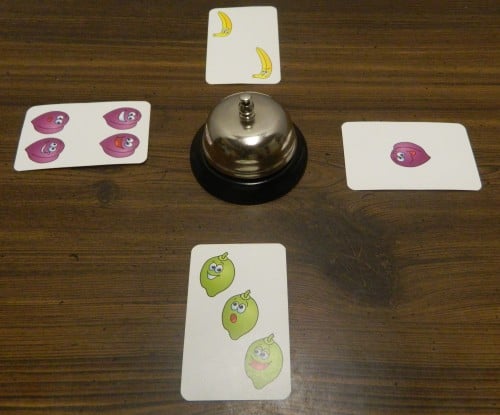 If a player runs out of cards, they are eliminated from the game.

Some versions of Tutti Frutti have an additional deck of cards which include rotten/bruised fruit. These fruits do not count towards the total of their type of fruit. For example if there are four good bananas and one bruised banana, there are only four bananas in play. 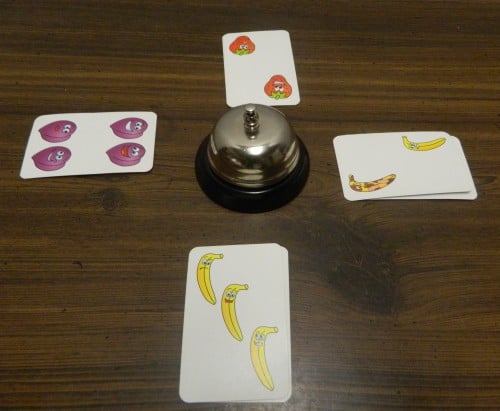 The card on the right side contains a bruised fruit which means there are only four bananas on the table.

There are two ways that players can choose to end the game.

The first way to win the game is to be the last player with any cards remaining.

Otherwise you can play the game like normal until there are two players remaining. The two remaining players play until one player finds a group of five fruits and claims the played cards. The two players then count up their cards and the player with the most cards wins the game.

Originally titled Halli Galli, Tutti Futti is a speed game where players try to find groups of exactly five fruits of the same type and then ring a bell as quickly as possible. I have played a lot of speed games in the past because I like the genre. The problem with the genre though is that a lot of the games are very similar. While Tutti Frutti doesn’t really differ a lot from other speed games, it is still a fun game despite being such a simple game.

If you are looking for a simple game Tutti Frutti is it. Trutti Frutti feels like a combination of the game War with a counting game. Players flip over cards and count up the similar fruit on the cards.The rules take around a minute or two to explain to new players. As long as you can count up to around ten you can play the game.

While Tutti Frutti is really simple, it doesn’t mean that all players will be equal in the game. Like most speed games, reaction time is crucial for the game. If you have a fast reaction time, you will do well in the game. If you don’t have a good reaction time, you will rarely win the game. The game is like your typical speed game where everyone is playing at the same time which can create a chaotic experience. There is a chance for slight injury if two or more players go for the bell at the same time. Long fingernails are going to be your worst nightmare in these situations. If you don’t like fast chaotic games, Tutti Frutti is not going to be for you.

Since it is such a simple game, there is next to no strategy in Tutti Frutti. Other than trying to fake out the other players or flipping your cards over as fast as possible to try and get an advantage over the other players, you really can’t do anything for a strategy since you don’t get to pick which card you get to play. I really wonder what the game would be like if you did get to pick which card you got to play on your turn.

With next to no strategy in the game, turn order becomes quite important. In some cases it seems to be better to be the player playing the card while in most situations it is better to not be playing the current card. If the card is a card with five of the same fruit and none of that fruit is currently on the table, the player that plays the cards seems to have an advantage for some reason. In most other situations though you don’t want to be playing the card that puts five of the same fruit on the table. You are at a disadvantage because everyone else can see the card first and you need to finish playing the card before you can ring the bell. This is especially true in situations where there are exactly five of a fruit on the table but your previous card makes it more than five of the fruit. If you end up covering up your card with any card that doesn’t have that fruit, there will only be five left and the other players are likely to pounce on it before you even can finish playing the card to the table.

Even though the game is really simple and has next to no strategy, I still had fun with the game. It is your typical speed game. It is just enjoyable racing against the other players to beat them to the bell. The game is far from a brain burner but is fun in family situations or with people who don’t typically play a lot of board games. It also works as a game when you just have 10-15 minutes to kill and don’t really want to put too much thought into it.

The rule I might like least in Tutti Frutti is the punishment for ringing the bell when you weren’t supposed to. I don’t like the penalty since it is way too weak. While the punishment is greater with more people playing the game, giving one card to each player isn’t that costly especially when the game is down to two or three players. With two players remaining the penalty is so little that you shouldn’t worry too much about it especially when the piles of cards are getting quite large. I think a better punishment would have been that the player who incorrectly rings the bell is unable to ring the bell again until someone has correctly rung the bell and taken the cards from the table. This means that in two player situations the other player would automatically get all of the cards on the table.

One thing I would highly recommend if playing with adults or older children is to use the bruised fruit cards if they are included with your version of the game. I really like these cards because they add another element to the game. Without the cards you can just simply count up the fruits and know if you should ring the bell. With the bruised fruit you need to also check to make sure that all of the fruit are still good which adds another element that you have to analyze which adds skill/challenge to the game. Unfortunately I don’t think a lot of the versions of the game come with these cards which is a shame because they make the game considerably more enjoyable for adults.

Tutti Frutti is an odd game in that it can be really short or really long depending on the players. Most games are probably going to be short with one player getting most of the cards quickly and knocking out the other players. If all of the players are pretty equally skilled, Trutti Frutti can run into problems where it feels like the game will never end. Players will regularly trade off who wins the cards which means that no one develops a significant lead over the other players. This leads to the game dragging on and on.

This becomes interesting when you debate which of the two endings you want to use for the game. At first I thought the ending where you played until one more set of cards were taken was pretty bad. It felt anticlimactic and just not a good way to end a hard fought game. While I still think this would be the case, I can actually see the merit for this ending because the game could take forever to end otherwise. With only two players this back and forth seems to get even worse since players trade off claiming cards even more regularly.

This issue of length shows one of the bigger problems with Tutti Frutti. While you can have fun with the game, Tutti Frutti isn’t the type of game that you will play for long stretches of time. After about 15-20 minutes the game gets pretty dull since all you do is play cards and count up the fruits on the cards. You can only do this for so long before you get tired of it. At that point you are going to want to put the game away for awhile before you will want to play it again.

Tutti Frutti is a very solid speed game. The game is quick to play and learn. The rules are simple so children and non-gamers will have no troubles with it. If you like speed games you should have fun with Tutti Frutti. The biggest problem with the game is that it just doesn’t stay entertaining for long stretches of time. It is the type of game that you will play for 15-20 minutes and then get bored with and put away for a while.

Where can I find one just like the one you have pictured? That's the exact one I remember playing as a kid but I cant seem to find it. I didn't realize this one was rare?

Can you please list the exact number of cards in the game and what are they specifically, like how many 5 plums cards are there? Would be greatly appreciated.

This is for the 1996 Patch Products version of the game.