On Geeky Hobbies we have looked at quite a few of the board games created by Out of the Box Publishing. While the company is no longer in business, it created a strong catalog of games while it was in business. I have played quite a few of their games and have enjoyed most of them. When I recently found Cloud 9 for cheap I was excited because Cloud 9 is actually one of the highest rated games made by Out of the Box Publishing. After playing Cloud 9 I would have to say that it is one of the best press your luck games that I have ever played.

How to Play Cloud 9 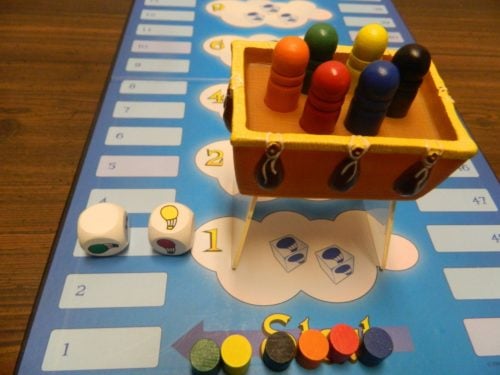 The current player has rolled a blank and a yellow balloon. The player will have to either play a yellow or wild card in order to raise the balloon. 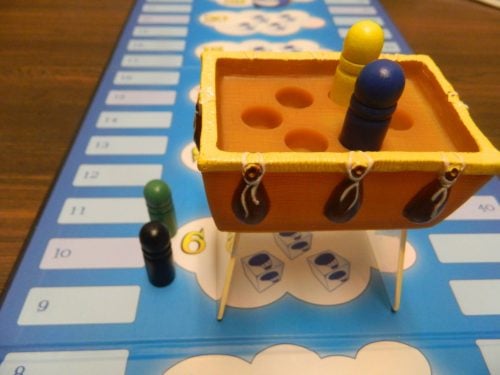 The green and black player have jumped out of the balloon. Both players will score six points. 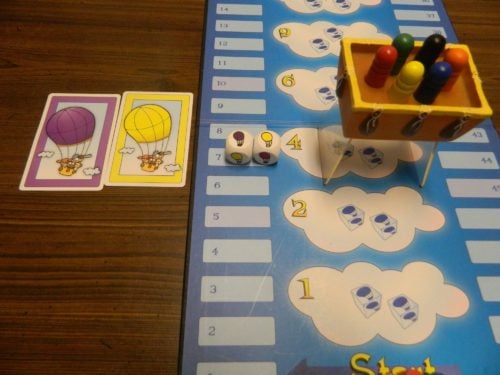 The pilot was able to play the purple and yellow cards necessary to raise the balloon.

If the pilot has a wild card they can play it to cover all of the dice rolled. The pilot is not forced to play a wild card though. 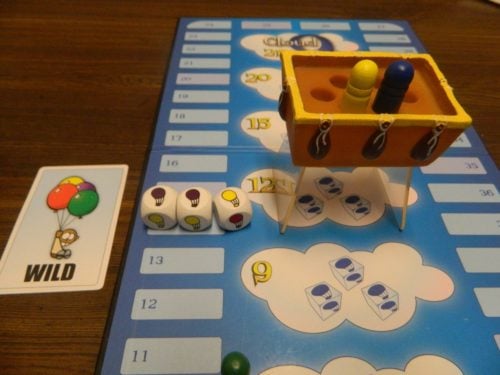 The current pilot has played a wild card which covers the two purple and the yellow balloon that were rolled.

If the pilot is the only player remaining in the balloon, they have the option of continuing their journey or quitting. Before rolling the dice the player has to decide whether to continue or quit. If the player quits they receive the number of points on the cloud they are currently on. If they decide to continue they will keep rolling the dice and playing cards until they fail or decide to quit. 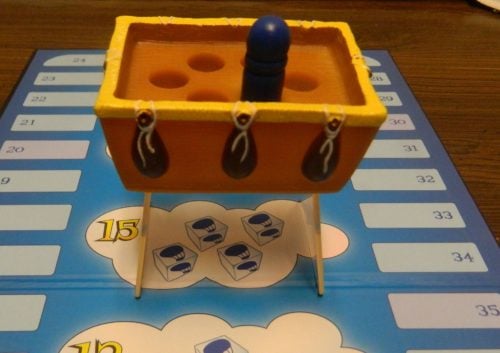 The blue player is the last player in the balloon. They will be the pilot for the rest of the trip. The blue player can choose to stop the trip at any time before they roll the dice.

If the pilot does not have the necessary cards to match what they rolled, the balloon falls to the ground and all of the players left in the balloon score no points for the round. All players put their passengers back into the balloon and a new round begins. 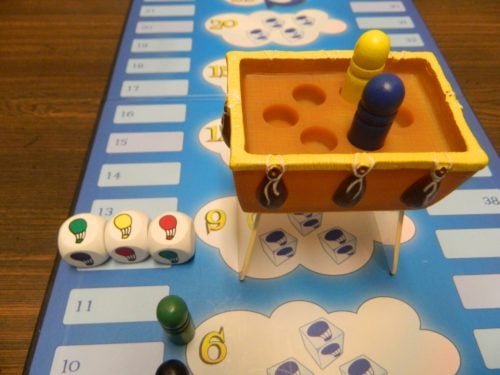 The current pilot doesn’t have a green, yellow, and red card so the balloon is going to crash. The yellow and blue player will score no points.

To begin a new round the balloon is moved to the lowest cloud. All passengers are put back into the balloon. Each player draws one card. The role of the pilot moves to the next player clockwise.

The game ends after a balloon trip has ended and at least one of the players has more than 50 points. The player that has the most points wins the game. If there is a tie, the player with the most cards remaining wins the game. 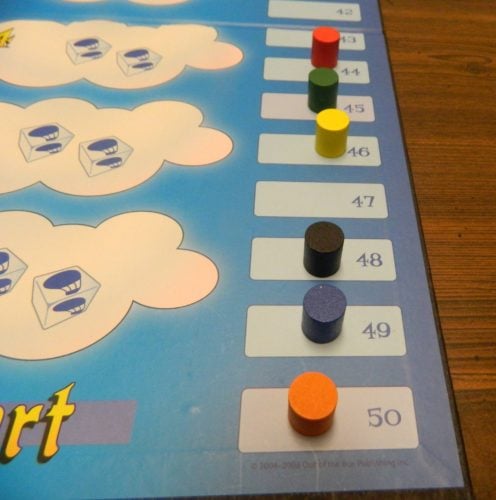 The orange player has reached 50 points and has won the game.

Another element that shows up in the game is reading your opponents. You usually aren’t in control of the balloon itself so you need to be able to read whether your opponents have the necessary cards to raise the balloon. Being good at reading whether an opponent has the necessary cards can be really helpful in letting you know whether you should stay in the balloon. If you can figure out a player doesn’t have the cards you need, you can jump out of the balloon before it crashes.

The final mechanic that makes an appearance in Cloud 9 is a memory mechanic. Along with being able to read the other players, having a good memory of what cards another player doesn’t have can be huge in the game. When a balloon crashes you learn what type of cards that the pilot doesn’t currently have. They will draw new cards but knowing what cards a player didn’t have in previous turns can be helpful in deciding whether to jump out of the balloon.

One of Cloud 9’s greatest strengths is that it is a game that can appeal to anyone. The game basically takes minutes to teach to a new player. Basically you just roll dice, play cards that match the colors you rolled, and guess whether the other players have cards to match the colors they rolled. Gamers and non-gamers should have no problems playing the game. The game has a recommended age of 8+ but I think kids younger than eight could play the game with some help from an adult.

Lengthwise Cloud 9 can vary some based on the players’ luck. If the players are lucky the game can end pretty quickly. I would say most games will probably last around 20-30 minutes unless someone is really luck. Twenty to thirty minutes seems about right. If it was less than 20 minutes it would feel short and if it was more than 30 minutes it would start to drag a little.

One small problem that I had with Cloud 9 is that it seems like there are too many situations where your balloon trip is cut short. Unless our group just got really unlucky, most trips only seem to last a couple clouds before the balloon comes crashing down. In too many rounds players had to jump really early or they didn’t score any points. I think the game would have been more enjoyable with longer trips since it would have been more suspenseful with more on the line.

There is a lot of like about Cloud 9 but the game does rely a lot on luck. That is somewhat expected with a game from the press your luck genre. Your fate in the game is sometimes out of your hand though. You can be good at reading the other players and jumping out at the right time but there is nothing you can do when you are the pilot. All you can do is roll the dice and hope that you have the necessary cards to prevent the balloon from crashing. Unless you are the last player remaining in the balloon you can’t jump out of the balloon so your fate is determined by the roll of the dice. It seems all too often that the pilot has to go down with the balloon. This means that an unlucky player is going to have a hard time winning.

Cloud 9 is a good game but there is one small problem. With Out of the Box Publishing going out of business recently Cloud 9 has not been reprinted since 2009. This has made the game kind of rare as the game usually sells for upwards of $50. While it might be hard to find Cloud 9, the game was basically reprinted under the name of Celestia in 2015. The basic gameplay in Celestia is exactly the same. Celestia does add some additional mechanics that give players special abilities and allow players to kick other players out of the ship. Since the game has the exact same basic mechanics as Cloud 9, you could just use Celestia’s components to play Cloud 9 if you were looking for a cheaper alternative of the game.

Should You Buy Cloud 9?

Cloud 9 is not a perfect game but it is a good/great game. While the game’s premise is pretty simple it actually adds enough interesting mechanics to make Cloud 9 stand out among other press your luck games. In Cloud 9 you need to be good at judging your opponents, remembering what cards your opponents don’t have and rolling the dice well when it is your turn to be the pilot. Cloud 9 has great components which supports the game’s engaging theme. The game is quick and easy to play and should appeal to everyone who has an interest in press your luck games. Cloud 9’s only major issue is that it relies a little too much on luck especially when you are the pilot.

If you would like to purchase Cloud 9 you can find it online: Amazon