To collect more white pegs than your opponent. 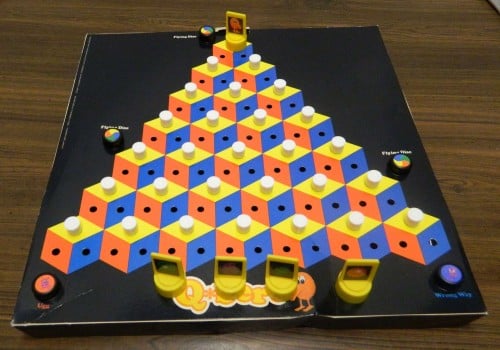 To begin each turn the Q*bert player drops the eight sided dice into the die-rolling tube so only the Q*bert player can see the number rolled. Keeping this number secret players may move up to the number rolled but may choose to hold some of the spaces to be possibly used for an escape if needed. If Q*bert doesn’t need to escape these unused spaces are wasted. Q*bert moves around the board on the yellow spaces and may move up or down between spaces but may not move side to side. For each space Q*bert moves onto, the player gets to remove the peg from the space. 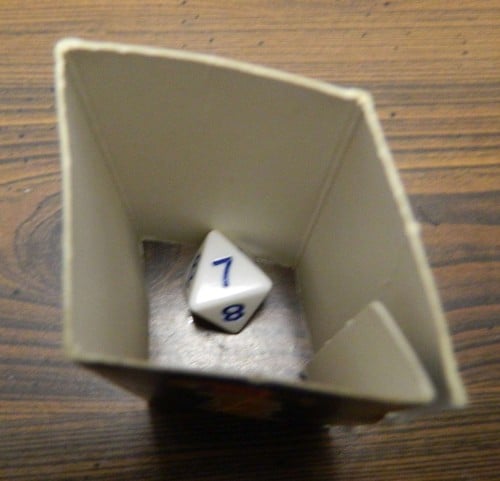 The Q*bert player rolled a seven. They can move Q*bert up to seven spaces or could move fewer spaces in order to use the extra spaces for a possible escape. 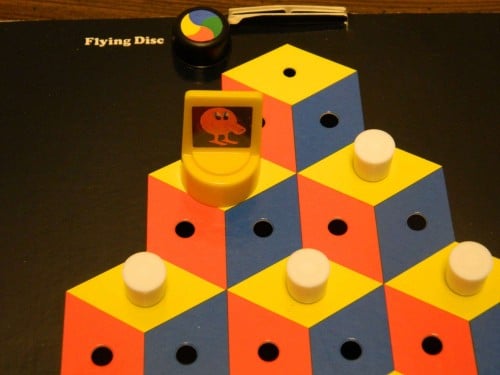 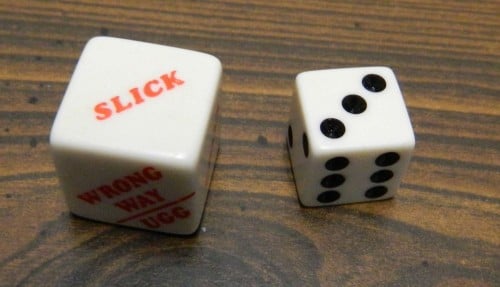 The player has rolled Slick and the number three. The “nasty” player gets to move Slick three spaces.

Coily (the snake)-Starts at the top of the board and can move up and down but not sideways (moves the same as Q*bert).

Red Ball and Green Ball-Starts at the top of the board and can only move downward.

Ugg – Starts at the red space in the bottom left corner. Ugg moves right on red spaces along the left side of the game board.

Wrong Way – Starts at the blue space in the bottom right corner. Wrong Way moves left on blue spaces along the right side of the board

Whenever the character die has a player move Ugg or Wrong Way they move along the two sides of the game board until they reach the top.

Slick – Slick starts at the top of the pyramid and can only move downward. Slick adds back a peg to any spaces he lands on. 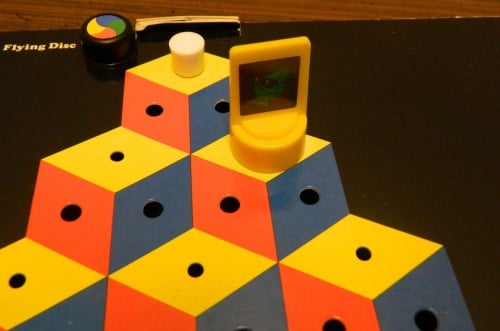 After Slick has moved off the top space a peg is put back on the space.

When Q*bert is captured the current round ends. Players count up how many pegs were collected during the round. If this was the first round, the board is reset and the players swap roles. Q*bert can be captured by the nasty characters in the following ways: 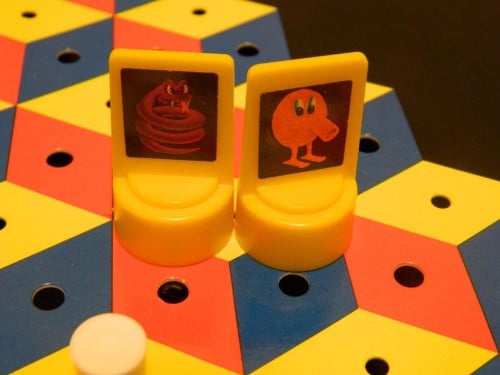 Coily – Q*bert is captured if Coily lands on Q*bert’s space and Q*bert can’t escape or if Q*bert lands on Coily’s space. Coily can’t capture Q*bert if Q*bert was on the top space and Coily just entered the game board.

Red Ball – If Q*bert lands on Red Ball’s space or Red Ball lands on Q*bert and Q*bert is unable to escape, Q*bert is captured. Red Ball cannot capture Q*bert when Q*bert is on the top space of the game board.

If the Q*bert player chose not to use their full roll and either Coily or Red Ball has landed on the space occupied by Q*bert, Q*bert can use the spaces that weren’t used to try and escape. If Q*bert can move far enough away that the enemy can’t catch up, Q*bert escapes capture and the current Q*bert player gets to keep playing.

If Q*bert is on one of the spaces next to a flying disc, Q*bert can use the disc in order to move back to the top of the pyramid. To use the disc the player needs to move onto the disc itself which counts as a space. Any additional movement left is forfeited when a flying disc is used. Once a flying disc has been used it is removed for the current round of the game. If the top space of the board is currently occupied, Q*bert moves to one of the spaces below the top space. 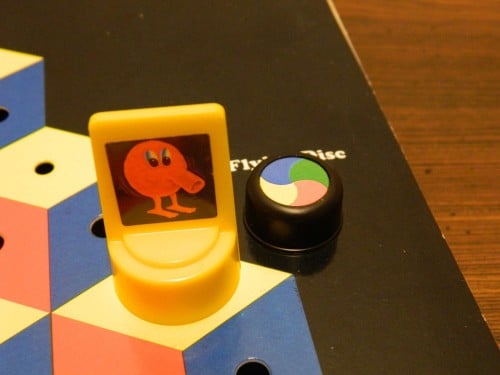 Q*bert can use one movement space in order to move onto the flying disc and be transported to the top of the game board.

Falling Off the Board

During the eighties, Parker Brother and Milton Bradley thought the new fad in board games was going to be board games based on the popular video games of the time. For some reason these companies felt that people would be interested in playing board game versions of the most popular arcade games instead of playing the actual arcade game. Most of these games are not considered to be very good as evidenced by Donkey Kong, Ms. Pac-Man, and the Pac-Man Card Game that we have reviewed here on Geeky Hobbies. Due to my experience with these other video game board games I didn’t have high expectations for the Q*bert board game. Unfortunately my initial thoughts were correct since the game seemed to care more about being authentic to the arcade game than actually making an interesting board game.

I have to say that Q*bert is one of the classic arcade games that I am least familiar with. I may have played the game a couple of times in the past but that would be my only experience with the game. With that said I have to say that Q*bert does a good job simulating the arcade games sometimes to its’ own detriment. Basically the whole game is set up around simulating the arcade game. Very few if any liberties are taken in order to turn the game into a board game. Q*bert as well as the nasty characters move just like they do in the arcade game. The game is so dedicated to simulating the arcade game that the game added a bunch of little rules in order to cover the different parts of the game. This is detrimental to the game since there are quite a few little rules that you have to remember which makes the game a lot more complicated than it needed to be and add little to the actual gameplay. The player playing as the nasty characters pretty much needs to always reference the rules just to know what they can do on their turn.

While I usually applaud games for sticking to the original material, in the case of Q*bert I think the developers would have done a better job if they took some liberties with the game to make an entertaining board game experience. Due to having to follow all of the rules from the arcade game there are just too many rules that are pointlessly complicated. The designers should have implemented the basic movement mechanics from the arcade game and added in some new mechanics in order to adapt the game to a board game. The concept of Q*bert could have had potential as a board game if more was put into the game instead of just turning the arcade game into a typical roll and move game.

Things aren’t much better for the Q*bert player. Since they have no idea what character the other player will be forced to move, they pretty much just need to guess where they should move on any given turn. This makes rolling high numbers really important for the Q*bert player since they should try to keep a couple extra spaces available in case they need to escape. If the Q*bert player keeps rolling low numbers they are pretty much doomed. If you don’t roll well you either need to use your full roll and thus risk Q*bert or not move at all which makes it impossible to make any progress in the game. In the one game I played, I rolled poorly and not surprisingly I lost the game.

The length of gameplay can vary so much based on how lucky the Q*bert player is. If the Q*bert rolls really poorly they could lose within a couple turns. If they roll really well though they can last for a long time. The success of the “nasty” player’s rolls play a big part in how long a game will last. I would say that in general the game would probably take around 20-30 minutes to complete. While the game has a lot of unnecessary rules, once you understand the rules the game moves quickly.

Not surprisingly the Q*bert board game is not that good. The biggest problem with the game is that it is just so boring. The game tries to pack in too many rules from the arcade game and fails to actually add any interesting mechanics. The game is just a really bland roll and move with essentially no strategy and a ton of reliance on the luck of the roll.