To be the first player to have Ms. Pac-Man eat all of the dots in their section of the game board.

Both the Ms. Pac-Man Player and the ghosts must follow these rules when moving.

The Ms. Pac-Man player always plays first. The player spins the spinner and then moves the corresponding number of spaces. Whenever Ms. Pac-Man leaves a space that has a yellow pellet on it,  it is removed from the game board. 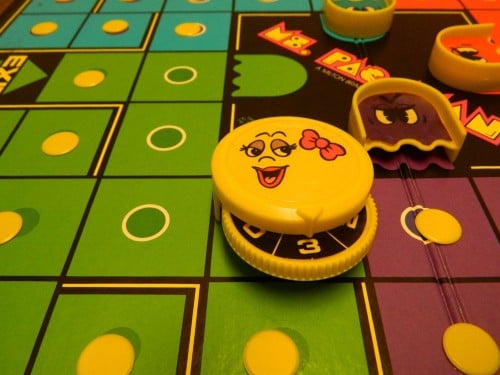 The Ms. Pac-Man player spun a three. They will get to move Ms. Pac-Man three spaces in any direction. The player should try to avoid the purple ghost though.

After the Ms. Pac-Man player has moved, the ghost players take turns moving in a clockwise fashion. Each player rolls the die and then moves the corresponding number of spaces. If you roll a “F2” you can move your ghost pawn two spaces but you also have to flip your ghost to the opposite side. If your ghost was on the strong side it will flip to the weak side and if it was on the weak side it will flip to the strong side. If a ghost lands on another ghost, the current ghost moves forward one space. 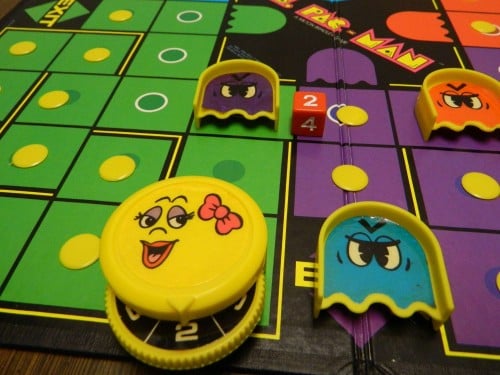 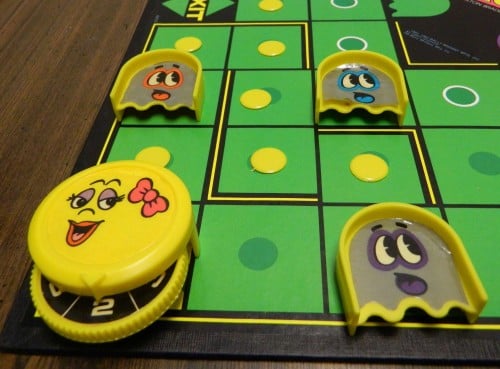 The Ms. Pac-Man player has ate the power pellet. This turns all of the ghosts to their weak side. If Ms. Pac-Man lands on any of these weakened ghosts, the player controlling her gets an additional turn.

When the last dot is removed from one player’s section of the game board, that player wins the game.

Back in 1982, during the middle of the Pac-Man craze, Ms. Pac-Man was released. Seeing how successful Ms. Pac-Man was, Milton Bradley decided to try their hands at creating a board game of the arcade classic.

When I found Ms. Pac-Man at a rummage sale for a $1 I wasn’t expecting much. Most of the old video game tie in board games are not considered to be very good. Since I like collecting old video game merchandise and it was only a $1 after all, I decided to pick up the game even though I knew that there was a good chance that it was not going to be very good. While the board game is a lot more faithful to the original game than I was expecting, that doesn’t make the Ms. Pac-Man board game a good game.

Just like with the Donkey Kong board game, I have to give the creators of the Ms. Pac-Man game some credit since they did a pretty good job simulating the arcade action of the game. The board game incorporates most of the mechanics from the arcade game which includes eating the pellets, the chase between the ghosts and Ms. Pac-Man, the exit spaces that take you to another part of the game board, and the power pellets that allow Ms. Pac-Man to eat/capture the ghosts.

The game could have easily went with a simple generic roll and move game where you would just roll the dice/spin the spinner. Most games of this era would have pursued this path since a lot of these games were only made to cash in on a current fad. The designers decided to put in some time to try and implement as many of the mechanics of the arcade game as they could.

Fans of the Pac-Man franchise should appreciate the effort put into the game. The artwork is well done and does a good job maintaining the style of the arcade game. This means that the Ms. Pac-Man board game would work as a good display piece.

A Bland Roll and Move Game

Even though the game is faithful to the arcade cabinet, that doesn’t mean that the Ms. Pac-Man game is actually a good game. I would actually consider it to be a pretty bad game overall. The biggest problem with the game is that it is just boring. The new mechanics just don’t do enough to make Ms. Pac-Man anything more than bland roll and move game.

Let’s start with the pellet mechanics. The pellet mechanics are kind of nice since they do a solid job simulating the same mechanic from the arcade game. The problem is that they don’t really add any decisions or strategic options to the game. Other than the power pellet, the pellets are just obstacles that you just need to clear from the game board. Even the power pellets don’t add that much to the game since they are only one use items. It is hard to predict when it is best to use them since you have no idea how well you are going to spin or how well the ghosts are going to roll. You just need to guess when the best time would be to use it.

One of the biggest problems with the pellet mechanics are that they are responsible for a lot of the luck required to win the game. Whoever rolls/spins best will end up winning the game unless a player makes poor decisions. Whoever gets to be Ms. Pac-Man first has a pretty big advantage since they will be able to clear several of their pellets before any of the players’ ghosts even get within striking distance of Ms. Pac-Man. In the game I played the first player cleared a fourth to a half of their pellets before they were even challenged by a ghost.

As a ghost you can also be unlucky by continually rolling the “F2” side of the die. I think at one point I rolled the “F2” side three or four times in a row. Since this keeps your ghost on the weak side, you can’t do anything to help yourself. Going after Ms. Pac-Man while weak is just giving Ms. Pac-Man a free opportunity to capture you which gives the player a bonus turn. While weak, all the ghosts can do is stay close enough to be able to strike on the next turn while also staying far enough away that Ms. Pac-Man can’t capture them.

Overall I thought Ms. Pac-Man’s components were pretty good for an early 1980’s board game. The ghosts, Ms. Pac-Man, and the pellets are all made out of plastic instead of cardboard which is nice. The artwork on the game box and the components is good. I could see the box being something a Ms. Pac-Man collector might want to display with its nice artwork that is very reminiscent of the arcade game.

My one complaint with the components is the game board. The game board is just too small. Each player only has seventeen pellets that they have to collect. That may sound like quite a few but it isn’t. If the first player was able to spin really well they could theoretically win the whole game in only a couple moves if none of the ghosts were able to capture them. This is extremely unlikely but it could happen. Even if control over Ms. Pac-Man changes hands several times, the game is still too short. If one player gets lucky and has several turns to collect pellets without having to worry about ghosts they will create a large lead which will be hard to overcome. With a larger board the game would have lasted longer which means that good and bad luck would have balanced out more which would have improved the game.

While the Ms. Pac-Man game does a good job simulating the arcade game, it doesn’t do a good job actually creating a fun engaging experience. The game is just boring to play and relies way too much on luck to determine the ultimate winner. Even though the game has some unique mechanics, it is not much different than every other roll/spin and move game.

If you are a fan of the Pac-Man franchise or like collecting old video game merchandise, the Ms. Pac-Man game may be worth looking at. The theme/artwork is well done and should appeal to collectors. Otherwise you are probably better off avoiding the game.