How to Play Pac-Man Card Game

Pac-Man is a 1982 Milton Bradley card game that tasks players with forming 3-card combinations to score points. The game is very simple, each turn you play a card and then draw one (you will always have 3 cards in your hand). Play then continues clockwise in the exact same way until a player scores 100 points. Each player gets a mat containing two rows of three that any player can play on (even your opponents). There are number cards (which can be 0, 1, 5, or 10), Pac-Man cards (which have a plus or multiplication symbol), and ghost cards (all of which have a subtraction symbol). Your goal is to set up your board to give you a lot of points (by playing high number cards and a plus or multiplication card) and keep your opponents from scoring a lot of points (by playing 0, 1, and/or subtraction cards on their mats). 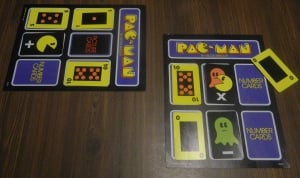 A sample situation where one player has their board set up pretty well (10 x __). Another player is about to play a 0 to ensure the player doesn’t win the game (another 10 would give them 100 points and the win). Since 10 x 0 is 0, they will score 0 points for this combination.

After the third card in the combination is played, the two number cards are added, subtracted, or multiplied (based on what modifier card was played) and added to the total of the player who owns the mat that was completed. The first player to 100 points is the winner (it seems like a lot but you could technically win the game in three or less turns). There is an option for an advanced game, which doesn’t really add a ton to the game but I would still recommend using it. It simply allows you to score negative points if your card combination subtracts a large number from a small one. This will definitely make the game longer (unless you use the other additional rule, moving the required points down to just 50) since trailing players will probably gang up on the winning player and try to give them negative points. 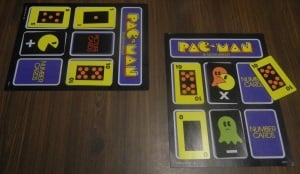 In this situation, nobody has stopped the player with the good combination. They are about to play another 10 and rack up 100 points and the win.

My Thoughts on Pac-Man Card Game

I’m going to get this out of the way right away, except for the art on the cards there is nothing “Pac-Man” about the game. You could have themed this game using any other property and it would have worked exactly the same. If you are a big “Pac-Man” fan, unless you need to collect everything bearing its characters likenesses, you are missing nothing if you don’t have a copy (the art isn’t even that great and collector value is quite low). There are no similarities whatsoever to the video game.

While most licensed games are awful, you will find a few gems from time to time. While I wouldn’t call the “Pac-Man” card game awful, it’s far from a good game. The game’s mechanics are definitely lacking though. With you only being able to play one card per turn, an opponent can always mess up your card combination if they wish. You also have to play on your opponents mats quite often and sacrifice your own gain for the good of the group (to keep the other player from scoring 20, 50, or even the full 100 points with a single combination). Even with just three cards in each player’s hand, its almost impossible that none of your opponents have a way to screw up your combination. Games can get pretty long unless one player sets up a 10 x 10 score and their opponents somehow don’t have a way to stop it.

If the game would have more mechanics than just playing a card and then drawing one, there could be a decent game here. However, it gets pretty boring with the game’s pretty much scripted gameplay (in the game I played, as soon as someone laid down a 10 or multiply card on their mat someone else would hit them with a 0 or subtraction card). Your choices are pretty much made for you, if someone is threatening to score a lot of points you have to mess up their combination. If nobody is threatening, you just have to play good cards on your own mat and hope nobody has a counter in their hand. Extra mechanics like cards that allow you to play one card on your own mat and one on an opponents or allow you to replace a card with another one from your hand would have added some much needed variety to the game (and made it much easier to score serious points instead of just hoping to get 5-10 points per combination). Basically, the gameplay isn’t bad at first but once you realize how little there is to the game, it quickly becomes boring.

Another big problem with the game is the lack of cards included. There are only 42 cards so if you are playing a 4-player game, you will have to shuffle about every 7 rounds. That might not sound too bad but since each player’s turn usually only takes a couple seconds and points are hard to score, you’ll be shuffling every couple minutes and probably several times per game (I think we probably had to shuffle at least 6-7 times before the game mercilessly came to an end). The mats also could have been made a little better with a thicker cardboard.

One positive is that the game is very simple and easy for children to play. The box recommends ages 8-14 but I think even younger kids could get the gist of the game. The Pac-Man card game could be a good math lesson for youngsters though it would have been nice to have numbers other than 0, 1, 5, and 10 (to make for some harder math problems for them to solve).

Should You Buy Pac-Man Card Game?

The 1982 “Pac-Man” card game isn’t terrible but a lack of game mechanics or any actual strategy will eventually bore anyone. It isn’t as bad as it could have been, being a licensed game from the 1980’s, but it just isn’t worth playing. You might enjoy the first couple turns but it will quickly turn into a boring and frustrating experience.

Where to Purchase: eBay Any purchases made through these links (including other products) help keep Geeky Hobbies running. Thank you for your support.

How to Play One Deck Dungeon Board Game (Rules and Instructions)