To be the first player to win the best of three or five trophies.

Separate the two decks based on the color on the back of the cards. Shuffle the two decks separately. Each player draws five cards from their deck and chooses which card they would like to use as their leader. Both players reveal their leaders at the same time. and place them in the center position on their side of the game board. Randomly choose which player will start first.

During the first round there is a mandatory ceasefire where neither player can declare attacks or use any orders on the cards.

During each wave each player can perform two actions (unless you have an ability that gives you more) from the following list (you may do the same action twice):

Each hero can only use one of Restructure, Attack and Recruit during a wave. 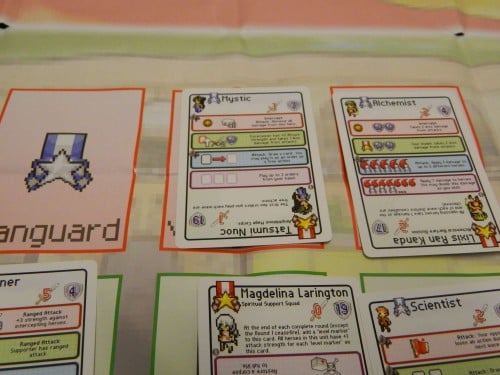 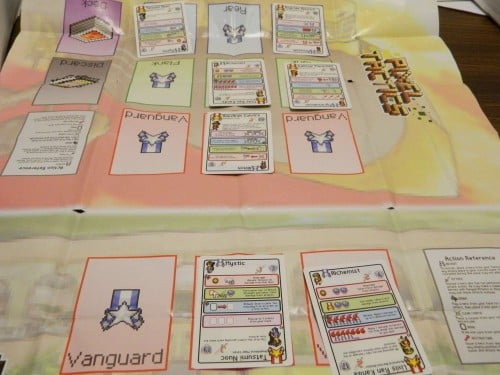 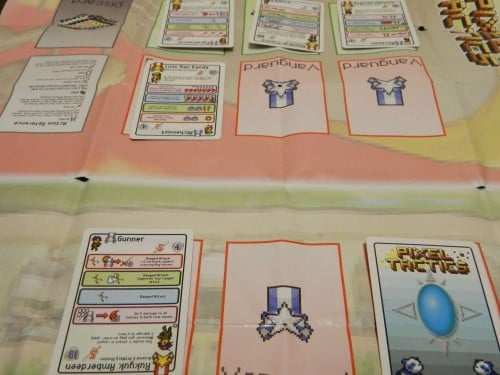 The top player has a hero with intercept in the Vanguard row. This means that if the bottom player wants to attack the left column they first must attack the character with intercept before attacking heroes further back in the column.

Some heroes have special abilities they can use instead of attacking the opponent. These abilities’ text starts with “Attack:”. All other abilities are passive and don’t require using an action to use them. A player can use the ability associated with the row the card is placed in instead of attacking. When using an attack power you don’t attack any unit so this doesn’t activate enemy abilities that come into affect when “attacking a unit” even if the ability causes damage. Just like with normal attacks you can only use each attack power once for each wave. You also can only use the attack power or attack normally during each wave. 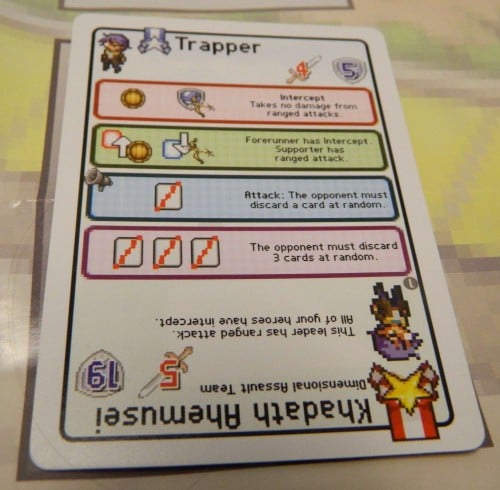 If played in the Vanguard row this Trapper has the intercept ability which is a passive power. In the Flank row the hero gives intercept to the card in front of them and a ranged attack to the card behind them (passive ability). If played in the Rear row the player can have their opponent discard a card at random instead of using the card to attack during the rear wave.

While fighting, heroes will eventually be killed. A unit is killed when it takes more damage than it has health (shield icon). Whenever a unit takes damage you place the corresponding damage counters on it. A unit that has more damage on it than health does not immediately die though and can still fight, act and heal until the end of the current wave. This means that players cannot melee a hero that is behind another hero that was mortally wounded during this current wave. 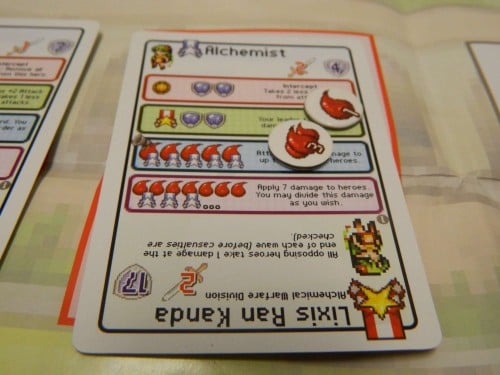 This hero has incurred more damage than it has health. This hero is mortally wounded and will die at the end of this wave if it isn’t healed.

When the current wave ends all units that were killed are flipped over and are placed back onto the space that they occupied. These heroes are corpses and stay on the field until they are cleared or an ability revives them. New heroes cannot be played on spaces occupied by corpses and the enemy can melee a hero located behind a corpse. The only way to clear a corpse is to use an ability that clears them or use an action to remove the corpse. 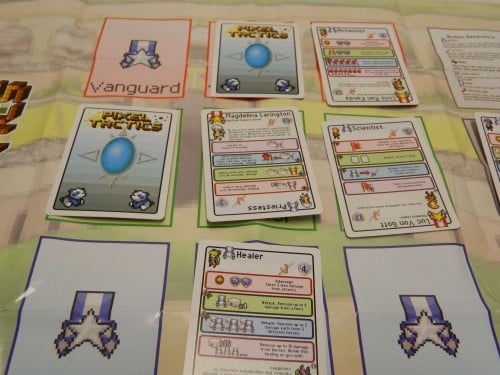 The face down cards in the top middle and middle left are both corpses. These cards either have to be revived or they need to be discarded for another hero to be played on their space. 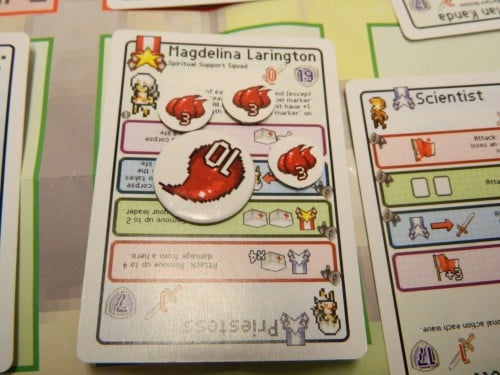 This leader has as much damage on it as it has health. Unless this player is able to heal the leader, the other player will win the current game.

If a player has enough trophies to win the match, the game ends with that player winning. If neither player has reached enough trophies to win the game, another round is played. Leaders used in the previous round are not added back to the deck so each player will have one less card. To start the game each player also draws one additional card at the beginning of the round for each trophy their opponent has. The player who won the previous round gets to start the next round.

Here is some terminology that is referenced by some of the cards:

Being a fan of card games and retro video games I was excited to try out Pixel Tactics. I had pretty high expectations for the game because of the theme and the fact that it is pretty well regarded by the board game community. After playing the game there is a lot I liked about Pixel Tactics but the length of the game keeps it from being great.

For the most part Pixel Tactics plays like a collectible card game without the need to buy a bunch of booster packs. Unlike a traditional card game though every card has four different uses based on where it is played. I really liked this mechanic since it gives players a lot of options with each and every card. While I found some cards to be more powerful than others, each card has a purpose in certain situations so none of the cards feel like a waste. This flexibility gives players a lot of strategic options especially if you buy multiple different sets of the game and add the cards together to form larger decks.

For the most part I would classify Pixel Tactics as a moderately difficult game. The game has quite a few little rules that may seem daunting at first. For your first couple of turns you may have to regularly reference the rules for a rule clarification. Once you play the game for a while though you start to pick up the rules and things move much smoother. For some people the game may remain somewhat difficult though since Pixel Tactics is one of those types of games where you need to factor in card text from a bunch of cards and figure out how to best utilize the different effects of a card. If you hate these type of games, Pixel Tactics may not be for you.

I liked most of the rules in the game but I think something should have been done with the game’s corpse problem. I understand why the game handled corpses the way they did in the game and it is an interesting idea but the corpses sometimes feel like a waste of time. In the game I played so many heroes ended up being killed that we had to waste so many actions just clearing bodies from the battlefield. While I don’t mind the idea of having to clear the corpses, I wish it was easier/quicker to get rid of them. I think the game could have benefited from a rule that allowed you to use an action to clear multiple corpses instead of just one.

The main reason the game takes so long is that there are so many different things you can do on any turn. You can choose from six different actions on any given turn. If you want to take any time planning out your moves you will take quite a bit of time analyzing your options. This isn’t helped by all of the text and powers that you need to consider with regards to every card in the game. Especially when you are not familiar with the game, it takes so long just to figure out what you want to do on any given turn.

The box for the game claims that the game takes 30 minutes to play. Based on my experience there is no way that is the case unless both players know all of the cards really well and neither player thoroughly looks through their options. The game is more like a one to two hour game depending on how many trophies you are playing to. If either player suffers from analysis paralysis this problem will be even worse where the game will feel like it will never end.

Overall I thought the contents were decent overall. I really liked the artwork being a fan of old pixel art video games. The artwork and theme in general is pretty good in Pixel Tactics. The cards are designed well making it easy for you to find the information you need on any given card. I wish the damage counters were a little better than just cardboard pieces but they serve their purpose. The biggest problem with the game’s contents is with the playmat which just so happens to be printed on the back of the instructions. Good luck referencing the rules while trying to play the game. I tried and it was a pain. You could play the game without the play mat but I wouldn’t recommend it.

Pixel Tactics has a really good foundation for a card game. I love the artwork and I like all of the options that the game gives you with each card. Pixel Tactics has plenty of options for strategy and players can adapt the cards to their own preferred play style. While the game seems a little overwhelming at first, once you get a handle of the game it becomes pretty easy to play. The only big complaint I have with the game is the length. The game just takes way too long to finish. Even getting familiar with all of the cards probably won’t fix the problem. If it wasn’t for the length I would have said that Pixel Tactics was a fantastic game but due to the length it is only a good game.