To get Champagne Charlie or Saucy Sue to your nightclub. 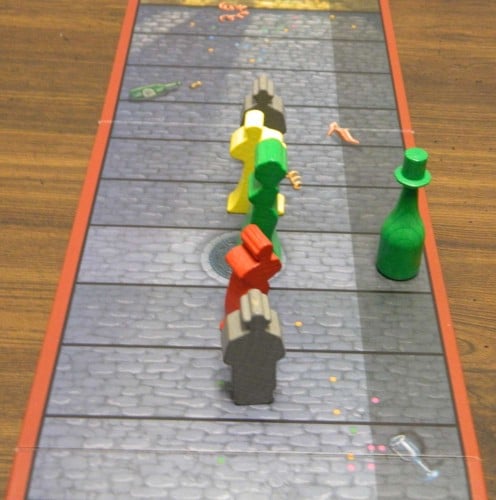 A player’s turn consists of three steps. During the first step the player can choose from one of three options.

After performing one of those three options the player will draw back up to eight cards (or draw no cards if they chose the second option). Finally the player will move Champagne Charlie if he needs to be moved.

The cards in Times Square fall into four different colors which correspond to the different colored pieces. The color of the card indicates which piece that it moves (with two exceptions). During their turn players can play as many cards of one color as they want as long as none of the following rules are violated.

Here is a breakdown of the different cards and what they do.

There is only one type of green card in the game which allows a player to move Sue one space in their direction. By playing two green cards at the same time the player can move Sue and both her bodyguards one space (more on this in the Special Abilities section).

There are three types of grey cards. The cards that just show the number one allow a player to move one of the guards one space. The cards with “1+1” allows a player to either move both guards one space or one of the guards two spaces. By moving a guard two spaces the player cannot move the guard forward and then back to the space they started on. Finally the card with the two arrows pointing at one another forces both bodyguards to move to the two spaces adjacent to Sue on the left and right. When moving the bodyguards the rule requiring a bodyguard on both sides of Sue has to always be followed or the move is not allowed. 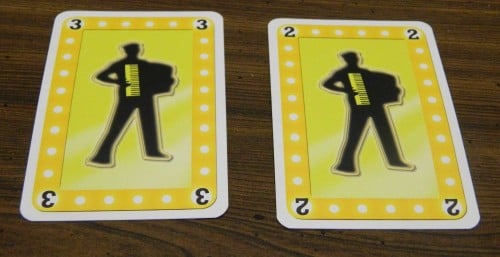 The red cards with numbers move Deb (red piece) the corresponding number of spaces. By using Deb’s special ability, the numbered cards can be used to move other pieces (see Special Abilities section). The cards with a sewer cover in the corner moves Sue back to the middle space of the game board.

After a player has performed their action and drawn the necessary cards, it is time to move Champagne Charlie. Charlie stays on the outer/dark track. Charlie moves in either direction when certain circumstances are present. Charlie moves one space towards a player’s nightclub for each piece on one of the two nightclub spaces at their end of the board. Bodyguards, Deb, and Hal all work in this way. Charlie also moves one space towards a nightclub if the player has Sue and both her bodyguards on their side of the board. 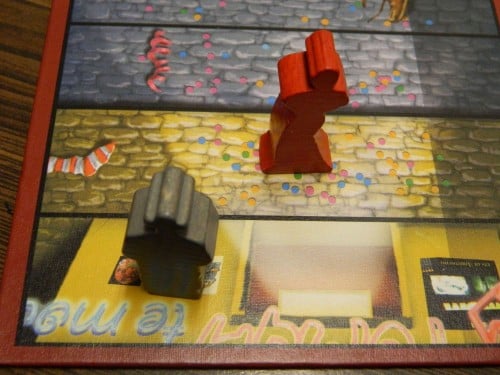 Two of the people are in this person’s nightclub. Charlie would move two spaces towards this nightclub. 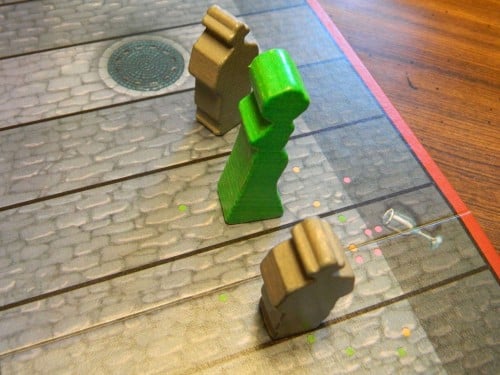 Sue and both of her bodyguards are on one side of the game board. This player would move Charlie one space towards their nightclub.

When a player plays two green cards together, Sue and her two bodyguards all move one space in the same direction. Players can use this ability multiple times in a turn.

Instead of playing or discarding cards, players can use Handsome Hal’s special ability. Hal has the ability to attract Sue or one of her bodyguards to his space. When using this ability the rule where a bodyguard needs to be on both sides of Sue must be followed and if violated will prevent the special ability from being used. 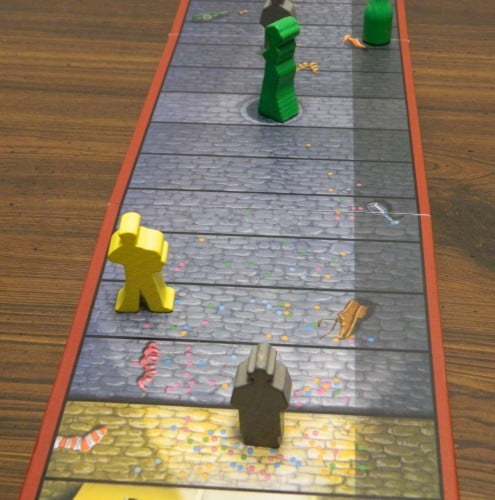 A player can use their turn to use Hal’s special ability to either move Sue or the bottom bodyguard to his space.

If Dancing Deb is closer to your end of the board than Sue is, you can use her special ability. Sue’s special ability allows you to use any of her numbered cards to move any of the other pieces. Once a piece has been moved in this manner though all red cards played during this turn can only move the same piece. If the player uses the ability on a bodyguard, the player can move either bodyguard with the additional cards that are played. If you move Sue with this ability you can never move Sue to the space occupied by Deb or move Sue past Deb. 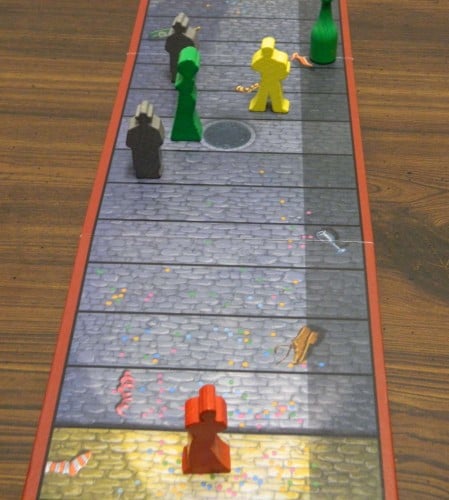 Times Square can end in one of three different ways. If Charlie or Sue reach either player’s nightclub, that player automatically wins the game. If players have gone through the whole deck of cards twice, whichever side of the board that Sue is currently on will win the game. If she is in the middle of the board, the player who Charlie is closer to will win. If Charlie is also in the middle the game will end in a tie. 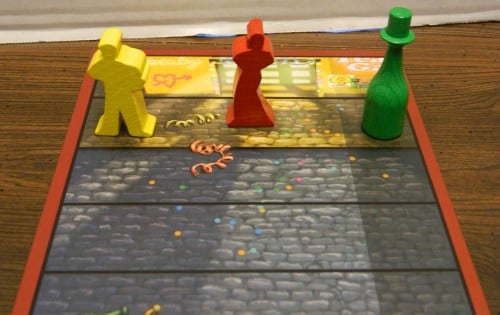 Charlie has reached one of the player’s nightclubs. That player has won the game. 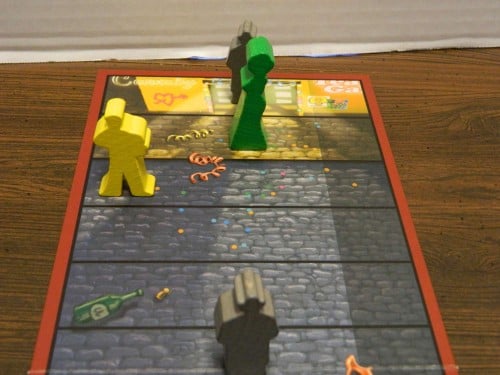 Sue has reached one of the player’s nightclubs. That player has won the game.

Another week another Reiner Knizia game. Today I am looking at the 2006 Reiner Knizia game Times Square made by Kosmos. In Times Square you and your opponent run competing nightclubs that just so happen to be one dark alley away from one another. You use cards in order to try and persuade guests to come to your nightclub instead of your opponent’s.

A lot of people have a love/hate relationship with Reiner Knizia’s games. Reiner Knizia has made a lot of good games over the years. The problem is that he has made so many games that some of them have to be clunkers. What do you expect from a designer that has made hundreds of games? I have played a lot of Reiner Knizia games and I really haven’t played one of his clunkers yet. A lot of his games that I have played are pretty average but they always have a couple things going for them that make them worth playing. One of the key features of Reiner Knizia games are simple mechanics that have quite a bit of strategy hidden beneath the surface. That proves true for Times Square as well.

Basically the game works like a more complicated version of tug of war. Your goal is trying to push people towards your side of the board. Unlike normal tug of war though each piece has special abilities that add a lot more options to how you play your cards. While the game has the possibility that one player could destroy their opponent, in the games I played that was not the case. Unless one player is a lot luckier than the other player I don’t see one player winning in a landslide. The game has a lot more give and take as one player makes a little progress and then the other player reverses it creating a back and forth feeling to the game.

As I was reading through the rules for Times Square I was kind of surprised by how many different rules there were in the game. A lot of the movement mechanics felt kind of random which was strange for a Reiner Knizia game. Most of the abilities just seemed to be completely random to the point that the game felt like a random mess of different mechanics. It seemed like there were too many mechanics in the game. Explaining all these different rules to the other player didn’t help matters.

While the game seems confusing at first, once you get a hang of it things move much more smoothly. It probably took most of the first game to fully understand the game but once both players fully understood the game it ran really smooth. While the box says that the game takes 20-30 minutes, I can’t imagine a game taking that long. The games I played lasted more like 10-20 minutes. Once you understand the rules the game moves really fast since players can only choose to do a couple different things during each turn.

Like Reiner Knizia’s other games, Times Square is another game that looks simple on the surface but actually contains quite a bit of strategy. Basically all you do is play cards but positioning the different characters has a lot of impact on the game. While at first the special abilities seem kind of random, when you start playing the game you really start to figure out how they work together to create an interesting back and forth strategic game. You really can’t focus on any one person since your best chance of success is to use all of the characters together. If you give the other player too much control over a character they could use their special ability against you in order to gain a big advantage.

Outside of the special abilities your success in the game will depend on the cards you end up playing. Since you always get to draw back to eight cards, unless your hand is terrible I really don’t see the point in wasting your turn discarding cards. The key to playing cards comes down to two things. First you want to position the pieces to take advantage of the special abilities. You also want to try and play as many cards as you can on your turn. Since you draw back up to eight cards at the end of every turn you might as well try to play as many cards as you can since they can only help you. The more cards you play the more you benefit.

This fact does lead to one of the biggest problems with the game though which is luck. Like any game that involves cards, there is quite a bit of luck involved in the game. Luck really comes into play with regards to the distribution of cards in your hand. In a lot of games you probably want to get a good distribution of different types of cards. At least in the games I played, this is not the case in Times Square. In every game that I played the player that got more of the same colored cards won the game. This is because they could play more cards each turn which allowed them to move pieces further and since they drew back to eight cards they were never at a card disadvantage.

While not perfect, I actually had considerably more fun with Times Square than I was expecting. While the game is pretty simple once you get the hang of it (typical of Reiner Knizia games), the game still has quite a bit of strategy to it. The game plays like a game of tug of war but with each character’s special ability there is quite a bit of strategy to the game. Like most games that utilize cards though the game has a decent amount of luck to it.