Here on Geeky Hobbies we have looked at quite a few different bluffing games. In the past we have looked at Hooey, Nosey Neighbor and Stone Soup which fit into your beginner/family bluffing games. Today I am looking at Fibber which was made by the creators of Hedbanz. With one quick look at the box you can tell that Fibber is a silly game. Basically the game recreates the story of Pinocchio where your nose grows each time you are caught lying in the game. Fibber is an okay game but it is probably better suited for children than adults.

How to Play Fibber

Each player puts on a pair of glasses. The gameboard is put in the middle of the table. Put the silver nose on the Bigfoot space. Shuffle the cards and deal them out evenly to the players. The player to the left of the dealer goes first. 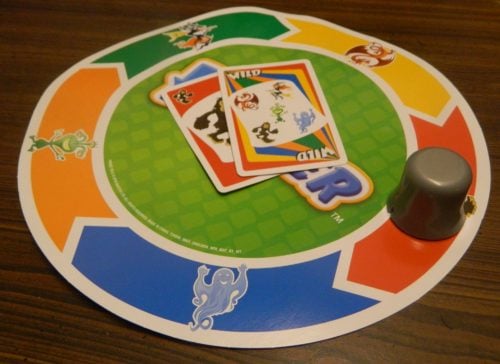 If you don’t have any cards that match the space that the silver nose is on, you will have to play at least one card that doesn’t match the space and say that it does. Even if you have a card that matches the current space you could decide to bluff additional cards in order to try and get rid of them. 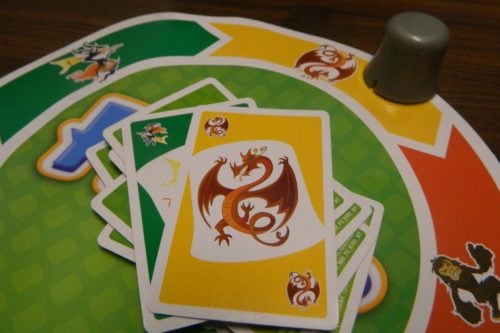 This player was supposed to play dragon cards on their turn. They decided to fib by playing one dragon card along with a witch card.

If you think someone is bluffing you can call them a fibber. If they were fibbing they don’t have to reveal the cards that they played. They will add one of the noses to the end of their glasses and take all of the cards from the table and add them to their hand. 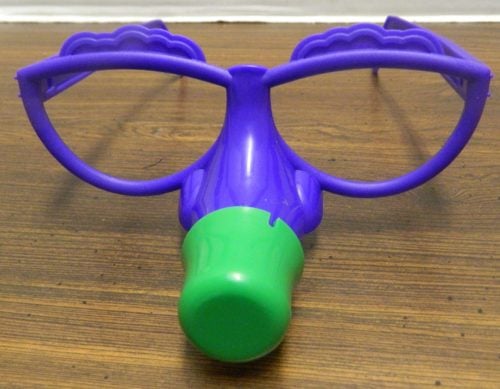 This player was caught fibbing so they had to add a piece to their nose.

If you call someone out and they weren’t bluffing, they show you the cards that they played. For incorrectly calling them out, you add a nose to your glasses and take all of the cards from the table.

After cards have been played and the players have had a chance to call out the player for bluffing, the silver nose is moved to the next space. The next player then takes their turn.

If a player gets rid of all of their cards, they get to remove all of the noses from their glasses. All of the cards are then shuffled and dealt out evenly to all of the players like at the beginning of the game. The silver nose is also moved to the Bigfoot space. The next player will then take their next turn.

All of the noses have been taken which ends the game. The player on the left has won the game with only one nose piece.

My Thoughts on Fibber

As I have already mentioned, in the past we have looked at Hooey, Nosey Neighbor, and Stone Soup. I bring this up again because the similarities to Fibber are numerous. Basically in all four games players take turns playing cards. Each player is given a card that they have to play. If the player has that card(s) they can play them with no risk. If the player doesn’t have that card though or they want to take a risk they can play a different card(s) and claim they are the type of card that they have to play. This main mechanic is basically exactly the same in all four games.

If I had to classify Fibber I would say that it is a beginner’s bluffing game. The game was made for children so the rules are pretty easy to follow. Basically the only mechanic in the game is playing cards with occasional bluffing when you don’t have a card that you can play. Being designed as a children’s game, Fibber is a pretty silly game. To play the game you have to put on silly plastic glasses and add colored pieces to the end of your nose every time you are caught lying. While I didn’t play the game with children I can see younger children really liking the game with their parents. I don’t see the game going over well with serious gamers though.

I am not going to pretend that Fibber is a great game because I don’t believe it is. At the same time I don’t think it is terrible either. Unless you are a really serious gamer who isn’t willing to make fun of yourself, I think you can have some fun with Fibber. It is a very basic bluffing game though. More could have been added to the mechanics but they aren’t broken. There are better bluffing games available but if you like bluffing games you should have some fun with Fibber.

The biggest problem with Fibber is an issue that impacts all of these type of bluffing games. I like the idea of being able to bluff in a game but I don’t like when the game forces you to bluff. Since the game forces you to play a card(s) based on the current space, if you don’t have any cards that match the current space you are forced to bluff. It is easier to bluff in these situations if you have more cards but it can be really hard avoiding being caught especially if you don’t have many cards left.

This is just one indicator of how much luck plays a part in your success in Fibber. As soon as the cards are dealt out, one player is basically predestined to win the hand. As soon as you look at your cards you can figure out whether or not you are going to have to bluff at some point. Some players will be forced to bluff where others can get rid of all of their cards without having to bluff once. Unless someone is able to get away with a bluff, the player(s) who aren’t forced to bluff will likely get rid of all of the cards from their hand. While this is something that you really can’t avoid in this type of game, I wish there was a way to limit this type of luck.

One unique thing that Fibber adds to the formula, that I hoped would help with this problem, is the idea of the wild card. The wild card is an interesting idea since I think it both helps and hurts the game. What I like about the wild card is that it acts as a safety net. I have already mentioned that I hate when these type of games force you to bluff. The good thing about wilds is that they can sometimes let you avoid some of these situations.

The problem with the wilds though is that they kind of interfere with the bluffing mechanics. With the wilds in the game it is really hard to catch someone bluffing. Without the wilds you can get a pretty good idea how many of one type of card the player could possibly have. For example if you have two of a card and there are only four total, the other player can only have two of the card at max. With the wilds though you really can’t tell unless you have a lot of wilds along with the card that is being played. Usually the best you can do is just guess whether a player is bluffing or not. This leads you to taking a pretty big risk calling out another player which means that you aren’t as likely to call someone out for bluffing.

Finally I think the components in Fibber are not bad but they could have used some work. The cards and gameboard are quite thin making them susceptible to creases and other damage. The plastic components are of a decent quality. The noses snap to the glasses and each other pretty well. The problem with the glasses though is that they don’t work well for people that wear glasses. It is pretty uncomfortable wearing your normal pair of glasses along with the plastic glasses for Fibber on top of them.

Should You Buy Fibber?

While not a great game Fibber is still a decent game. The game is quick and easy to play. Fibber works well as an introduction for children to the bluffing genre of board games. Children will probably really enjoy the game due to how silly it can be. This silliness will probably turn off more serious gamers though. While you can have some fun with Fibber it does have issues. The biggest issues revolve around luck playing a crucial role in winning the game. Being good at bluffing can help you but you most likely will need a lot of luck to win the game.

If you would like to purchase Fibber you can find it online: Amazon