To be the first player to get rid of all of their chips.

Separate the sample question cards from the rest of the cards and give one to each player to be used as a reference card. Shuffle all of the other cards and place them in a pile in the center of the play area. Each player takes one headband and places it on their head. Each player then takes one of the cards and places it in their headband without looking at it. Everyone takes three chips and the rest of the chips are set aside. The tallest player gets to go first.

At the beginning of a player’s turn, the timer is turned over. During a player’s turn they ask yes or no questions in order to try and help them figure out what word is written on the card placed in their headband. Players can continue asking questions until their time runs out. When a player asks a question, all of the other players may only answer the question with “yes”, “no”, “could be”, or “I don’t know”. 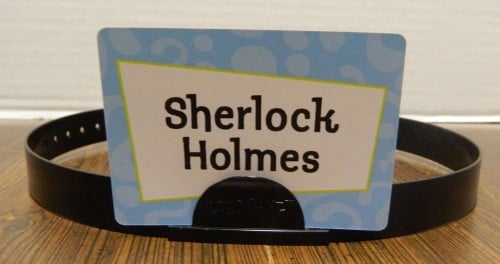 This player’s current card is for Sherlock Holmes. Some questions the player could ask include: Am I a person? Is my card a fictional character? Has my character appeared in a movie?

At any time a player can make a guess at what word is written on their card. They can make as many guesses as they want with no penalty for guessing incorrectly. If they are right they remove the card and place a new card in their headband. If there is still time left on the timer, the player can start asking questions about the new card. For every card successfully guessed, a player can get rid of one of their chips.

If at any time a player wants to give up on their current card, they can discard the card and pick a new card. As a penalty the player takes one chip from the bank’s stack of chips and adds it to their pile forcing them to correctly guess another card to win the game.

If the concept behind HedBanz seems familiar to you, that is probably because various varieties of the game have been around for a long time. Many people have played homemade versions that were made with paper/index cards that were stuck to players foreheads or the back of their shirts. Even the NBC show Community had their own version of the game called “The Ears Have It” which made an appearance in several episodes. For those of you wondering, “The Ears Have It” has never been actually made and I am guessing will never be made.

While Hedbanz will not be for everyone, if your gaming group is in the right mindset you can have a surprising amount of fun with HedBanz.

When you think of deduction games you probably think of games like Clue or other games where you have to figure out who committed a crime. While considerably different, Hedbanz is still a deduction game. While the game is simple and may look a little stupid at times, there is a lot more strategy to the game than you would expect.

In order to be good at Hedbanz you need to be good at forming questions that help narrow down possible solutions. Unless you are very lucky, you will not be able to guess your card without asking good questions. In order to be successful at the game you need to come up with a line of questions that will progressively narrow down the possible options for your card. Generally you want to start with figuring out whether your cards is an item, place or person. You then narrow down that subject with some other simple questions. If your card is a person you can ask questions to determine if the person is a man, woman, child, real, fictional, famous, and the age/time period of the person. Creative questions and out of the box thinking can save you a lot of time narrowing down the possibilities.

While your questions will have a big impact on your success in the game, some luck will come into play. Some cards are considerably easier than others to figure out. People seem to be the easiest category. You can use just a couple questions to really narrow down the possibilities in the person category. Items and places are considerably harder since they could be pretty much anything. For example who would ever think of a can opener (one of the cards in the game). If one player gets more easy cards than the other players they will have a distinct advantage in the game.

With only four options in how to answer questions, players could accidentally lead players in the wrong direction based on their response. A player could ask a question that the players decide deserves a yes response but that yes could lead a player in the totally wrong direction. For example in the game I played someone had the word mustache. The player proceeded to ask whether the item was “man-made”. Since a mustache is technically man-made, our group responded with yes. This mislead the player into thinking that the item was something that would be made in a factory. This might have been a situation where “could be” could have worked better but that would have likely mislead the player as well. To fix some of these issues we usually clarified our answers with a short explanation so players weren’t lead in the wrong direction.

The main reason I ended up picking up Hedbanz is that I found it at a thrift store for only $0.75. I am glad that I picked it up because it was more fun than I was expecting. It obviously won’t go down as one of my favorite games but I plan on keeping the game and bringing it out occasionally  when the mood is right.

The Life of the Party

While this is probably already pretty evident, Hedbanz is not for everyone. While I usually prefer more strategic games, I do occasionally enjoy a simpler party game. People who hate casual/party games are not going to like it. While the game has quite a bit more strategy to it than I was expecting, it is not the type of game that strategic players are likely to enjoy.

In the right mood though you can have a lot of fun with Hedbanz. The game can be really funny at times. Players can place a card on their headband and everyone could start laughing. Either because of inside jokes or funny coincidences some player/card combinations are just funny. With no knowledge of what card they have on their forehead players can end up asking questions that are funny for the word that they are trying to guess. All of the players then end up laughing with the current player having no idea what is making the question so funny.

Due to the simplicity of the game and the interactivity, I think Hedbanz would work great in a party atmosphere. If you want a game that is quick to play, doesn’t require too much thought or works well with people who don’t play many board games, I think Hedbanz could work really well.

Just looking at Hedbanz I thought the game was going to be pretty stupid. If I didn’t find the game for $0.75 at a thrift store I would never have even bothered picking it up. After playing the game I was pleasantly surprised. While I would only play it occasionally I had fun with it. The game has some strategy, it is easy to pick up, and in the right situations you could end up laughing really hard.

Hedbanz is not for everyone though and will not work in all situations. The players need to be in the right mood to really appreciate the game. It is not the type of game that a super serious person is likely to enjoy.

If you like family/party games that are not particularly deep but still fun I think you would like Hedbanz. While the game itself is not necessary, the game is quite cheap if you want to pick up a copy.

Does anyone have the game rules for hedbanz no limits?

I personally don't have Hedbanz No Limits. There is a video on YouTube of a review of the game which briefly goes over how the game is played. For the most part the game seems to be played in the same way as Hedbanz For Adults. The differences in the game seem to be that there are three different types of cards. One of the types of cards has one of the players act out the word instead of the player asking questions. The game also seems to have clues on the cards which the player can ask for but they will end up getting less chips if they use the clue.