How to Play Fruit Ninja: Slice of Life

Each turn begins with one player flipping over the top card (rotating each card). On the card there will be five fruit pictured. Some of the fruit will be cut and others won’t be cut. Both players play at the same time. Each player will have to flip over fruit matching the fruit that are cut on the card. When flipping over fruit they can only use their sword and can’t touch the fruit with their hands. 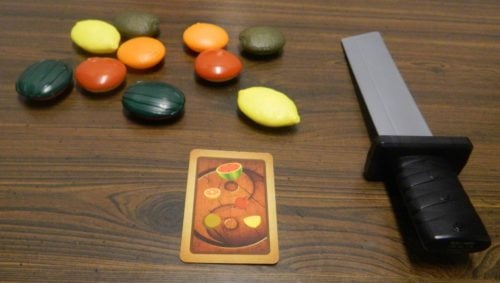 For this card the player has to flip over a watermelon, orange, and lemon.

If a player flips over a fruit that pictures a bomb, they must flip that fruit back over (using the sword). The player then has to flip over the other fruit of that type. 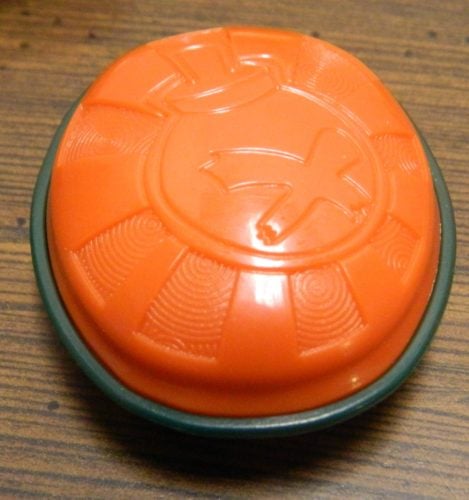 This player has flipped over a bomb symbol. They will have to flip it back over before flipping over any other fruit. 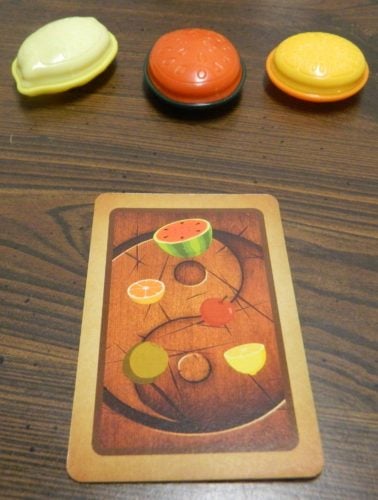 This player has successfully flipped over the fruit they need for this card. They can now take the card from the table.

After a player has won the card the next turn begins. The other player flips over the next card and another turn begins.

When a player gets five cards or another agreed upon number of cards, that player wins the game.

This player has collected five cards and has won the game.

My Thoughts on Fruit Ninja: Slice of Life

When I look at Fruit Ninja: Slice of Life I see a speed game that has been combined with a dexterity game. The main goal of the game is to flip over the fruit that match the cut fruit on the current card. Recognizing what objects are different on a card and then performing some action with that information is the main mechanic of a lot of different speed games.

The most unique mechanic in Fruit Ninja: Slice of Life is the dexterity mechanic where you have to use the swords instead of your hands to flip over the fruit. When you first play the game, you will probably have a little trouble using the swords to flip over the fruit. I started the game using the chopping motion (hitting the top of the fruit) since I thought it was going to work better. The chopping motion works but it is pretty inconsistent. When you hit a fruit you can turn it over but you can also easily knock the fruit off the table or flip over several fruits at the same time. After a while I switched to the slicing/flipping motion. It takes a while longer to adjust to flipping the fruit but it works quite a bit better once you get a hang of it. Once you get a hang of flipping over the fruit, the game mostly relies on recognizing the cut fruit and taking the appropriate actions.

The final mechanic in the game involves the bombs. I am guessing this mechanic was mostly added in order to incorporate the bombs from the video game. Since the game never indicates how players are supposed to arrange their fruit, players have to come up with their own house rule. Your first option is to let players arrange the fruit however they want. This adds a little memory to the game as you have to remember which fruit are safe. If players can arrange the fruit however they want they can arrange them in a way that they know which fruit are safe. Using this option basically makes the bombs pointless since it will be really easy to avoid them.

We choose to randomize the positions of all of the fruit each turn to prevent players from cheating in that manner. This worked well in preventing players from knowing which fruit was safe. This basically made the mechanic rely entirely on luck though. If you have no way to tell which fruit are safe you basically have to just guess. If two players are equally skilled in the game the player that is the better guesser is going to win the game.

With basically only three mechanics in Fruit Ninja: Slice of Life, it shouldn’t surprise anyone that the game is really easy to play. The game takes just minutes to explain to new players. The game has an age recommendation of 5+ which seems appropriate. Younger children might have some trouble recognizing which fruit they have to flip over but otherwise the game is really self explanatory.

Component wise Fruit Ninja: Slice of Life is pretty typical for a Mattel game. I wouldn’t say the components are great but they aren’t bad either. The plastic components are solid even though I think the game could have made it easier to tell the bombs apart from normal fruit. The game includes plenty of cards as you should be able to play several games before having to repeat cards. Having to repeat a card isn’t that big of deal anyway. I do think the cards could have made the fruit a little larger though as some of the smaller fruit are sometimes hard to see on the cards.

I really can’t say that there is anything terribly wrong with Fruit Ninja: Slice of Life. The biggest problem I had with the game is that the main mechanic of the game just feels kind of pointless. Using the swords to flip over fruit feels like a waste of time. I prefer other similar speed games because they get right to the point. You notice which items are different and then perform a simple action to indicate your answer. Using a sword to flip over fruit just feels overly complicated and misses the point of the game. I can see younger children having a lot of fun using the swords to flip over the fruit. There are much better speed games out there for adults though.

Should You Buy Fruit Ninja: Slice of Life?

As a whole there is nothing terribly wrong with Fruit Ninja: Slice of Life. The game is really easy and quick to play. It takes a typical speed game and adds a dexterity element as you have to flip over the fruit with a sword. I think younger children could really enjoy this mechanic but most adults will probably think it is pretty pointless. Add in that the bombs just add luck to the game and there are just better speed games out there for older children and adults.

If you would like to purchase Fruit Ninja: Slice of Life you can find it online: Amazon

Disney+: The Complete List of Films and TV Shows Available on Launch Day