To begin the game the two sequence of ingredient cards are separated from the other cards and are placed on the table to be used as a reference by the other players. The rest of the cards are shuffled and are all dealt out to the players. In a two player game two extra hands are dealt and in a three player game one extra hand is dealt. These hands are not used and are set aside so the players are never sure what the other players have.

Each player then takes turn playing ingredient cards face down on the table. The ingredient that must be played on a turn follows this sequence: potato, tomato, sausage, onion, carrot, cabbage, peas. Once a player has played peas, the next player starts again at potatoes. So for example on the first turn, the first player plays two potatoes. The next player plays one tomato and so on. 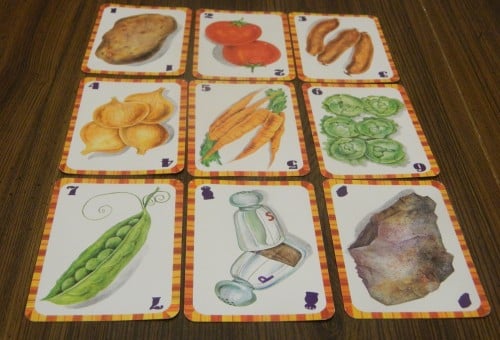 Pictured above are the various types of cards in Stone Soup.

If a player has one of the salt shaker cards they can play the card instead of taking their turn. They show the card to all of the other players and then add it to the pot. Play continues to the next player with that player being forced to play cards of the ingredient the previous player had to play.

For the most part, that is how the game is played. A player can either decide or may be forced to bluff in the game though. A player can bluff in a couple different ways. 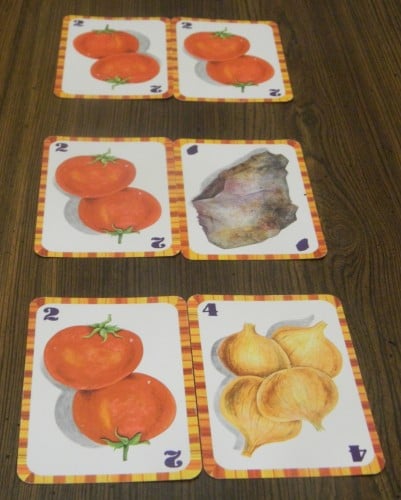 Calling a Bluff And Penalties

Since a player is allowed to bluff in the game, any of the other players are able to call them out on their bluff. If another player thinks that the current player is lying they can challenge them. Once a player has been challenged one of three things can happen.

Whichever player is first to get rid of all of their cards ends up winning the game.

Stone Soup is a card game created in 1996 by GameWright. It is based off the folk tale of the same name.

Looking at the box and the general description of the game you would assume that the game is a children’s/family game. For the most part I would agree with you. The game is simple to learn and easy to play. The game has a recommended age of 8+ which seems pretty accurate. I actually think some children younger than eight would be able to play the game as long as they would be able to keep track of which ingredient they were required to play and they had decent counting skills.

While Stone Soup is made for families, it may not be right for every family. Since the game relies pretty heavily on lying/deceiving, parents  with younger children may want to avoid the game if they are afraid that it may teach their children that lying is inappropriate.

In general children’s/family games are not particularly entertaining for adults. That is why I wasn’t expecting a whole lot from the game. I have to say that I was actually pleasantly surprised by the game. Stone Soup is not a highly original game. There are plenty of other bluffing games out there and quite a few of them are probably more fine tuned and have a lot more strategy than Stone Soup.

For some reason though I actually had a decent amount of fun playing the game. I would consider Stone Soup to be a good introductory game to the bluffing genre. If you are either playing with younger children or adults who don’t play a lot of board games, Stone Soup would be a good bluffing game for your group. Even with there being better options available, most adults who enjoy bluffing games should get at least some fun out of the game.

If you are a bad liar you will have trouble playing the game well. The only real strategy you can employ to try and help yourself is to try and remember what everyone else has. If you can remember what everyone else has, you know what the max number of an ingredient you can declare without totally tipping off your bluff. For example if you know one of the other players has two potatoes you better not declare more than two potatoes since there are only four total potatoes so the other player will know that you are lying.

If you are bad at detecting other players’ deception you are in trouble as well. In the games I played I was really bad at reading people and I ended up calling people out when they were not bluffing. Therefore I ended up drawing a lot of cards and I had no way of catching back up.

This is actually one of the bigger problems I had with the game. Sometimes the punishments are a little too harsh. The punishments are never equal either. For example early in the game you can be caught trying to sneak in a stone and only face a couple card penalty. Later in the game you could face a 20+ card penalty which will essentially eliminate you from the game.

The problem I have with this is that you can bluff/call a bluff pretty easily early in the game. If you end up being wrong you don’t face much of a punishment. This light punishment makes it beneficial for you to bluff more early in the game. You should probably try to get rid of your stones when the pot is small in case you end up getting caught. Early in the game the cards should also be pretty well distributed so no one should have a lot of one of the types of cards.

This all changes later in the game. Later in the game you need to be very careful when bluffing with a stone or calling someone’s bluff. In both cases if you are wrong you are likely to essentially eliminate yourself from the game. Due to the high risk, players seemed to rarely bluff or call anyone out on their bluffs for fear of having to pick up so many cards. Essentially players only challenged other players when they knew they were definitely bluffing or when they had to in order to stop another player from winning. Bluffing becomes even harder since the cards end up getting bunched up with one player ending up with all of the cards of a particular ingredient. This really causes a problem when a player has to bluff an ingredient that they know another player has all of the cards for. In this situation the player better hope that they has a salt shaker.

Like a lot of these type of games, luck will be a determining factor in the game. Getting/not getting stone cards is one of the main ways luck impacts the game. Getting a stone is never good. If you get a lot of stones you will be in a deep hole which will require some good bluffing to get out of. On the other hand if you don’t get any stones you are in a great position since you may never have to bluff in the entire game.

Luck comes most into play when you get down to your last couple of cards. Generally speaking you need to get lucky that on your last turn you end up getting to play the ingredient that you have in your hand. If this is the case you will automatically win the game. If not you will always get called out by another player since they might as well challenge you since if they don’t they will end up losing anyway. The biggest problem is that it is hard to set it up for the right ingredient to come up for you. You can use a salt shaker to change which ingredient you will get next but another player could just as easily play one as well which will mess up your plan.

I ended up playing the game with three players and while it played fine, I believe Stone Soup is the type of game that is better with more players. I would recommend playing with four or five players. More players is better in my opinion since the cards will be more spread out which means it is harder to determine if someone is bluffing or not. With it being harder to determine if someone is bluffing, it makes it easier to try bluffing which I think will make the game more fun to play. In two and three player games, extra hands are dealt out in order to prevent the players from knowing all of the cards in play but with fewer players the cards tend to get grouped together quite easily and it becomes easier to determine when someone is bluffing.

Finally the components in Stone Soup are what you generally would expect from a card game. The cards are typical cardstock. The artwork is not phenomenal but it does a good job making the cards easy to read and understand. The game also includes a recipe on Sally Sampson’s Stoneless Stone Soup. Unfortunately not having tried the soup I can’t comment on its’ quality. The only significant complaint I had with the components was the reference cards. The reference cards are nice to keep track of which ingredient comes next but for some reason they don’t mention how many of each type of ingredient are in the deck. This would have been helpful since otherwise you need to keep looking at the rules to see how many of each type of ingredient there are in the game.

Stone Soup is a pretty typical family card game. The game is easy to learn and play. I was surprised that the game was actually pretty enjoyable for adults. The game is far from original and there are better bluffing games on the market but I had fun playing Stone Soup. Stone Soup would work great as a bluffing game for families with younger children or adults who don’t play a lot of games. Parents who don’t like the lying mechanic of the game though may want to avoid the game.

[…] while back we took a look at the game Stone Soup. Stone Soup was a pretty average bluffing card game that relied too much on luck. I bring up Stone […]