When you talk about board games, one of the oldest and most popular is Chess. Chess has been around for hundreds of years and is loved by a lot of people. With so many people playing Chess for such a long time, it was bound to have a lot of house/variant rules. While I am not the biggest Chess fan, I will play the occasional game. I have been interested in finding some good variant rules for Chess though to add some interesting twists to the game. I was hoping today’s game Chess on the Loose would have been the game I was looking for since it includes three variant games. Unfortunately due to a reliance on luck and unnecessary mechanics, Chess on the Loose finds a way to make Chess worse.

How to Play Chess on the Loose 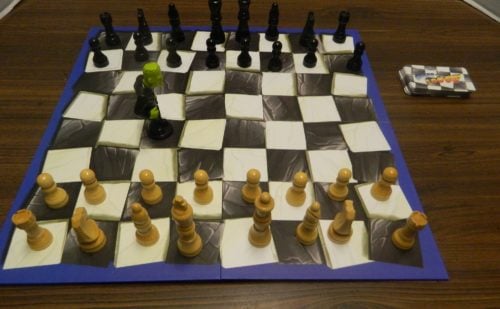 Just like in Chess each player gets to move one of their pieces. After moving a piece the current player will draw the top card from the deck of cards. The Frankenstein piece will move according to what is shown on the card. 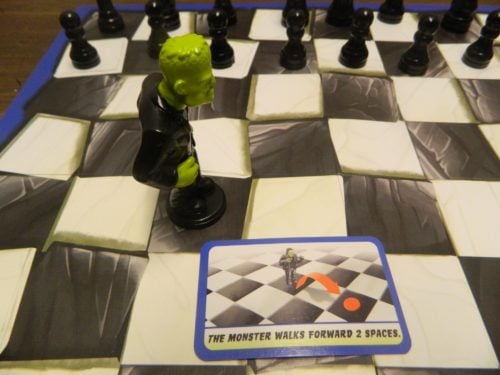 Due to the card that was drawn, Frankenstein will move forward two spaces.

If the Frankenstein piece moves through or lands on a space occupied by another piece, the piece is removed from the board. If Frankenstein captures a piece or has reached the edge of the board, its’ movement ends. 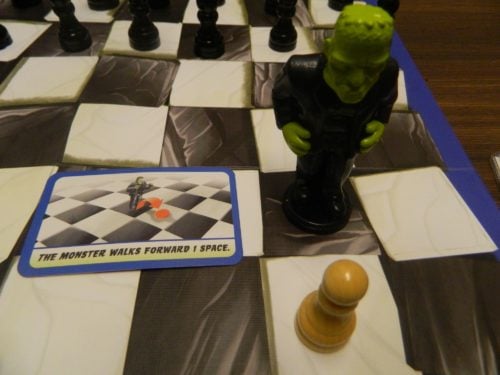 The Frankenstein monster will land on this pawn capturing it.

The game can end in two ways. If one player checkmates the other player, they will win. The game also ends if Frankenstein captures one of the players’ king (the other player wins).

All of the Chess pieces are setup up for a normal game of Chess. The treasure chest tiles are shuffled and randomly placed face down on the eight spaces in the middle of the board. The checkmate tile and the dice are placed to the side of the board. 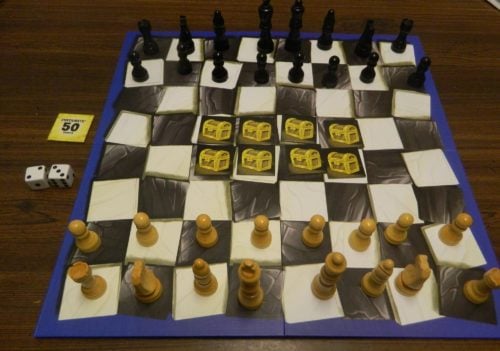 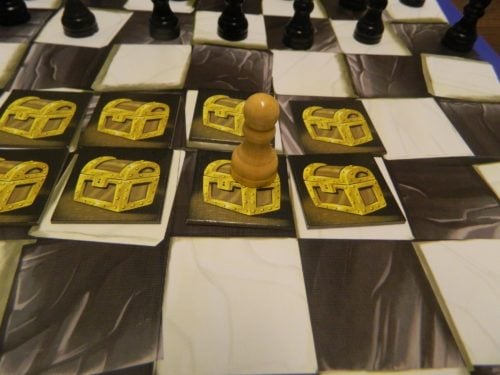 This pawn has landed on one of the treasure chests. One their next turn the player can choose to roll the dice to try and take the treasure. 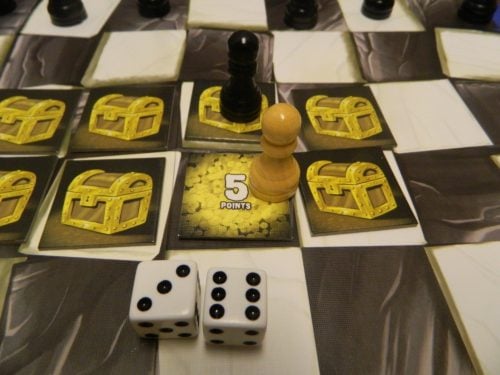 The player has rolled higher than a seven so they get to take this treasure chest.

Treasure Chessed! can end in one of two ways. If one of the players have been checkmated the game ends immediately. The player who has checkmated the other player takes the checkmate tile worth fifty points. The game can also end if all of the treasure tiles have been claimed from the board. Both players add up their points and the player with the most points wins the game. 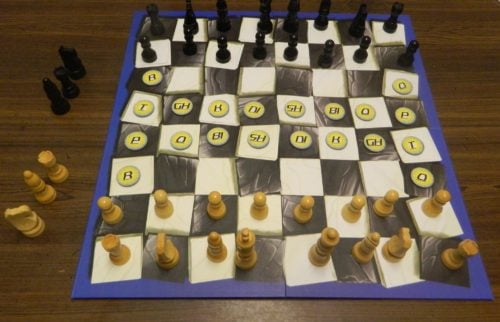 U.F.O. Spell Check is played like normal Chess for the most part. Whenever a piece lands on a space that contains a letter token though, the player that controls that piece claims the letter token. 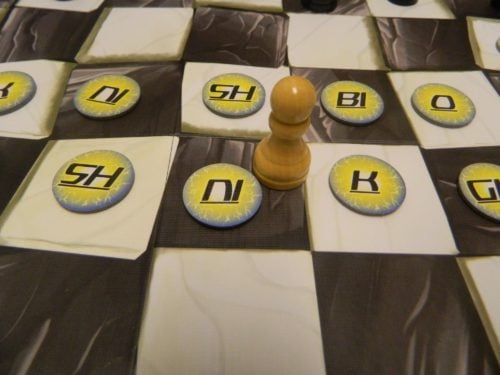 This piece has landed on the space with the “ni” token so they get to take the token.

When a player has the letter tokens necessary to spell “Rook”, “Bishop” or “Knight” they can turn in the tokens to take the corresponding unused piece. The piece is placed on any open space on the player’s back row.

This player has spelled out “Knight” so they get to add a knight piece to their back row of the board.

A player wins U.F.O. Check when they are able to checkmate their opponent.

My Thoughts Chess on the Loose

The main reason I didn’t like Frankencheck is that it took a game that has very little reliance on luck and made it rely heavily on luck. Unless Frankenstein somehow hurts both players equally, it will have a big impact on who wins the game. Instead of a game that relies on skill/strategy, you need to just hope that Frankenstein goes after the other player more than you. This reliance on luck can get so bad that we thought it was going to go straight towards one of the player’s Kings ending the game. Thankfully while Frankenstein causes a lot of havoc, it tends to get stuck in the corners and edges so it its’ impact can be somewhat limited.

The next game that I tried was Treasure Chessed! Basically the premise of Treasure Chessed! is to try and control the middle of the board. Your goal is to try and acquire as much treasure as possible while also capturing your opponent’s pieces. At first I thought this was an interesting idea since it gives you two goals in the game and you have to try and handle both goals at the same time. The problem is that the mechanic doesn’t really add as much to the game as I was hoping. I will say that it does a good job making players more aggressive encouraging them to move pieces towards the middle of the board. For normally cautious players this could tweak how the game plays a little.

The problem with Treasure Chessed! is that it still plays a lot like normal Chess. You are rarely going to win Treasure Chessed! without checkmating the other player. The only way to win without getting the checkmate it to collect almost all of the valuable treasure chests while avoiding the negative treasure chest. Since you can’t see the value of any treasure token, you have to guess really well. This ends up adding quite a bit of luck to Treasure Chessed!. There is not nearly as much luck as Frankencheck but the luckier player still has a much better chance of winning the game.

Possibly the most interesting thing about Treasure Chessed! is the unintended side effect of the treasure chests. While the game plays up that you can win despite being checkmated, I see a lot of games ending before that can even happen. This is due to the game ending immediately if all of the treasures are claimed. This creates an interesting situation if one player has already acquired most of the valuable treasures. That player will likely want to try and collect the remaining treasures in order to end the game early. This will help them win the game without a checkmate if they can avoid getting the negative treasure. I don’t know if it is just me but I think it is a little unsatisfactory for a game of Chess to end before a player is checkmated.

The final game included in Chess on the Loose is U.F.O. Spell Check. U.F.O. Spell Check is basically what you would get if you combined Chess with a spelling lesson. You play a normal game of Chess but if you collect the necessary letters to spell one of the Chess pieces you get to add one of those pieces to the gameboard.

All I can really say about this variant is that it is such a weird twist to add to Chess. The mechanic kind of forces players to be a little more aggressive going after letters but doesn’t impact the game a lot. Of the three games it probably adds the least luck to Chess which is a positive. The problem is that the additions don’t really improve the game. The letters just feel like things to collect that distract you from actually playing Chess. This mechanic just makes Chess longer as there are more pieces to capture/keep track of.

I think Chess on the Loose’s one redeeming quality though might be that it can be used to get children interested in Chess. While Chess on the Loose doesn’t simplify Chess, it may make the game more appealing to children. While Chess is a solid game, I can see it not appealing to a lot of children. The game relies heavily on strategy so if you don’t care about the strategy Chess can be kind of boring. Adding in the special mechanics from Chess on the Loose might get a child interested in Chess that otherwise would never have wanted to play Chess.

The other reason why I think Chess on the Loose could work well with children is that it actually might make the game more balanced for players of different skill levels. With Chess being a game that relies almost entirely on strategy, the more skilled player is almost always going to win a game of Chess. With the randomness/luck added to Chess on the Loose though, it could make Chess a little more balanced between players of different skill levels. In some games the luck might make the game even more unbalanced but it could also make it so a parent doesn’t have to purposely sabotage their own game so their children can win.

Before wrapping up the review I would like to briefly talk about the game’s components. Overall I would say the components are solid. The Chess pieces are made of wood. They are far from a high quality Chess set but they are better than a plastic set. The Frankenstein figure is made of a pretty thick rubber/plastic and serves its’ purpose. The other components are made of cardboard. These pieces are serviceable but I wish they were a little thicker.

Should You Buy Chess on the Loose?

I have been looking for some good Chess variants for a while but unfortunately Chess on the Loose was not what I was looking for. The problem with Chess on the Loose is that the new mechanics added to Chess mostly just add luck to the game. They mostly feel like a waste of time as they don’t add much to Chess and just distract from the best elements of normal Chess. I just don’t see Chess on the Loose really appealing to Chess enthusiasts. I can see the game working pretty well as an introduction to Chess for younger children though. It doesn’t simplify the game but it might make Chess more interesting for children which might eventually get them hooked on normal Chess.

If you would like to purchase Chess on the Loose, you can find it online: Amazon

If you're still looking for an interesting variant of Chess, I would recommend trying out 3-man chess. The rules are the same as normal chess, except for the additional player and misshapen board to accommodate them. What makes it very interesting though is there is only one winner, so there is a big element of unspoken teamwork and backstabbing that happens. I also find it a great leveller. It requires street-smarts as well as intelligence and forward-thinking, and the ability to switch tactics on a dime. You can go from attacking another player to defending them very quickly, and go from hunter to hunted equally as fast.