When I was a kid one of my favorite board games was Guess Who?. I couldn’t even tell you how often I played the game. While I still have fond memories of the game from my childhood, when you grow up you start to notice some of the problems with the game. The main problem with Guess Who? is that once you figure out the best strategy, it takes something away from the game. As I have always liked the underlying mechanic of the game though I have been looking for a game that would fix this problem with Guess Who?. In the past I looked at Guess Who? Mix ‘n Mash which added some unique ideas to the game which fixed some of the problems but still left some issues. Today I am looking at Electronic Guess Who? Extra which takes the original game, adds an electronic component and includes four different ways to play the game. Electronic Guess Who? Extra improves upon the original game by giving you more variety but it still suffers from a lot of the problems of the original game.

How to Play Electronic Guess Who? Extra

There are four different games that you can play with Electronic Guess Who? Extra. This section will explain the rules for classic Guess Who?. Any additional rules needed for the other three games will be presented in their sections.

On a player’s turn they ask the other player any question that can be answered with a yes or no. The other player answers the question based on the character they chose at the beginning of the game. Instead of saying out loud yes or no, the player will press the green button for yes and the red button for no. There is a variant rule where if a player answers without pressing the button, the other player automatically gets a point. Based on the answer that a player receives, they will close the gates on the bottom of their side of the board covering up the characters that the player has eliminated due to their question. 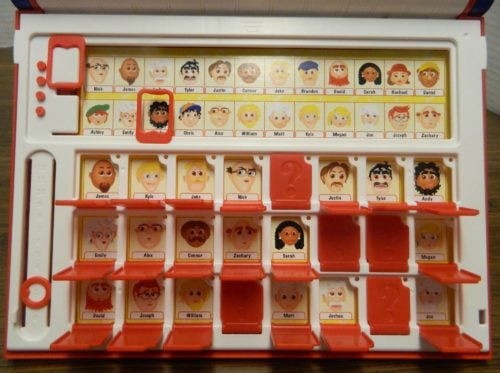 The next player then asks their question. 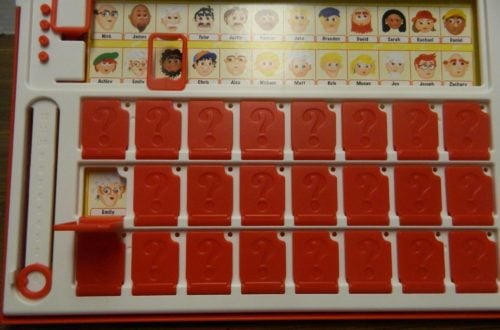 This player has eliminated all but one of the characters. If the other player selected Emily for their character, the red player has won the round.

If neither player has earned enough points to win the game, another round is played.

Before you begin a round each player uses their pegs to make three guesses at which character they think the other player is going to choose. To make a guess a player places one peg next to the corresponding picture on the bottom of the board. 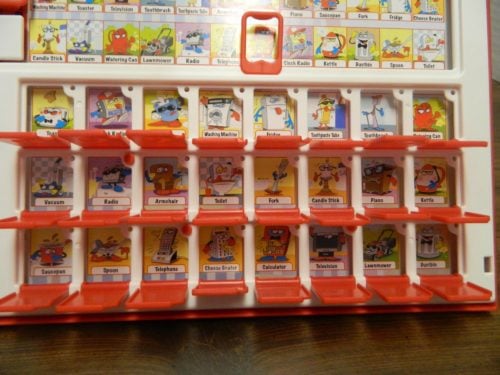 For this wild guess round the player has put their pegs on the radio, telephone and television characters.

At the end of the game both players check to see if one of their wild guesses were correct. If a player guessed correctly they will score one extra point no matter if they won or lost the round.

In this game you will be playing against the timer. Before you start a round press the timer button (middle button) to set the desired time limit:

The color that the timer button is flashing determines whose turn it is. The game ends when either a player has successfully guessed the other player’s character or both players have run out of time. If both players run out of time, the players will take turns trying to guess the other player’s chosen character. The players will get up to three guesses. The first player to guess correctly wins the round. 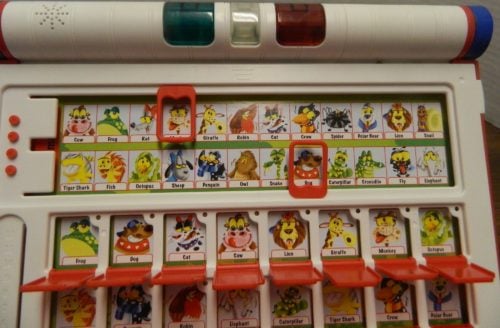 This player has chosen to select the monkey and dog character for this round of Guess Who 2.

The first player to score twelve points wins the game

My Thoughts on Electronic Guess Who? Extra

When you look at Electronic Guess Who? Extra you will immediately notice that the game is basically the same as the original Guess Who with a few tweaks. The game still uses the same mechanic of asking yes or no questions in order to eliminate suspects. Basically if you have ever played Guess Who? before you should already have a good idea of what to expect out of Electronic Guess Who? Extra. The game is still a light deduction game where you need to use smart questions in order to narrow down your potential suspects. If you already know how to play Guess Who? you will only have to learn the slight twists added for the three alternative games. If you have never played the game before it only takes a couple minutes to learn.

Instead of wasting time talking about the main mechanics that almost everyone is familiar with, lets instead talk about what is unique in Electronic Guess Who? Extra. Probably the biggest addition to the game is the idea of having four different ways to play the game instead of the one way in the original game.

The first two games (Guess Who? Original and Guess Who? Wild) are basically the original game. Guess Who? Original is played exactly the same except that you use the electronic component to answer and you will be using different characters from the original game. All Guess Who? Wild adds is a mechanic where you try to guess what character the other player is going to pick before the game begins. Unless there is a character that you know the other player will pick or you can read them well, this ends up being a complete guess. Guess well and you receive an extra point. Good luck guessing right as my three guesses were all eliminated within two or three questions. I can’t say that I am a big fan of this mechanic as it just seems to add more luck to the game.

The third game Time to Time is not much better in my opinion. Time to Time is basically Guess Who? played with a timer. At first this actually sounded like a good idea. By adding a timer mechanic it would force players to come up with their questions quicker. Instead of trying to find the ultimate question players need to quickly come up with a question so they don’t waste too much time. This eliminates some of the analysis paralysis and stops players from coming up with questions that kind of ruin the spirit of the game.

The problem with Time to Time is that the timer doesn’t really work with how the game is played. I found the game to be a little stressful as you had to come up with a question and then cover up characters as quickly as possible. You are regularly forced to cover up characters while answering the question asked by the other player. There is just too much going on at a time which doesn’t lead to a very fun experience. The benefits that the speed element add to the game are offset by the problems that it introduces to the game.

The final game that Electronic Guess Who? Extra adds is Guess Who 2. Basically Guess Who 2 is the same as normal Guess Who? except that the players are trying to guess two characters at the same time. This might not sound like much but it adds a lot more to the game than you would expect. Having to come up with questions that give you useful information for two different characters takes some work. You need to be careful when asking questions so you don’t make a false assumption. This variation actually eliminates quite a few of the problems from the original Guess Who? as you can’t really use the same winning strategy as efficiently. I think Guess Who 2 actually adds quite a bit of strategy to the game. After playing with this variant I don’t know if I would ever want to play with the normal rules ever again.

Other than adding three additional variant games, the other major addition to Electronic Guess Who? Extra is the fact that the game comes with six different sets of characters to play the game with. Of all of the additions to Electronic Guess Who? Extra I think this is the one that makes it better than the original game. It mostly just adds more variety to the game but I think that is a good thing for a game like Guess Who? If you just use the same characters all the time, you eventually are going to have a good idea of what questions to ask. Being able to change the characters forces players to come up with different questions.

Depending on which version of Electronic Guess Who? Extra you purchase, the character sheets you get seem to differ. In the 2008 version of the game you get three sheets that contain humans along with a sheet that contains monsters, animals and household items. While the three people sheets don’t differ a lot from the original game, they still add some variety. The more interesting sheets are the monsters, animals and household items as the type of questions you have to ask differ quite a bit from what you would ask for human characters. They don’t drastically change the gameplay but they are a nice change of pace.

As far as Electronic Guess Who? Extra’s components they are actually better than I was expecting. I will say that the electronic component is pointless for the most part. The only reason to even use it is for the timed game as otherwise it only adds sounds to the game. If you don’t care for the timed game or don’t need the sounds, there is no reason to even use it. As I already mentioned I really liked the idea of adding multiple different character sheets. The game also eliminates the need to have to take out all of the picture cards from the gameboard as you just slide in the new card and you are ready to play. I also like that the game is quite portable. The gameboard acts as its’ own case so you just seal the case and then can take it anywhere.

Should You Buy Electronic Guess Who? Extra?

While Electronic Guess Who? Extra is not a perfect game, I think it is a pretty obvious improvement over the original game. For the most part the gameplay between the two games is exactly the same. Electronic Guess Who? Extra differs from the original game in two important ways. First it adds four different games that you can play. Two of the games are basically the same as the original game. The speed game doesn’t really work as it gives you too many things to worry about at the same time. I really liked the Guess Who 2 game though which is basically Guess Who? where you have to guess two characters at the same time. The other major addition to the game is the fact that the game comes with six different character sheets which add quite a bit of variety to the game. I especially liked the cards that feature things other than humans as it forces you to ask unique questions.

If you would like to purchase Electronic Guess Who? Extra you can find it online: Amazon

This Game is Bonkers Board Game Review
Click here to cancel reply.

Hi I have some pieces missing and would like to be able to fix up the game. Could you pls give me a name, number or email I can get these missing pieces from. Thankyou

Unfortunately I won't be able to help you much with finding replacement parts for Electronic Guess Who? Extra as I don't work at Hasbro and don't have any contacts at the company that could help you with replacement parts.