If you grew up in the 1980s or later you probably grew up with the board game Guess Who. Guess Who was first created by Ora and Theo Coster in Great Britain in 1979 and it was brought to the United States in 1982. For those of you not familiar with the game, your objective is to determine the secret identity of the other player before they can guess your secret identity. This is done by asking yes or no questions which will eliminate some of the secret identity possibilities. 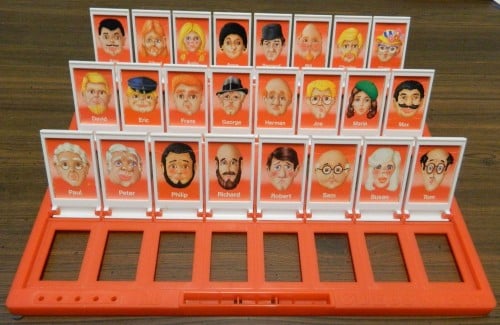 When I was a kid I loved Guess Who and it was one of my favorite board games growing up. As a children’s game Guess Who is a good game because it is easy to play and teaches kids deductive reasoning. It is easy for children to ask questions like does your person have glasses or do they have yellow hair? When you play the game as an adult though you will realize that you were playing Guess Who the wrong way if you wanted to increase you chances of winning.

So I am going to show you how to play Guess Who the advanced way which can significantly increase your odds of winning the game. Please note that after you know the advanced strategies, Guess Who does lose some of its’ charm so you have been warned.

How to Regularly Win At Guess Who

Reading the instructions to Guess Who actually leads you to play the game in a less optimal way. The instructions give the players some sample questions that they can ask the other player. These questions are usually involve asking if the person has glasses, has a hat, has yellow hair, etc. This is a valid way of playing the game and you can actually win really quickly if you end up picking the right characteristic. As a matter of fact you can win the game in two turns if you get an answer of yes to either of the following questions (at least in the 1982 version of the game).

Guess Who only has one black person (Anne) and one child (Anita) in the 1982 edition. If you ask one of these questions and get a yes answer you will win the game unless the other player somehow does the same. The problem is that 23 of the 24 people don’t have these characteristics. This means that 23 out of 24 times you won’t be right and will only eliminate one possibility.

This shows the biggest problem with using traditional questions in Guess Who. The game was designed so you likely would only eliminate a couple people with each question. Almost every obvious characteristic in the game has a 19/5 split. Nineteen characters have one characteristic while five characters have the opposite characteristic. For example there are five females and nineteen males, five people wear glasses while nineteen don’t, five people wear hats, etc. By asking one of these type of questions you might get lucky and eliminate most of the people right off the bat but more likely you will only eliminate five possibilities. According to Mark Rober, the typical player usually can win using this strategy within around seven questions. If you use advanced strategies though you are guaranteed to solve the other players identity within five or six turns. While it doesn’t guarantee you a victory, you increase your odds significantly if you use advanced strategies.

So how do you increase your odds of winning Guess Who? First ignore the type of questions presented in the instructions for Guess Who. While these questions can be used later in the game, using one of these questions early forces you to rely on luck to win the game. According to the Guess Who rules the only requirement in asking questions in Guess Who is to ask a question that can be answered with a yes or no. Players also can’t guess a person’s name because if they are wrong, they lose the game.

So with that knowledge in mind you need to realize that there are better and worse questions that you can ask at the beginning of the game. You are going to want to ask a question that tries to eliminate close to half of the people each round. While you can win quicker if you ask a question that eliminates all but five of the people, you are relying on luck being on your side. If you use the strategy of eliminating half the people each round you will go from 24 people to 12, then 6, then 3, then 1 or 2, and then 1.

So how do you ask questions that eliminate half of the people every round? Two basic strategies include using the first letters of people’s names or to ask compound questions that ask for more than one thing. Explanations of both strategies are shown below. Before getting into how to improve your odds of winning the game, lets talk about which secret identities you want to draw at the beginning of the game.

Best and Worst Secret Identities in Guess Who

Lately Guess Who has received some backlash due to having some diversity issues. The game does only include five female characters, and one black character in the 1982 version. This issue has probably been improved in later versions of the game but it is an issue in the original version of the game. While the female ratio was created in order to maintain the 19-5 ratio mentioned above, after looking at all of the characters’ distinct characteristics I have to say that the female characters in the game have an even bigger disadvantage in the game than I originally thought.

If you are playing against a player that is going to ask questions about these distinct characteristics, some characters are better to draw than others since they have less distinctive characteristics. If your opponent uses the advanced strategies presented in this post though it actually doesn’t matter since all of the characters will take essentially the same amount of turns to guess.

Best Secret Identities in Guess Who

Getting one of these characters is also pretty good since they only have two distinctive characteristics outside of hair color and first letter.

Middle of the Road Secret Identities

Worst Secret Identities in Guess Who

If possible these are the identities you want to avoid drawing in the game since they decrease your chances of winning the game against a player not using an advanced strategy.

It is not great to draw one of these characters since they have six distinct characteristics that will make it easy to guess them. While these characters are not good to draw they are not the worst to draw. 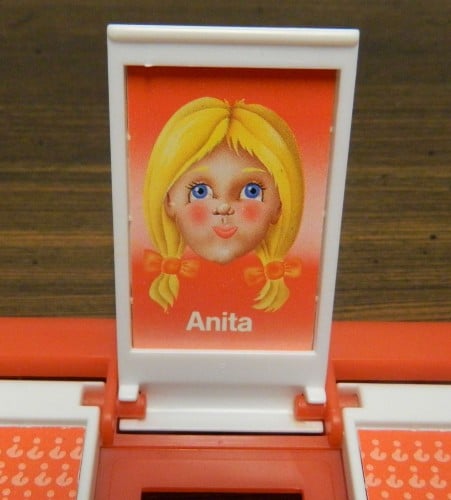 Seven Secret Identity in Guess Who

Anita is the worst secret identity to draw in the original Guess Who because she has seven distinct characteristics in the game. Using a traditional strategy Anita has the best chance of being guessed early in the game. As I mentioned earlier Guess Who has been accused of being racist/sexist and this information somewhat confirms that fact. I doubt the game was purposely made in this way but statistically you are better off not being one of the female characters in the game because five of the seven characters with the most distinctive characteristics are females. If your identity is one of the women you have worse odds of winning the game.

After asking three questions involving letters you most likely will have to switch to using other characteristics such as Man/Woman, hair color, etc. Following this strategy you will only need five questions to determine the identity 1/3 of the time or will figure it out in six questions 2/3 of the time. 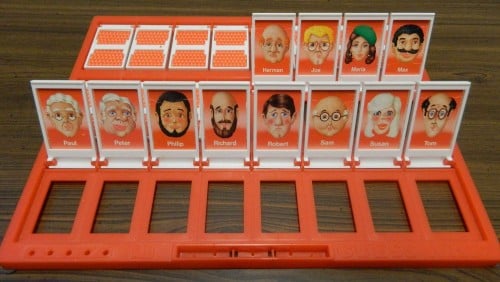 Using the letter strategy you are guaranteed to eliminate half of the characters with just one question.

Below is an example of questions you could ask using this strategy. This list first shows the question asked and then the results from a yes or no answer. The last two questions asked in each path can be changed and won’t affect how many turns it takes to figure out the player’s identity.

For this strategy you are going to avoid using just one characteristic for your first couple questions. Since you only have to ask a question that has a yes or no answer you can inquire about two or more characteristics at the same time. For example instead of asking if the player has white hair, you should ask if the person has white hair or black hair. If you asked for just white hair you would likely only eliminate five people. Asking the compound question allows you to eliminate ten people or fourteen people. Using this strategy you will solve the identity within five turns 1/3 of the time and within six turns 2/3 of the time.

The best compound question to ask as your first question might be to ask if they have a man-made item on their face (glasses, hats, jewelry and bows). This question is a good first question because you will either eliminate eleven or thirteen people with the first question. Below is a breakdown of how to use this strategy. 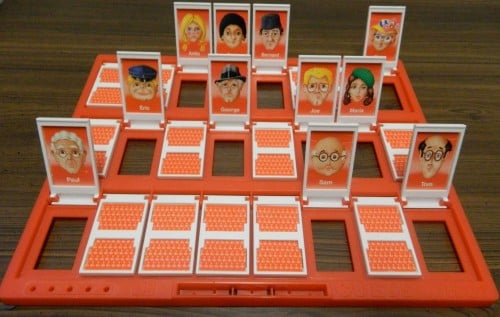 Using the man-made item question you can eliminate 11 or 13 of the people with your first question.

Do you have any memories of the game Guess Who? Can you think of an even better strategy in order to beat Guess Who in fewer turns? Share your thoughts in the comments section.

If you would like to buy Guess Who to try out these strategies for yourself, you can find many different versions of the game on Amazon. Original Guess Who

, Other Guess Who Versions

When I used to play this game, I'd ask questions like the ones on the box. Now I am going to try and ask about the man-made items, and if they have a big nose. Is it worth it to ask if they are male or female?

Statistically it usually isn't great to ask male or female early in the game as there are significantly more male characters than female characters in the game (at least in the older versions of the game). If the other player's character is a male it won't help you a lot because it won't eliminate many characters. If their character is a female though it will help a lot as you will immediately eliminate a large majority of the characters. Early in the game asking male or female is a very high risk reward question. In most cases it won't help much, but in certain situations it will help a lot.

Statistically you are best off trying to ask a question that will eliminate close to half of the characters no matter if you receive a yes or a no. If you consistently do this you can win within around six questions no matter what you ask. If you choose to ask questions that have more characters that correspond to one of the answers you have the possibility to get rid of a lot of characters quickly, but you have a better chance of only being able to get rid of a few characters.

letters and combined questions are not in the spirit of the game.

I agree that using letters and combined questions are not in the spirit of Guess Who. If you are really competitive and don't care about following the spirit of the game though they make it much easier to win the game.