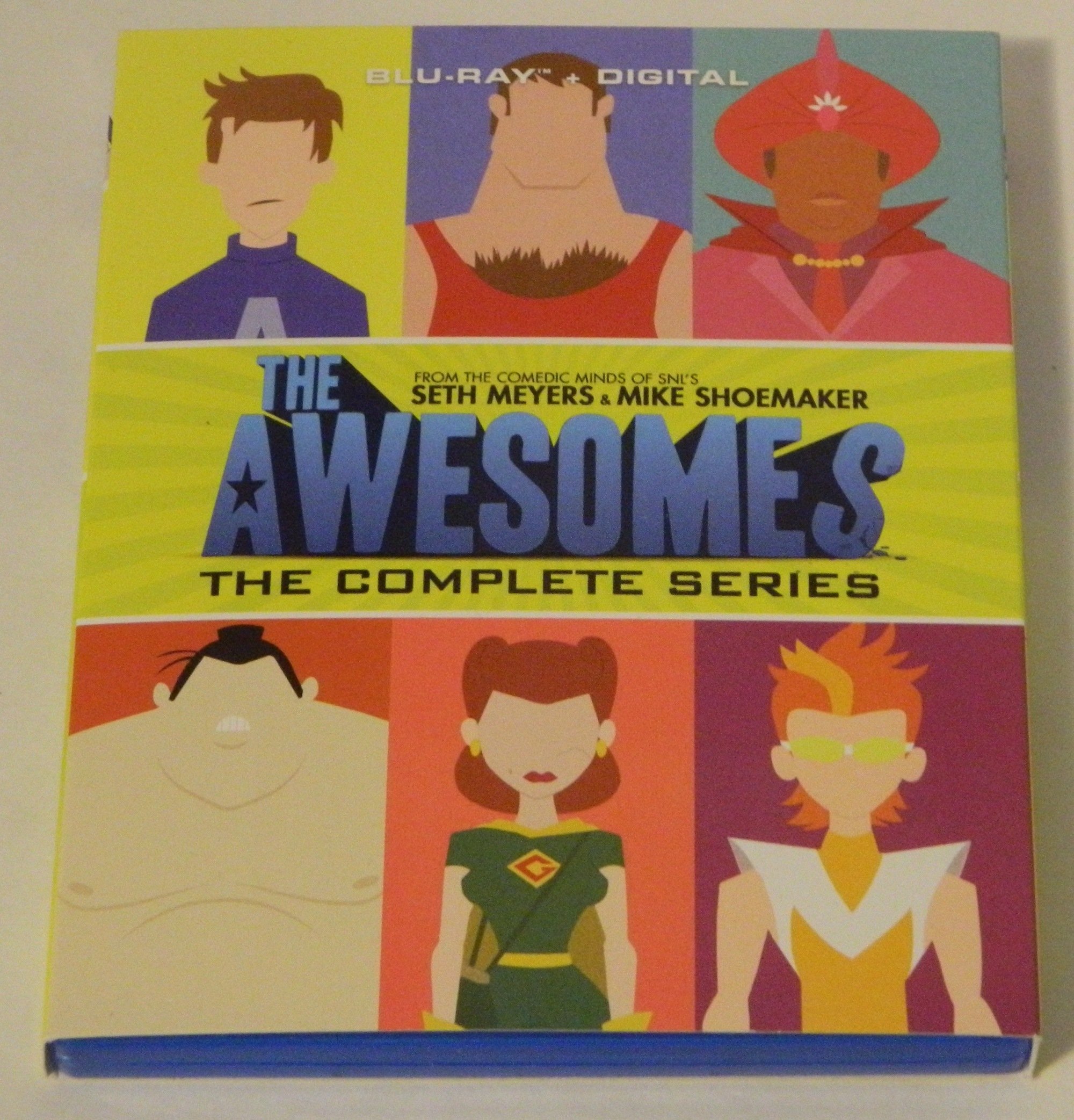 With superhero films dominating the box office for the last decade, it isn’t that shocking to see TV networks try to get a slice of the action. One such attempt was The Awesomes, an animated superhero comedy series which was also one of the earliest Hulu original programs to hit the streaming network (way back in August of 2013). While the series had a solid three-season, thirty-episode run, it must never have gained a huge following or it would likely still be being produced. Hopefully now that The Awesomes: The Complete Series has been released on Blu-ray and DVD via Mill Creek Entertainment, more people will give this entertaining series a chance as I feel it was vastly underrated during its run on Hulu. I wouldn’t consider it a must-watch for all audiences but fans of animated comedies and comics (especially those who love both) should certainly give it a try.

The Awesomes is an animated superhero comedy series that at times comes very close to being a parody of Marvel and DC Comics characters and stories. The series follows a group of new superheroes who take over the legendary superhero team The Awesomes after their leader leaves the team (which causes the rest of the team members to disband the organization). The main character and new leader of the team is Prock, the son of the former team leader who isn’t very super himself. His only superpower is the ability to stop time for ten seconds to come up with a plan. What he lacks in superpowers, he makes up for with his brains and leadership abilities. The rest of The Awesomes team members include: Muscleman (Prock’s childhood best friend who has superhuman strength and invulnerability), Frantic (a hyperactive speedster), Gadget Gal (an original member of The Awesomes who rejoins the team after a rejuvenation ray turns her into her twenties again), Impresario (a man with the power to conjure anything he wants but whose mama issues causes the things he conjures to always have his mother’s face and voice), Sumo (a young boy who turns into a sumo wrestler when angered), and Hotwire (Prock’s romantic interest whose power is manipulating electricity). Other important characters include Concierge (the team’s secretary who tags along on most missions), Perfect Man (an arrogant former member of The Awesomes who has since gone solo), and Dr. Malocchio (the team’s supervillain rival). Most episodes feature a different superhero trope. For example, in one episode the team is sent to an alternate version of Earth where every superhero is a supervillain and vice versa. The main story of each episode is usually wrapped up at the end of the episode but there are serialized elements and oftentimes cliffhangers at the end of the episodes.

I wouldn’t exactly call The Awesomes an edgy cartoon like South Park or Rick & Morty, but it is certainly aimed at adults. All of the swearing is bleeped out (this may be an unpopular opinion but I personally think bleeps are funnier than the words themselves) but there are still plenty of risque jokes that make this show unsuitable for families. It isn’t nearly as dirty as some other animated series though so it might be fine for older teens.

Unlike certain other animated comedies (*cough* Family Guy *cough*), most episodes of The Awesomes actually have interesting plots that aren’t just a vehicle to deliver random jokes. While the show is funny as well, the serialized stories are one of the things that really helps The Awesomes stand out from the pack. This isn’t a 100% comparison but I do see a lot of Rick & Morty in The Awesomes (even though this series was actually released a few months before that smash hit). The jokes are somewhat similar and the show does the same thing Rick & Morty does for sci-fi tropes and stories to superhero stories, taking an idea from the world of comics to parody but eventually finding its own unique story to tell in each episode.

However, there are still plenty of jokes packed into every episode. I found myself mostly laughing at the parodies of comic book heroes, villains, and tropes like Brains & Brawn (Prock and Muscleman’s teenage crime-fighting team). The supervillains are usually some of the most inspired parodies. The Awesomes are pitted against such ridiculous supervillain teams as The IT Department and the Animal Kingdom (cute Care Bears-like animals bent on world domination). Each episode in season one ends with a product placement ad for Jack Link’s Beef Jerky. I’m usually not a fan of product placement (though I don’t mind them if they aren’t super obvious) but The Awesomes does a great job with these. In fact, some of these Jack Link’s ads are the highlight of the episode. You know the Jack Link’s ad is coming, you just have no idea how they are going to tie it in to the joke. They are such great comedy fodder that I was actually disappointed that they were discontinued in season two. Anybody working on comedies that use product placement should watch this show to see how it should be done.

The Awesomes: The Complete Series was released on both Blu-ray and DVD at the same time. I received the Blu-ray for review and I must tell you, the show looks very good in high-definition. At least in my book, animation is one of the genres that benefits the most from the upgrade to Blu-ray and this series is no exception. While I don’t have the DVD version to compare it to, the colors are sharp, the animation is pretty good (especially for a show that probably didn’t have a huge budget), and there are really no issues whatsoever in the video or sound categories. A few bonus features (all of which are trailers, promos, and other similar things) are included, none of which are amazing but they do add a tiny bit of value to the set. I do kind of wish a few meatier extras were included but for a cheap complete series set, I’m not going to be too demanding when it comes to the bonus features.

If you are into superhero films and/or animated comedies, please give The Awesomes: The Complete Series a shot. While the series isn’t perfect, it was a very pleasant surprise to me. The plots are interesting and there are plenty of laughs to go around as well. The series also looks awesome on Blu-ray. Highly recommended for all superhero and animated comedy fans, recommended for everyone else.

The Awesomes: The Complete Series was released on Blu-ray on June 5, 2018.