One of the more popular types of party games is what I like to call the Scattergories genre of games. Like the party game Scattergories, the players are given a category. All of the players try to write down as many answers that they can that match the category they were given before time runs out. Players score points for coming up with answers that none of the other players were able to come up with. While I enjoy this type of party games, the genre is not the most original. In the past we have looked at Like Minds, Picture Picture, Scattergories Card Game, and Scrutineyes. Each game has its own unique twist but the games do share a lot in common. This is the main concern I had going into playing Commotion. Commotion is a fun little party word game that has some interesting ideas and yet it is not particularly original.

How to Play Commotion

Commotion is played in three rounds. At the beginning of each round, all of the players attach one card to their gameboard without looking at it. The player in charge of the timer then sets it to the desired amount of time. The instructions recommend to the mark on the timer which is 25 seconds. When everyone is ready, the timer is turned on and the round begins.

Each player looks at their category card. They will try to write down as many things as they can that match the category on the top sheet of paper on their game board. When the timer runs out each player must stop writing down additional answers.

All of the players then pass their game boards to the player on their left. The timer is reset and each player tries to write down answers for their new category. Players should try to avoid repeating answers written by a previous player. When the timer runs out the game boards are passed again. This continues until each player gets back the gameboard they started the round with.

After everyone has had the opportunity to write answers for each category, the players score each card. The answers are read from the top to the bottom. For each correct answer that a player supplied, they will receive one point. Any duplicate answers only give a point to the first player who came up with it. If there are any questionable answers, the players vote on whether they should count. All scores are recorded on the score sheet. 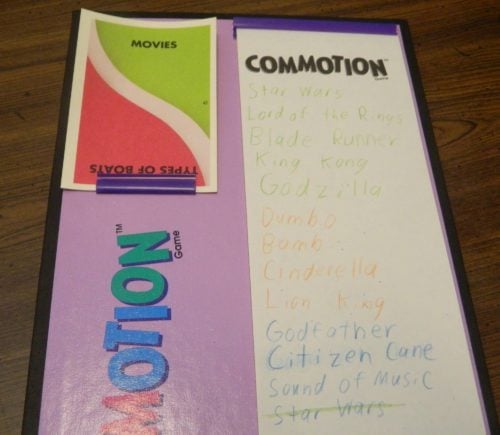 For this category card players had to write down movie titles. The green player wrote down five movies so they will score five points. The orange player will score four points. The blue player will only score three points as they duplicated an answer provided by one of the other players.

After scoring is completed, a new round begins. A total of three rounds are played.

After the three rounds are played, the players will compare their scores. The player who scored the most points wins the game.

My Thoughts on Commotion

Commotion might not play quite like Scattergories but I think the comparison is warranted. In Scattergories players roll a letter die and then try to write down words for a set of categories that start with the letter that was rolled. In Commotion you are given a category and you try to come up with as many answers as you can that fit the category. In both games you score points for coming up with unique answers. The two games go about it in different ways, but the end goal of the two games are very similar. Both games are about coming up with answers that fit a category as quickly as possible.

I would say the main difference between the two games is an emphasis on quantity versus quality. I see Scattergories as more of a game of providing quality answers. As you are given a certain letter that you have to use, there are a limited number of answers for most of the categories. Some of the categories may have none or only one valid answer. In situations where there are several valid answers though, you want to try and come up with the least obvious answer. Using the most obvious answer will most likely lead to you scoring no points as another player will likely come up with it as well. In Scattergories there is some value in taking some time to try and come up with non-obvious answers.

In Commotion the goal of the game is quantity. As there is no letter limitation, players can write down any answer that fits the category. You don’t want to waste time coming up with obscure answers as you are better off just writing down as many answers as you can think of. There is no penalty for writing down invalid answers or even writing answers that other people have already wrote down. It is quite a bit easier to come up with valid answers in Commotion, so the game rewards players who are able to come up with a lot of answers quickly. In a lot of rounds players will be frantically writing down as many answers as they can until they run out of time.

The instructions for Commotion recommend that players start each turn by checking what other players have wrote down. If the list is really short it may be worth it to quickly review all of the previous answers so you don’t provide duplicate answers. If the list is long though, you are better off spending your time just writing down answers and hope you write down things that the other players didn’t come up with. Time is precious in Commotion. For a lot of the categories you will come up with plenty of answers so your success mostly comes down to how fast you can write them down. Thus you are usually better off using your time writing answers instead of wasting time reading the previous answers.

The other main difference between Commotion and games like Scattergories is that there is a little more interaction in Commotion. In Scattergories everyone makes their own list and then compares them at the end of the round. In Commotion each category card has its own list. The players take turns with each category card trying to add additional answers to the end of the list. The game is actually quite clever by having each player use a different colored pencil to distinguish their answers. As everyone is using the same list, you don’t have to worry about coming up with unique answers. You just have to be the first to provide the answer.

On the skill/luck spectrum I would say that Commotion is an equal blend of both. There is a decent amount of skill to the game. Players who can quickly think of things that fit the category are going to have an advantage in the game. This is especially beneficial later in a round as most of the obvious answers are already taken. There is also something to be said about writing quickly. There will be categories where you will be limited by how quickly you can write. Some categories have so many potential answers that the number of points you will earn will depend on how fast you can write. Players who are generally good at these type of games are going to have an advantage in the game.

There is some reliance on luck though. This mostly comes from which category card you are dealt along with the turn order. Simply put, all of the cards in the game are not equal. There are some categories that have a limited number of possible answers and other cards that have thousands of answers. If you get one of the cards that have a limited number of responses, you can check off almost all of the answers before the other players even have a chance. Starting with one of the cards with a lot of answers could also be beneficial though. If you can write fast you can score a lot of points quickly and eliminate all of the easy answers for the other players.

Turn order can also play a pretty big role in the outcome of the game. If all of the players are not evenly skilled, some players are going to be at a disadvantage. If you are seated to the left of the worst player, you are going to have an advantage in the game as they will miss answers that you can then pick up. Sitting to the left of a good player will leave you few remaining answers which is going to make it harder for you to score points. The best player is going to win Commotion most of the time, but luck will play a role some of the time.

As far as Commotion’s length I have mixed feelings. The length of the game is dependent on the number of players. As each additional player adds another category card to each round, the more people you play with the longer the game is going to last. As far as how long to set the timer for, I don’t really agree with the game’s instructions. The game recommends 25 seconds for each category card. I personally would recommend using the full sixty seconds as it gives players more time to come up with answers and thus increases scores. With these two factors in play, the amount of time you will spend playing the game is going to vary quite a bit. If you play with six players and a one minute timer, the game is probably going to take around 45 minutes which is about right. With four or less players though, I would probably recommend playing an additional round or two as the game feels like it ends a little too quickly.

Commotion’s components are basically what you would expect from this type of party game. The game includes 200 cards which is not terrible as each card has two categories on it. You can play around 20-60 games before having to reuse cards. I would have preferred more cards but you can easily create your own cards or take cards from a similar game. The timer works pretty well. I actually really like the game board design as you slip the category card right next to the sheet of paper with the current list. The biggest problem with the components is that they are just kind of dull. The game doesn’t have much artwork. Basically the game’s components serve their purpose but don’t do much else.

Should You Buy Commotion?

Commotion is a very solid party game. The game shares a lot in common with games like Scattergories where you are trying to come up with as many answers as you can that fit a category. It has a few small tweaks that somewhat distinguish it from other games in the genre though. Unlike other games in the genre, Commotion favors writing down as many answers as you can. While it plays a little different than the other games from this genre, no one is ever going to consider Commotion to be a highly original game. I still had fun playing Commotion though.

If you would like to purchase Commotion, you can find it online: Amazon