To set up the game take one of the “I Know” cards and place it in the center of the playing surface. Place the other “I Know” card in the box. Shuffle the letter and category decks separately and place them face up in the center of the table. Take a card from each deck and place it face down on the top of its’ corresponding deck so no card’s text is currently visible. When everyone is ready flip over both cards.

The object of the game is to come up with a word that matches both the letter and category card that are currently at the top of the decks. For example if the top two cards are “A Sport” and “F”, a correct answer could be “football”. When a player has come up with a word that matches both cards they need to slap the “I Know” card and yell out “I Know”. If multiple people slap the card at the same time, the player whose hand is on the bottom gets to answer first. 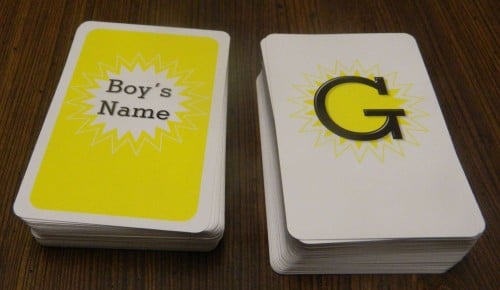 In this situation the players need to think of a boy’s name that starts with the letter G. Some possible answers include George, Greg and Grant. Once someone has answered correctly they can either take the “Boy’s Name” card or the “G” card.

If the other players determine that the answer is incorrect, another player gets to try and provide a correct answer. The incorrect player(s) needs to discard one of the cards they had previously won. A player also loses a card if they take too long to answer or they repeat an answer already given.

If at any point no one can come up with an answer within a reasonable amount of time (instructions mention 30 seconds), the card from one of the stacks is removed and placed in the center of their deck. The players then play with the new letter/category combination.

Once one of the piles run out of cards, the game is over. All of the players count up their cards and whoever has the most cards wins the game.

The main difference is that Scattergories The Card Game is a lot faster paced than the original game. In the original game you were given a set time limit to try and find as many words as you can. You weren’t competing directly against the other players to come up with words quickly. The game was more about coming up with correct answers than coming up with them quickly. In the card game version, the game moves much quicker. You are competing directly against the other players to see who can answer quickest. Quick reaction time is important if you want to win. Some of the card combinations will take a while to come up with an answer but most usually only take a couple seconds.

In addition to being similar to Scattergories, Scattergories The Card Game is essentially exactly the same game as ASAP which Geeky Hobbies reviewed a while ago. Except for having different cards and slightly different rules, these two games are the same. Of the two though I would prefer Scattergories the Card Game for a couple reasons.

First Scattergories has almost twice as many cards in both decks (51 vs 26). This was one of my biggest problems with ASAP since it lead to a lot of repeat letter/category combinations because there were so few cards. While Scattergories The Card Game could have had more cards, the game has enough cards that you won’t have a lot of repeat situations.

I also felt that the Scattergories Card Game was faster paced than ASAP. I attribute this to Scattergories automatically starting a new round as soon as a card is taken by a player. I liked this rule since it kept the game going at a fast pace and didn’t make you have to wait for cards to be flipped over. This rule could easily be adopted by ASAP and the results would be pretty much the same.

One thing that I think Scattergories The Card Game and ASAP both messed up was how to handle the lesser used letters. In ASAP all of the letters got their own card. I didn’t like this idea since it was too hard to find answers for some of the letters. Scattergories takes the opposite approach and eliminates the lesser used letters entirely. This actually eliminates quite a bit of skill from the game since most of the letters in the game provide plenty of options for a correct answer. While I don’t like how either handled this issue, I prefer how Scattergories handled it. I think the best situation though would have been to follow the suggestion I had in the ASAP review and just put all of the difficult to use letters on one or two cards. This would have let the harder letters to be used but you would have some options which would have made it easier.

I did think Scattergories did a good job creating some additional rules that helped solidify the game. First I like that there is a punishment for when you make an incorrect guess. This should help force players to think before just blurting out random answers. I also liked the idea that if you don’t answer right away, you end up losing a card. Without this rule players could easily just slap the “I Know” card and then take some time to think of an answer. With this rule you need to have an answer before “buzzing in”.

My group came up with a better way to deal with ties though. We decided that if multiple players “buzzed in” at essentially the same time, everyone would get to say their answer. Whichever answer was deemed the best would end up getting the card.

Finally the components are what you would expect from a card game. The cards are your typical card stock. The artwork isn’t flashy but it serves its’ purpose. I do like that the game includes an extra “I Know” card in case you either damage the other card from your slapping or you end up losing it.

If you already own Scattergories and enjoy it, your decision on whether to pick up the card game depends on if you want to try the more fast paced nature of the card game. The card game is a unique experience but that might not be enough for all players.