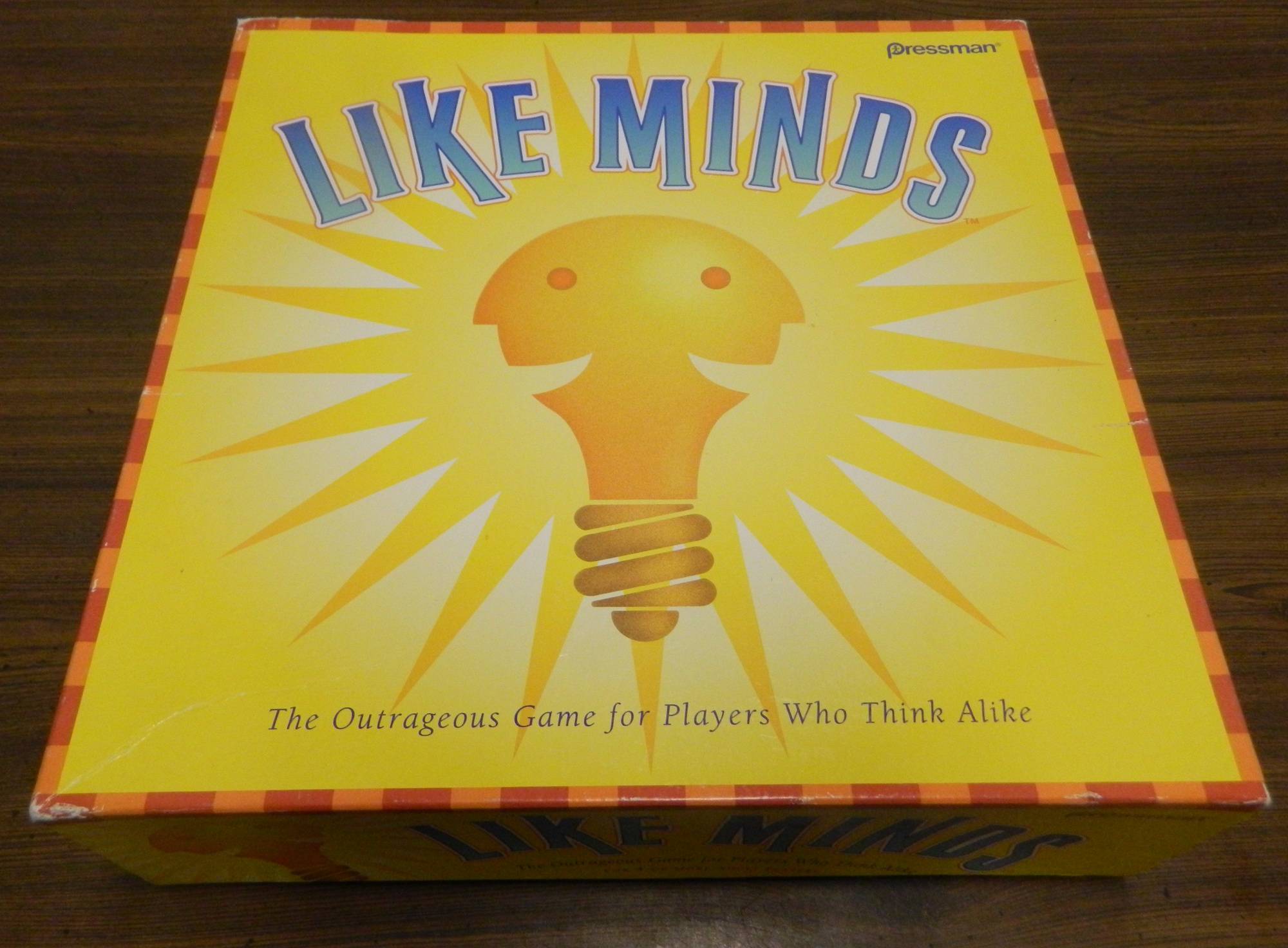 One of the more popular types of party games is the “match your partner” game where partners try to write down the same answers in order to score points. There have been so many of these type of games created over the years that I have played several of these games in the past. The problem with this genre is that many of the games in it are basically the same game with slight tweaks to differentiate them from the other games in the genre. Today I am going to look at another one of these games, Like Minds, which takes the familiar match your partner mechanic while adding in a small speed mechanic. While Like Minds is a very solid party game, it suffers from failing to differentiate itself.

Divide the players into teams of two. Each team chooses a color and places one of the playing pieces on each side of the gameboard. Team members sit across the table from one another. Place the timer, brain, and category cards where all of the players can reach them. Place the two dice inside the dice cup. All of the players take a sheet of paper and something to write with.

Once the players are done looking at the number die, all of the players start writing down answers that match the category for the round. When one player (from the dice side of the table) thinks they have matched the required number of items with their teammate, they grab the brain ending the round. Once the brain has been grabbed no players can add additional answers to their sheet. The players on the number side reveal how many matches had to be made in the round.

Starting with the team that grabbed the brain, the players on each team compare their answers. The team that grabbed the brain needs to match at least as many answers as required by the number die. If they got enough matches they score one point for each match along with a three point bonus for being the team that grabbed the brain. If the team was unable to find enough matches, they receive no points for the round no matter how many matches they were able to get. The rest of the teams then compare their answers and will score one point for each match. For each point earned the player on the side that looked at the dice gets to move their playing piece forward one space on the gameboard. When a playing piece has reached the middle of the gameboard, all points earned will move the other playing piece towards the center of the gameboard.

The game ends when both of the playing pieces of one color have reached the center of the gameboard. Whichever team gets both pieces to the center first wins the game.

I am going to get right to the point, Like Minds is not a highly original board game. We have looked at a lot of board games here on Geeky Hobbies and I would say there have been several games that have played similarly to Like Minds. The “match your teammate’s response” game has been made many times in the past and at its’ core Like Minds is like every other game from the genre. In each round you are given a category and you have to write down responses that you think will match your partner’s responses. Like Minds basically plays like the reverse of Scattergories where you are trying to match your partner instead of coming up with unique answers.

While not highly original, the basic premise of Like Minds creates a solid game. The mechanic is fun enough if played in a party setting with players that actually know one another pretty well. The game is quick to teach to new players which makes it work pretty well with people that don’t play a lot of board games. People who like these type of party games will get some enjoyment out of Like Minds but I don’t really see it working for people that have never really cared for these type of games.

While most of the game isn’t highly original, Like Minds does add one small twist that makes it differ slightly from most of the games in this genre. This mechanic uses the brain to add a speed and risk/reward element to the game. The brain mechanic is interesting because it can be quite beneficial but can also really hurt a team if it is grabbed too early. The team that grabs the brain can gain a pretty big advantage in a round as three bonus points can sometimes double the amount of points you earn in a given round. By grabbing the brain you also stop all of the other players from scoring more points. You have to be quick to grab the brain though since there likely will be a lot of competition in order to grab it.

You have to be careful about grabbing the brain though because the cost of grabbing the brain too early can be pretty high. Scoring no points in a round can lead to a team falling behind pretty quickly. Most of the danger of grabbing the brain too early comes from the fact that a lot of the categories have many potential answers. Unless you are in sync with your teammate you are likely going to come up with quite a few answers that don’t match. Therefore you likely will have to come up with additional answers since you don’t want to rely on having to match every single answer. Figuring out the best time to grab the brain is the most interesting decision in Like Minds.

While I like the idea behind the speed mechanic, I am not in love of the implementation of it. The problem with the speed mechanic is that it seems to play too big of a role in the game. This is mostly due to the fact that the game rarely requires you to get many matches. The game’s die has the following distribution: 1-1, 2-2, 2-3, and 1-4. Therefore the most matches you will ever need for a round is four with most rounds only requiring two or three matches. With so few matches required, most rounds end in around a minute. Players will rarely if ever be able to write down all of their answers for a category. This means that players have to hope that they prioritized writing things down in the same order as their teammate. This also really rewards players who write quickly as each round basically involves players writing as fast as they can until someone grabs the brain stopping the round.

While it wouldn’t work with all of the categories included in the game, I think the game would have been better off using a normal six sided dice. I think the game would have benefited from having longer rounds as matching your teammate would then become more important. With needing so few matches, Like Minds is basically a race to see which team can write down the most obvious answers first. While I don’t mind an occasional speed round, I think having some longer rounds would have benefited the game.

Like with most of these type of games, Like Minds occasionally suffers from arguments over whether two answers should be considered a match. When two players write down the exact same word this is a no-brainer but it becomes less clear when two answers are very similar but are not exact matches. While I would generally recommend just letting close answers be considered matches, I could see quite a few arguments starting when competitive players think an answer shouldn’t be counted. For groups that easily get into arguments about these type of decisions, I don’t know if Like Minds is going to be the best game for you.

As far as the components Like Minds does a decent job but I think the game could have included more. The biggest problem is the simple fact that the game only includes 35 cards. While the cards are double sided and there are six categories on each side, I still think 35 cards is not enough cards for the game. As the cards are by far the most important component in the game, I think the designers could have included more cards. Other than the lack of cards the components are pretty decent and yet are nothing special either. Outside of the dice, the cards, and the brain though I would say the other components aren’t really necessary. The gameboard in particular only serves as a visual representation of how the teams are doing. I honestly think the game would have been better if it just kept score and whatever team has the most points wins the game.

Like Minds is basically the definition of a very average game. There isn’t anything particularly wrong with the game. While I wish the rounds were a little longer, there is nothing that really gets in the way of your enjoyment of the game. If you like party games where you try to match you partner, I think you can have fun with Like Minds. The biggest problem with the game is the fact that it just isn’t that original. Outside of the speed mechanic that slightly tweaks the game, Like Minds plays like a lot of other party games. Most people probably already own a party game pretty similar to Like Minds.

If you don’t like party games where you try to match your partner, I would pass on Like Minds since the game doesn’t rally add anything that makes it stand out among all of the other games in the genre. If you already own one of these type of games and don’t absolutely love the genre, I would probably recommend passing on Like Minds since it is unlikely to be much different than other games that you have played. If you really like this genre of party games though and can get a good deal on Like Minds it may be worth picking up.

2 thoughts on “Like Minds Board Game Review and Rules”