Shuffle the event deck and deal three cards to each player.

Each player gets three life and three bullet tokens. 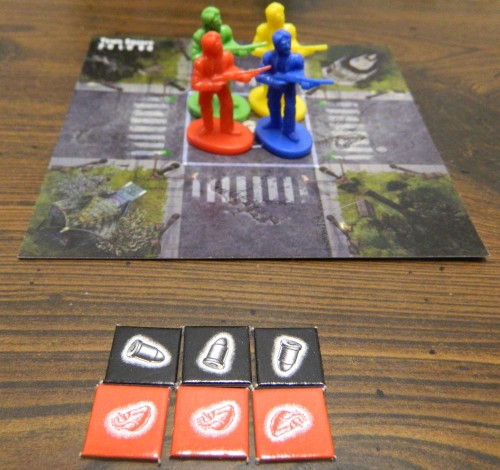 To start the game place the town square space in the center of the table. Each player gets three bullets and three life tokens.

When placing map tiles you must follow a couple rules. Tiles can only be placed next to other tiles. You can rotate tiles in any direction but all roads must connect to one another. A road cannot be blocked by a building.

When playing a tile with a “named” building, you must place a number of zombies, bullets, and life tokens equal to the numbers printed on the card. For example if a tile has “Z-4 L-1 B-2” printed on it you would place four zombies, 1 life token, and two bullet tokens on the tile after it is placed. All of the tokens and zombies must be placed inside the building. The player who played the tile gets to choose where to place the zombies, bullets, and life tokens.

When playing a tile without a named building, you place zombies equal to the number of roads leaving the tile. For example if three roads leave the tile, three zombies would be placed on the tile. 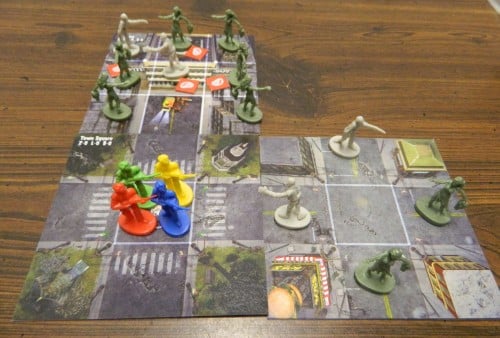 Here are two examples of placing tiles in Zombies!!! The top tile is a named building. The top building had eight zombies and four health tokens that had to be placed in it. The right tile has no named buildings so four zombies are placed on it due to the four roads leaving the tile.

If you draw a tile that can’t be placed since it violates one of the other rules, the tile is discarded. If a situation arises when no more tiles can be legally played, the player who played the last tile loses the rest of their turn. If the helipad tile can’t be played when it is drawn, it is discarded and players can only win by killing 25 zombies.

Players will fight zombies when a zombie is on the player’s space at the beginning of their turn or if the player moves to a space that has a zombie. 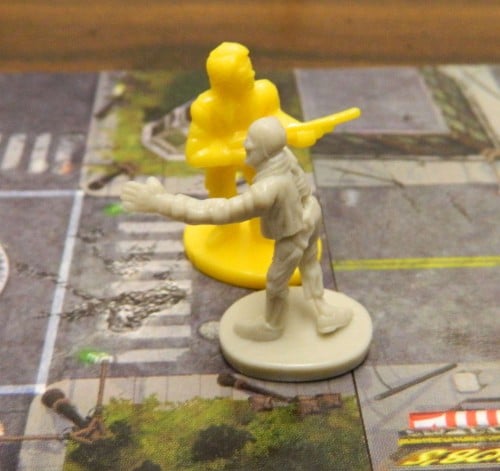 The player rolls one die. If they roll a four, five or six the zombie is killed and is added to the players set of zombies that they have killed. 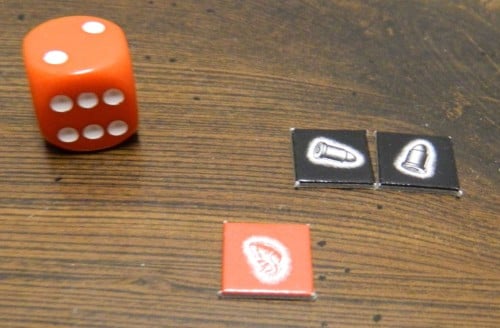 The player has rolled a two. In order to kill the zombie the player had to roll a four or higher. The player could choose to either use a life token to re-roll the die or they could use two bullet tokens to raise the roll to a four.

Combat continues until the player has killed the zombie or has run out of life tokens. A player can never choose to leave combat. If a player runs out of life tokens (dies), all of their movement stops and their token is moved back to the center of town. The player loses all weapons they have acquired and half of the zombies they have killed (rounded up). The player will still move the zombies and can discard a card. On the player’s next turn they get three life tokens and three bullets and the game continues as normal.

After rolling the die, players can choose to move up to the number of spaces indicated on the die. They can choose not to use their full movement roll. Here are the rules human players must follow when moving:

In step five players roll the die in order to determine movement for the zombies. The number rolled indicates how many zombies will move on the turn. For example if a five is rolled, five zombies will be moved. Each zombie is moved only one space. Zombies may not move diagonally and there can only be one zombie on a space at a time.

Here are the two different ways to win Zombies!!! You can either kill 25 zombies or you can reach the center of the helipad tile.

The best way to describe Zombies!!! is a game of potential that it fails to ever reach. While it is a pretty simple roll and move game, the game had the potential to be one of the better roll and move games. The game has an interesting theme and actually does a pretty good job simulating what it would be like trying to survive a zombie outbreak (sometimes to the game’s detriment). The mechanics are pretty simple which makes it accessible to people who have never played the game before. The game even includes 100 little zombie figures, that aren’t the highest quality but pretty good since the game includes 100 of them. Unfortunately few of the mechanics work well which leads to a long boring experience.

The biggest problem with the game has to be the length. The game just seems to take forever to finish with most players wishing it would have ended a lot earlier. If the game was 30-45 minutes I actually think it would have been considerably better. The game is not that bad to start with but it starts to drag at the half hour point. Our game dragged on for about 1.5-2 hours.

So why does the game take so long? I think it is a combination of players dying way too often and the majority of the cards messing with the other players instead of helping you. The game has two ways of winning but these two problems make them much harder than you would think.

We’ll begin with trying to collect 25 zombies. If you use the included rules I don’t know if it is actually possible to collect 25 zombies. It is just way too easy to die in the game. I don’t think you can survive the whole game without dying multiple times. Unless you have the best luck in the world rolling the dice, you will fail a lot of the rolls since you only have a 50/50 shot of actually killing the zombie without any help. The game should have really given you better odds against the zombies. I think the game would have been better if any roll three or higher would kill a zombie.

If the game didn’t want to increase the odds while rolling the die, they could have made health and bullets easier to acquire. The only way new bullets and life tokens are added to the game is if a named building is put on the field or you die. This doesn’t put enough tokens into play. You lose health and bullets a lot quicker then they are put into play. To collect the tokens you usually have to lose just as many or more tokens just killing the zombies that stand in your way to get the tokens.

The combination of these factors means that you will die quite a few times in the game. This wouldn’t be such a problem if you didn’t lose half your zombies every time you died. This means that you pretty much have to kill all 25 zombies within one life since losing half of your zombies would make it very hard to come back. Since I don’t think you can kill 25 zombies without dying, I don’t think you can win in this way.

Now let’s talk about the helicopter escape. While someone will eventually win in this manner since I doubt anyone can win the other way, it is a lot harder than you would think. This is where the cards really come into play. There are too many cards that put additional zombies out on the board that no player is going to have an easy path to the helipad. Unless none of the players are competitive, they can easily add more zombies to the board which will slow down all of the players. This is what happened to our game. There was probably at least 15-20 zombies between all of the players and the helipad. You couldn’t make any progress without killing zombies. The game may never have ended if all of the players didn’t get sick of the game and worked together to try and get all of the zombies out of the way.

This isn’t the only problem with the cards. The game gives players few reasons to hold cards. Since you always draw up to three cards at the beginning of your turn, there is no reason not to get rid of two cards every turn. You should always play a card on your turn (unless you can’t play any of them) and you should always discard a card unless you really like the other two cards in your hand. Since most of the cards adversely affect other players this means that players will be constantly messing with each other.

The idea behind the weapon cards could have been good but it just doesn’t work out. I like that you have to go out of your way to collect them by visiting the appropriate store and in exchange you are rewarded for your trouble. There are two problems with the weapons though. First there are not enough of them. Instead of wasting so many of the cards to mess with other players, the game should have provided players with many more weapon options. The other problem is that the weapons are just too hard to acquire. Maybe it was just how our game board got set up but you had to go so far out of the way just to get to one of the locations to claim one of the weapons. You usually had to fight so many zombies on the way to the weapon that you would likely die before you could even get it.

While Zombies!!! itself was a pretty disappointing game, I hold out some hope for it because it can be combined with Humans!!! to create a unique experience. While I haven’t played the combined game, I looked at the rules and the combined game looks a lot more interesting than Zombies!!!. The combined game seems to play more like a team game where one team plays as the humans who try to escape or kill 25 zombies. Meanwhile the zombies are trying to turn other humans into zombies and kill the other players. Since I have both games I plan on trying this combined game at some point hoping that it actually capitalizes of some of Zombies!!! potential.

Zombies!!! had the potential to be a good game but it just doesn’t work. The game takes way too long, you die way too often, and the game is just pretty boring. Something is missing from the game. The game has the framework to be a good game but the rules included with the game just don’t lead to a good game. Playing the combined game with Humans!!! or using some house rules could fix a lot of the problems with the game but I have to rate the game based on what is originally included with it. If you are willing to try some house rules you could have some fun with Zombies!!! but otherwise you probably are not going to have a lot of fun with the game.

The Last Spike (2015) Board Game Review and Instructions
Click here to cancel reply.